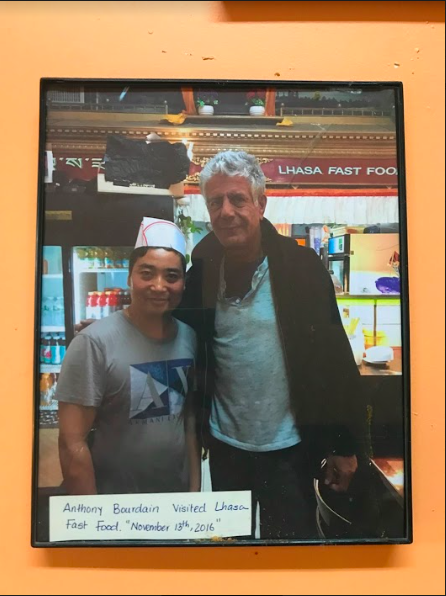 Perhaps one of the most gastronomically diverse neighborhoods in New York City is Jackson Heights, home to an entire collection of Central/Southern Asian food stops ranging from India, Pakistan, Bangladesh, Nepal, Tibet and more. There can be little discussion about Queens’ unique and vivid culinary culture without diving headfirst into this neighborhood – one where you could blindfold yourself, follow your nose and accidentally wander into a cell phone repair shop and find a Michelin recommended restaurant in the back room.

This is not some odd or obscure reference, but rather one directly referring to Lhasa Fast Food, home of nationally acclaimed Tibetan food that was featured on the late Anthony Bourdain’s, “Parts Unknown” series. In all honesty, this was how I first discovered the shop. Anthony Bourdain is unapologetically one of my greatest idols and following in his tasting footsteps is nothing short of a dream come true for a young culture writer who gets a kick out of new and adventurous foods.

Lhasa Fast Food is a small, cash-only restaurant with no street access and no major signage to point the way. For the first few years of its existence it serviced almost exclusively the local community and was a “hole-in-the-wall gem,” if there’s ever been one. Following the fame from the Bourdain episode, foodies from every corner of the city have made their way into town to get a hold of the various styles of momo, diversely spiced lamb dishes ,and delicious homestyle Tibetan soups like thentuk and yellow laphing (all meals roughly $7-12).

Even with its newfound local foodie fame, the staff maintains its base menu, normal customers, and a hidden kitchen. I placed my first order ever at the restaurant (I have returned many times since), and I found myself captivated by fresh beef and chive momo and hot tea while sitting beneath a photograph of Bourdain with the head chef, Sang Jien Ben.

Ben, 42, was born and raised in the Himalayan mountain town of Rebkong –– politically considered the Qinghai Province of China, but historically the nation of Tibet and the birthplace of the 14th Dalai Lama. A portrait of his Holiness holds a respected place, high above the cash register in the center of the tiny and comfortably cramped shop. The walls are scattered with Buddhist philosophical sayings and every decoration is dusted with a sense of nostalgia that Ben carries for his life in Tibet.

Aside from the decorations, there is an intense nostalgia in the cooking as well. Perhaps what makes the Lhasa Fast Food menu so unique and popular among the community is the down-home and almost “grandmother style” cooking from Ben and his limited staff. The recipes and ingredients are all natural, purchased entirely in Jackson Heights, and have not been adapted to meet the tastes or wants of anyone. Ben fully understands that he could add certain basic Chinese cuisine to his menu and attract a wider array of customers, but a lack of appreciation when eating something impersonal steers him away. “It is about cooking like home, it is about you eating and remembering home meals,” he said.

The meals at Lhasa are cooked by heart and memory. They are not served to the customer, rather, they are gifted. In fact, using the term “customer” feels wrong because everyone is treated as a guest. The level of hospitality in this tiny, crowded, and often times hectic shop transcends the service industry and presents you an entreé, paired with a side of a real and truthful experience.

The restaurant itself is only a subway ride away from the St. John’s campus, in a neighborhood too often overlooked. I am adamant that anyone who considers themselves a lover of food, culture and new experiences must make their way to Lhasa. The entire restaurant holds 15 diners at most, so avoid making the trip in large groups. Overrunning the limited seating area ruins the atmosphere and pushes out locals who visit the shop on a daily basis. To enjoy Lhasa Fast Food is to witness Lhasa Fast Food, to find yourself observing Ben’s culture and culinary ode to his past life rather than arriving with demands of attention and a closed mind. So practice using your chopsticks, prepare yourself for intense and evocative spices, read up on the history of Tibet and make way for Jackson Heights where Lhasa Fast Food is waiting with open and welcoming arms.