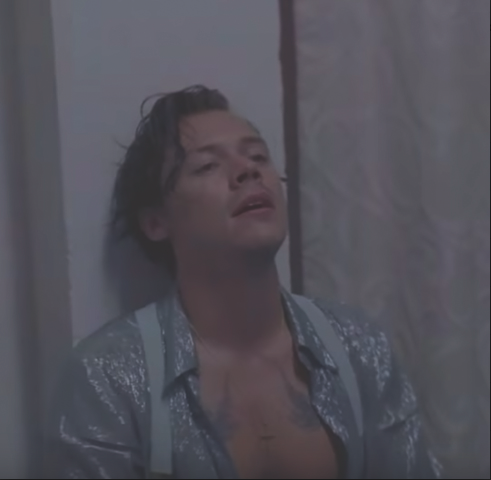 Harry Styles in his new music video, “Lights Up.”

The driving force behind any song that can get you out of your seat is the bassline. It is the bassline that provides that feel-good feeling to your soul. It provides a pathway for the rhythm to spark an influx of serotonin in your brain to let you know that you are listening to a wonderfully good song. Harry Styles (bottom left) delivers this in his latest release, “Lights Up.”

When you hear a good bassline, you know that you will listen to that song on repeat for days on end. In fact, it might be all that you choose to listen to for the following week.

Whether it’s played through your headphones, in your car or through the speaker in your bedroom, there is an addictive quality to a good song. The combination of a melancholy tone, upbeat tempo and funky-yet-subtle bassline are precisely what have allowed Styles to deliver on what is assumed to be the first single off of his anticipated sophomore album.

“It’d be so sweet if things just stayed the same,” Styles belts, inviting us into the chorus of the song, where he tells us over easy strokes of the piano keys that he has found comfort in stepping into the light –– into a new chapter of his life. The groove of the bridge takes us right into the second verse, where the harmonies are angelic enough to make you think that the solfege sounding “La-da-da-da-da” is a work of lyrical genius.

The track, which is less than three minutes long, is enough to demonstrate that fans can expect to hear the growth Styles has undergone over the years in his forthcoming album –– which does not have a confirmed title yet –– since the release of his eponymous album, Harry Styles (2017).