“Fight Club” 20th Anniversary: We Look Back at its Impact on the Conversation Surrounding Masculinity and How It Reverberates Today

"... it can be said that the anti-establishment crowd is always looking for a figurehead to shepherd their ideals to the public and in the 1990s, and today, Durden is an easy choice from a 'manly man’s' film." 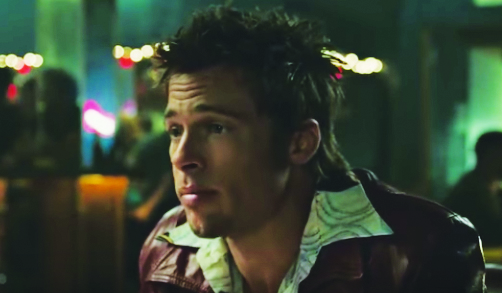 Brad Pitt as Tyler Durden in the 1999 classic, “Fight Club.”

David Fincher’s iconic cult-classic “Fight Club,” inspired by the novel of the same title by Chuck Palaniuk, celebrated its 20th anniversary on Oct. 15. It follows the Narrator (portrayed by Edward Norton), who, while suffering from insomnia and depression, meets, moves in with and starts an underground fight club with the definition of a cool, self-assured cat, Tyler Durden (portrayed by Brad Pitt). For those who have not seen it, I apologize for the spoiler, but Durden is in fact the psychotic break and the manifestation of Id, of the Narrator. Durden is the man that the Narrator wishes he could be: sure of his place in the world, his masculinity, ease, hyper aggressiveness, sexuality and rebellion against authority. However, over the years, the film –– originally seen as a criticism of consumerist culture and in extension, the masculinity crisis –– was subsequently co-opted by radical men’s rights communities online, also known as the “manosphere.”

One Vice writer says, “members of these groups, who congregate around sites like Return of Kings, Masculine Empire, and the Red Pill subreddit, attribute the ills of Western society to the decline of traditional gender roles.” Some of these groups, from “Men Going Their Own Way” (MGTOW) to “Real Social Dynamics” (RSD), focus on the prevalent theme of emasculation by society, supplemented with recurring motifs that include the criticism of men’s support groups –– one of which features victims of testicular cancer –– brutal violence as a therapeutic release, the iconic “no talking about fight club,” and the threat of the removal of testicles. The confident, popular, aggressive Durden became a symbol –– and a pseudonym for some –– of this movement embracing man’s “biological nature.” His ultimate goal reflects this narrative in Project Mayhem, a series of targeted attacks against corporate America and a return to the hyper-masculine, hunter-gatherer society that corporatism (the IKEA culture) destroyed and suppressed in men. Further supported by Fincher in a 1999 interview, “we’re designed to be hunters, and we’re in a society of shopping. There’s nothing to kill anymore, there’s nothing to fight, nothing to overcome, nothing to explore. In that societal emasculation, this everyman is created.” These underground groups add their own misogyny to the pot, one backed up again by Durden as he waxes about the unnecessary need for women while smoking in the bathtub.

However, as discussed in the most recent episode of the NYT podcast, “Still Processing,” titled “Psychobros,” by hosts Jenna Wortham and Wesley Morris, the manifestation of Durden and the hypermasculinity that he entails is a reflection of the Narrator’s mental illness. This caricature of violence, what the ideal man should be, is a disease. It is not meant to be celebrated; even Durden’s fights against the system are surface-level and meaningless, from urinating in soup to blowing up buildings –– none of which have a real impact on the society he despises.

But why was this message lost on certain audiences? Laurie Penny, feminist journalist, writer and author of “The B***h Doctrine,” suggests that it was Pitt’s/Durden’s charisma that overshadows the message that Durden was meant to be frightening and that “a lot of young men really do believe that misogyny itself is a form of brave social rebellion. They associate womanhood with oppression … I don’t think toxic masculinity is a revolutionary force of social change.” The choice of Pitt –– the symbol of unattainable sex symbols of the 90s –– was a deliberate choice, whose aura made the lines, “I look the way you want to look. I f**k the way you want to f**k,” believable. Furthermore, it can be said that the anti-establishment crowd is always looking for a figurehead to shepherd their ideals to the public and in the 1990s, and today, Durden is an easy choice from a “manly man’s” film.

An interesting point in today’s social climate, made by Wortham and Morris, is the contextualizing of this film with ones of similar topic: masculinity and mental illness. Primarily, this can be seen in 2019’s “Joker,” in the manifestation of the imagined relationship between himself and Sophie (portrayed by Zazie Beetz) and affronts to his masculinity in the form of mockery. It raises a question about the types of stories we tell. Similar to “Fight Club,” the “Joker” comes to the conclusion that outsiders in society (keeping in mind, that both figures are white men) are a product of both their innate conditions and societal pressure to “fit in.” In today’s cultural climate in the United States, we are attempting to reckon with the outbursts of violence conducted by white men, who feel as if they were alienated by society. To feature stories that parallel those, we must think critically about those we are subsequently giving voice to.