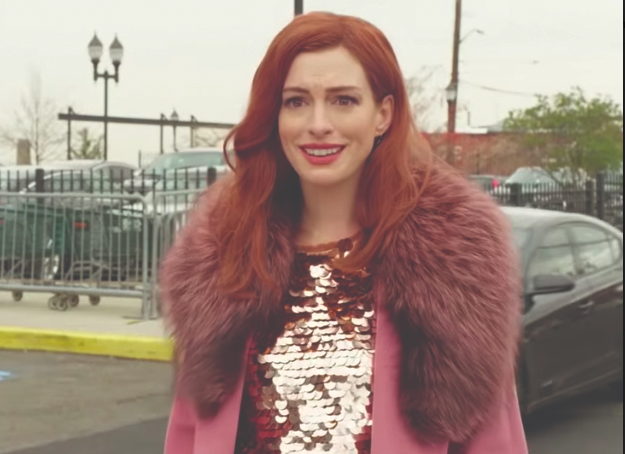 Anne Hathaway stars as Lexi, a woman with bipolar disorder.

The storylines for rom coms are pretty much the same: the two main characters meet each other in an unusual scenario. Whether one of two characters places a bet on who can get the other to fall for them in a limited number of days or the two have to pretend to be a couple to save face in front of family, rom coms usually end with both being happy together.

Written and directed by John Carney, “Modern Love” is an Amazon Prime original series that tells true love stories that have bloomed in New York City through a wide range of relationships that aren’t always platonic. The show is inspired by the New York Times column bearing the same name that has also been revived as a podcast and a book.

“Modern Love” stars renowned actors such as Cristin Milioni, Dev Patel, Anne Hathaway, Tina Fey and others. All eight episodes of the first season tell a different story chosen from the 750 column-archive. The opening credits start off with a note stating that certain elements are fictionalized.

The first episode, named “When the Doorman Is Your Main Man,” from the column written by Julie Margaret Hogben, tells the story of a young female named — in the show — Maggie who has a close, friendly relationship with her doorman, Guzmin. Oftentimes when she’s on a date, she experiences the father-figure disapproving response from Guzmin.

In the end of the episode we get a glimpse as she returns from California for a visit. She and Sarah arrive in a cab to the apartment — with a surprise male friend.

Soon as Maggie’s partner goes to meet Guzmin and ask about the test that he’s been told she needs to pass, Guzmin says, “you passed it.” Guzmin whispers in Maggie’s ear, “I was never looking at the man, Maggie, I was looking at your eyes.” This tearjerker scene isn’t written in the column or featured on the podcast.

One other aspect noticed in comparison to the column is that the doorman’s name is written as Guzim but is said as Guzmin throughout the episode, which is quite a strange decision for the episode, especially if the character is a real person. Nonetheless, the delivery by the actors was very effective and it was touching to see the relationship between Maggie and the doorman — a true friendly father figure.

Other episodes explore love through friendship, self-love, loss and even through a strange narrative of a young woman conversing with an old man about her fatherless life that results in miscommunication.

An episode featuring Anne Hathaway was the most striking. She strongly portrays the role of a woman with bipolar disorder as she wakes up in the morning with great positivity and exhilaration open to new experiences until the day is over and she sinks into her bed struck by depression with no way out. Her battle with her disorder keeps her from letting anybody in until she opens up to her friend for the first time.

Another episode about the adventure of a male gay couple struggling to adopt a baby explores a riveting story about the couple adopting from a young rebellious homeless woman. The young woman, Karla, played by Olivia Cooke, strongly delivers her role as an independent woman unprepared to raise a child, bitter about the world, but changing her perspective as the couple opens her up to a world of love and opportunity.

Many critics say the show lacks originality in expressing anything new to say of modern love. An article in the Atlantic said that the show demonstrates “love simply exists.” I agree that the message isn’t understood as something novel, but I didn’t take this as a negative.

What intrigues me the most about the show is the telltale stories that take place in New York. There’s a fantasy built around the way life moves in the city, especially when it’s centered around stories in films and books about writers, journalists and others that are true and relatable. The show explores stories of mental health, homosexual relationships and their struggles, long term relationship fallouts and more. We’re taken around true stories of different experiences that all occurred in just one city that are likely to connect in cities around the world.