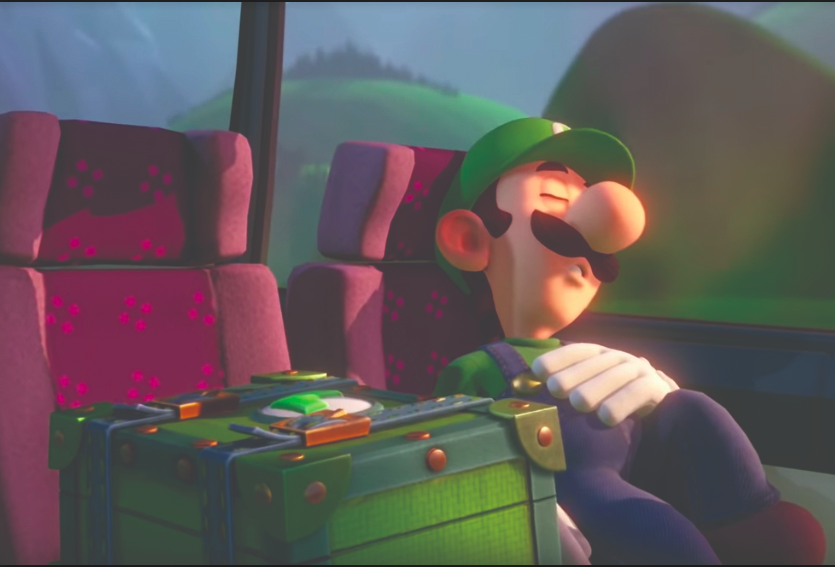 Luigi asleep on the bus en route to “The Last Resort.”

For the first time on a home console since 2001, prepare to endure ample Halloween horrors with Luigi, Mario’s beloved, perpetually frightened brother in “Luigi’s Mansion 3.” In search of a third haunted mansion premise, Mario, Luigi and Princess Peach decide to vacation at a totally normal and vacant hotel, with totally normal, floating, mask-wearing bellhops.

In an unforeseeable twist, the group sans Luigi is kidnapped, leaving the clumsy brother and his ghost-devouring vacuum to rescue them from the phantoms and slapstick horrors that prowl about the resort. Well, “horror” is a strong word.

The greatest scare of the game is undoubtedly the first ‘game over’ screen, which asks to “restart” from the last autosave, words that at first glance made my heart leap after hours of progress.

The newest addition is Luigi’s sidekick/existential nightmare “Gooigi,” an equally emotionless and gelatinous clone of the moustached hero. The stoic, squishy doppelgänger can be spawned at will to help solve puzzles (or for two-player co-op), without the boundaries of Luigi’s bulky, mortal frame weighing him down. His functionality isn’t groundbreaking, at best deepening the familiar gameplay and at worst slightly dragging the game out.

In a world beleaguered by the corporatization of video games, it’s reassuring to see that Nintendo is still committed to modernizing gameplay while maintaining the spirit of their older work. Controls are smoothly adapted to the Switch and thankfully don’t tamper with one of the greatest additions of the second game: not just one button with which to aimlessly yell “Mario” in the dark, but three.

Despite not charting any particularly new territory, “3” sets itself apart as the likely best in the “Luigi’s Mansion” series, improving on the shortness of the original and the segmentation of the second, with superior pacing and level design.