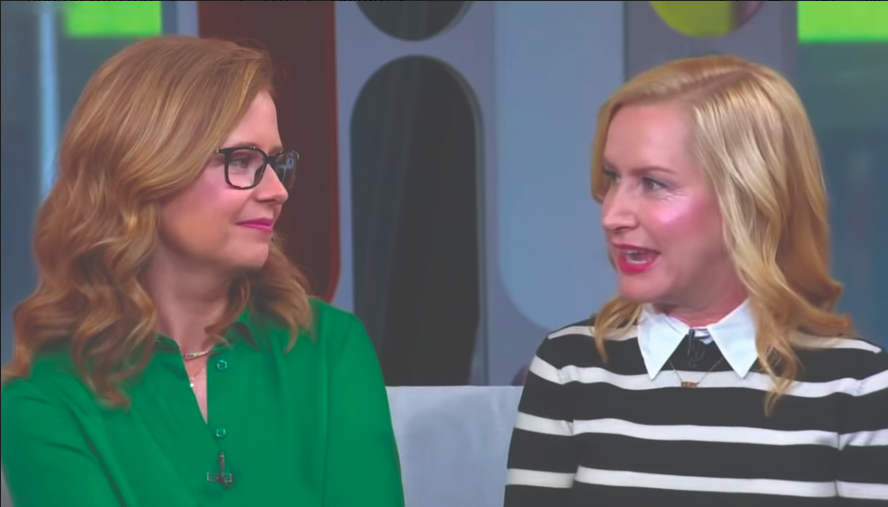 (Left to right) Fischer and Kinsey promote their new podcast, “Office Ladies,” on the “Strahan, Sara and Keke,” an ABC daytime talk show.

Have you seen every episode of “The Office” eight times? Do you weave quotes from “The Office” into your conversations? Are you an “Office” superfan? If you answered “yes” to any of these questions, then you must listen to this podcast.

“The Office” stars Jenna Fischer and Angela Kinsey (Pam and Angela respectively) joined together to create a podcast called “Office Ladies.” Fischer and Kinsey call it “the ultimate Office rewatch podcast,” where they talk about what it was like working on the show and share behind the scenes stories and fun facts about the episodes. The podcast premiered on Oct. 16. A new episode is released every Wednesday. The episodes are approximately an hour long and can be found anywhere that podcasts are available.

Each week, Fischer and Kinsey break down a different episode of “The Office,” starting with “The Pilot.” They begin with what Fischer likes to call “Fast Facts” about the episode, in which they go through an episode scene by scene to give exclusive behind the scenes stories. They discuss the cast dynamic, character development, deleted scenes and more. For example, Fischer and Kinsey revealed that there was a six-month gap between filming “The Pilot” and “Diversity Day” because they were waiting for the show to be picked up by a network. The ladies also plan to bring on other stars of “The Office” as guests and have already spoken with Rainn Wilson, who played Dwight, regarding the episode “Healthcare.”

If “The Office” is your favorite television show of all time like mine, you won’t want to miss this podcast. I have been a huge “Office” fan for a long time and this podcast exceeds expectations. It made me fall even more in love with the show. It is hilarious, fun and interesting. You will learn a lot about the show that you can’t hear anywhere else.