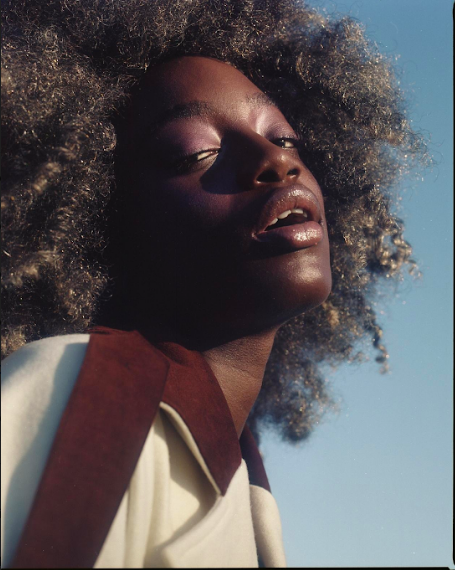 Magdèlene Barjolo, an entrepreneur, documentarian and model, discusses the battles she’s faced and how she is empowering her community through her work.

Liberian-American psychology major and fashion model Magdèlene Barjolo is taking on more than the fashion industry –– she’s also tackling subjects that she believes need to be highlighted within her community. This past summer, Magdèlene worked on a documentary called “Don’t Play in The Sun” which highlighted the issue of colorism within the African diaspora. She filmed the documentary alongside Omari Graham, Jermaine Dyson, Wayne O’Hara-Reid and Brenna Lipset.

Magdèlene who is a senior and will be graduating soon has plans for several creative pursuits in the future and plans to continue to shed light on issues that are relevant to her community and expanding her non-profit organization. I sat down with Magdèlene in Rome where she is currently studying abroad to talk about her creative process, her upcoming projects and her plans for her career in the future.

Where did you first get this idea for your documentary “Don’t Play in The Sun”?

I got the inspiration for “Don’t Play in the Sun” from my personal life and my battles with colorism. I also was inspired by social media and the influence your voice has on platforms like Instagram and Twitter, and how people can really express themselves, state their own opinions and talk about their trauma. After Beyoncé did the “Brown Skinned Girl” video and also leading up to that point, there has been a lot of discussions about colorism and anti-blackness within different communities. I noticed that a lot of people who were talking about colorism weren’t dark-skinned people or whenever dark-skinned people would talk about colorism there was always some type of

It wasn’t fair to dark-skinned people and our voices weren’t being heard. My friend’s grandfather also gave me the Willie Lynch book which was a black horror story to me that showed me that colorism is a by-product of racism and a tactic that was created to oppress black people. Therefore, I wanted to create a short film where you could just see the faces of the people who are being impacted by this idea that when you’re darker, you’re not beautiful.

You mentioned Beyonce and Willie Lynch. Who are your other influences and where do you draw inspiration from?

I would say my daily life, my interactions with people, different events that I’ve gone through in my past. New York in itself influences my creative process because I’m constantly around creative people. I’m constantly being fed different things. New York is a melting pot of different people, different personalities and cultures. So once you move to New York, once you step outside, you’re constantly being exposed to things that are different from yourself. It taught me to embrace and take inspiration from other cultures and to embrace my own culture because before I came to New York, I’ve always been taught to be unapologetically black, but I wasn’t always unapologetically African.

Do you believe that your cultural background influences your art? How so?

Yeah, I think my culture does influence a lot. I’m Liberian and also Ivorian and I think that Liberian culture and also black culture for me coexist together, simply because of our history. I get a lot of inspiration just from the history of Liberia and just by having the family that I have and seeing the powerful women that come out of Liberia. It constantly inspires me to step in my purpose and step within myself confidently. We were the first country to have a black female president in the continent of Africa so I feel like just having that type of role model to look up to was another form of inspiration to continue to do what I do unapologetically.

Do you believe that your time at St. John’s has influenced your creative pursuits?

I think my time at St. John’s did help me because while I didn’t take any courses or any classes when I started tapping into my creative process that aided me, I feel as though  St. John’s helped me realize this is who you are. When I came to St. John’s I was trying to force myself to be something I wasn’t. I was trying to force myself to be in the medical field because as African as an ethnic person, healthcare, law, any type of profession that’s guaranteed money is seen as the best thing but it’s not always the best thing, for you. So when I came in as a bio major, I switched to chemistry. But when I started taking psychology courses and switched my majors, I was able to put myself in a setting where I was more flexible and able to be free. I think that helped me figure out not only what I didn’t like, but also who I was. At St. John’s I was able to start Sending Her Essentials, which is a nonprofit that I started with my best friend, Alexandria Ligon.

Tell me more about your nonprofit.

Sending Her Essentials (SHE) is a nonprofit organization dedicated to ensuring that all women nationally and globally have the essentials they need to accelerate in their academic, professional and social lives. We’re advocates for menstrual health and menstrual hygiene, so we educate young girls and women on their menstrual cycle, different myths and different misconceptions. We also work towards condemning the stigma of having your monthly period. So we’re big advocates on that, and we intend to do that within the state of New York, within DC, Massachusetts and in the content of Africa and throughout the world.

What are you working on right now?

Right now, I’m working on a documentary on African immigrants in Italy and their experiences here. I was inspired by that, just due to my experience of being a black woman in Italy and how I felt when I first got here because I heard a lot of misconceptions and different ideas about the treatment of black people in Italy. I didn’t know much about xenophobia. I had a friend who was in Italy a few years ago when things were worse and when I told her about my experiences with microaggressions, she shared her experiences with me.

That really inspired me because I was like, wow, if I’m dealing with this and I just got here, what are the lives of the people who have been living here for years? They’re here because they have conflict back home in their own country, so I originally wanted to conduct an interview, just by talking to them, but I felt like I wanted to make a short film so you could see the people that are being impacted by xenophobia. So right now I’m working on that documentary alongside videographer Alec Fox and photographer Daniel Perez.

On top of that, personally, I curated a platform called Hearing Aid and basically the Hearing Aid is a documentary platform which I curated with my friend Brenna Lipset  and we’re going to be giving a voice to marginalized people. And we’re going to be using Instagram to do so. So the short films that we’re creating the documentaries, the stories of people that are being silenced will be published on the Hearing Aid.

What specific message do you want to send with this documentary?

These people have people that love them, and they’re also capable of being loved and giving love and they should receive that same love. I feel like my overall message is to see the human being in someone and not their situation.

What have you taken away from this process? What insights have you gained?

I think this documentary made my heart softer. It made my heart more open to people –– open to loving people. I see now that when I first got here, I was kind of guarded, but now when I see people, and I look in their eyes it’s just, wow, I see you, and I want people to know that I see them.

A lot of the immigrants here are just kind of ghosted. They walk in the street and people kind of just, step over them and they just have no identity here. And I want them to know that I see you, and I see that you’re worthy of being seen.

What projects can you see yourself working on in the future?

I think I want to talk about the LGBT community in the African diaspora, I think that’s really important. I also want to talk about religions and how people have negative connotations with certain religions. Also, I’ve been watching this show called “Pose,” and it’s been advocating a lot about the LGBT community and HIV so I think it will be dope to highlight that. I would also love to possibly talk about Muslim women and highlight their struggles too and strengths. Maybe one day I’ll even cover Native Americans and the appropriation of their rituals and culture.