Notable Novels: “Nothing to See Here” by Kevin Wilson 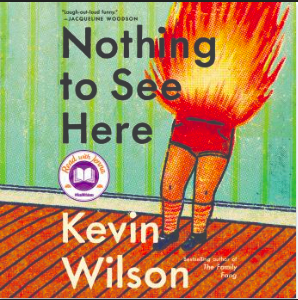 The audiobook cover for the November publication of “Nothing to See Here,” by Kevin Wilson.

We all have moments when we feel red hot with anger. Sometimes we throw temper tantrums and meltdowns. For the most part, we are able to deal with those emotions, but imagine spontaneously combusting –– your body catching fire –– because of your anger. The children in the novel  “Nothing to See Here,” by Kevin Wilson, experience this wild side-effect of anger. Don’t be deterred by the children in the story –– this is a novel for adults.

Ten-year-old twins Bessie and Roland Roberts have plenty to be upset about; their mother just passed away and they are moving in with their politician father. Their stepmother, Madison, recruits an old friend, Lillian, to come live with them as the children’s nanny (or, as Madison calls it, their “governess”). The two women haven’t seen each other since Lillian was kicked out of boarding school as a result of taking the blame for something Madison did. When Lillian receives the invitation, she feels she has nothing to lose and her awkwardness, paired with the twins’ uniqueness, makes for a surprisingly sweet oddball family.

Initially, I was dumbfounded at the thought of children just catching fire when they get upset. It’s normal to them and has been a frequent occurrence in their young lives. The fire doesn’t actually seem to hurt or damage their bodies, which is odd and unrealistic. I looked up spontaneous combustion, and most people that this happens to end up dying, but not in this novel.

Lillian and Madison had an estranged friendship and I think it was really nice of Lillian to pick up her life and help Madison despite what happened in boarding school. Madison seems eager to keep up appearances and is only looking out for herself; I grew to dislike her character as the story went on. The relationship between Lillian, Bessie and Roland is heartwarming and ultimately won me over in this book. Their determination to live life unapologetically on their terms is something to be admired.

The themes of family and being yourself make this an ideal book to discuss at the Thanksgiving table. “Nothing to See Here” is a short, beautifully written book with meaning to each word. This is Wilson’s fifth book, which has been named one of Amazon’s Best Books of November 2019 and is the November book for NBC’s Today Show Read with Jenna Book Club, led by Jenna Bush Hager. Readers can follow along on the book conversation using the hashtag #ReadwithJenna. Happy reading!