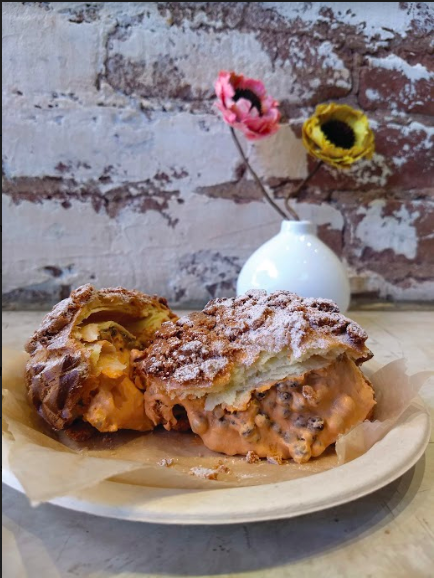 New York City is a playground for foodies with carefully crafted confections on every street corner. Alimama, a dessert restaurant in Manhattan’s Chinatown at 89A Bayard Street, opened in late February of 2018. Boba, also known as “Bubble Tea,” has been on the rise in recent years, but Janie Wang, the owner of Alimama Tea, has revolutionized the Taiwanese drink by whipping them into deliriously delicious pastries.

I learned of the pastry shop through pictures of Alimama drinks and mochi donuts on artist Leon Karssen’s Instagram story. On a whim, I decided to trek from Queens to Chinatown to see if the taste truly lived up to its appetizing appearance. I distinctly remember ordering the signature Boba Milk Tea Cream Puff ($5) and a White Peach Sencha drink ($5). I initially thought the food was a tad overpriced, but the moment I took a sip of the drink and a bite of the pastry, I suddenly understood why so many people before me were willing to hand over a Hamilton for two pastries.

The second time I went to Alimama, it was to try their Thai Tea Boba Cream Puff, which is one of the best things I’ve eaten in NYC. The ratio of cream to dough is perfect. The crust itself is delicate, buttery and flaky, with some powdered sugar at the top. Despite the messiness that may ensue as you scramble to eat this pastry in its entirety, it is absolutely worth it.

I had the opportunity to speak with Wang about Alimama Tea. She describes herself as a creative person, who was always interested in the arts — particularly mixing and matching, whether it be paints or flavors. Her inspiration for Alimama was boba. Wang wanted to create something that tasted just like the drink, but was also new and exciting.

In addition to the very tasty treats that Alimama bakes, the interior decor is eye-catching with warm-toned flowers and gold accents. There’s also a space for people to sit, talk and enjoy the food itself. Wang didn’t hesitate to acknowledge that the friendly and welcoming atmosphere the staff emanates is what makes Alimama unique. “It’s the little things that make a difference; we try to be as inviting as possible to anyone who wants to try our foods, which is why we have both gluten-free and vegan options,” Wang said.

Alimama is an environmentally conscious shop; they use paper utensils and straws, as well as compostable boxes to pack the pastries. Wang mentioned that although it is expensive, it’s worth it. “I have the ability to control what is wasted. Although I’m only one person out of a billion, my action matters,” she said with both pride and confidence. In regard to her plans for Alimama in the future, Wang takes it day-by-day because spontaneity is both a part of her personality and it is what drove her business to be so successful. If she were to open another shop, it would be in downtown New York City. I highly recommend Alimama Tea to anyone looking for trendy and tasty food, authentic drinks and friendly service that they can’t get anywhere else. Janie Wang, the owner and chef of Alimama Tea, is exceptionally kind, caring and clearly has a passion for the food she makes. For boba lovers, I guarantee that you’ll regret not trying Alimama.