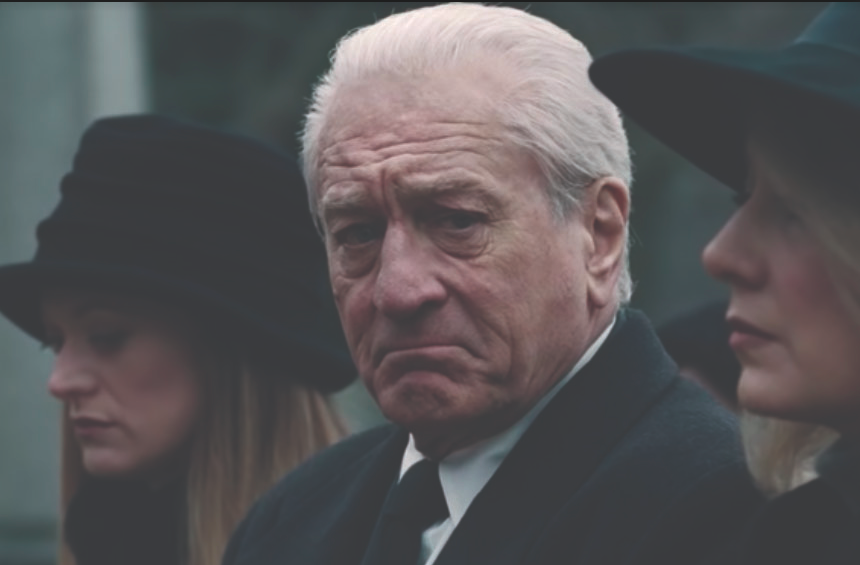 Robert De Niro stars as Sheeran in Netflix’s “The Irishman,” a tale of organized crime.

Martin Scorsese’s pedigree of work has earned him the title of the greatest director in the history of American cinema. From “Raging Bull” to “Goodfellas,” to Michael Jackson’s “Bad” music video, Scorsese’s work has left an indelible mark on American pop culture. “The Irishman” is his latest triumph, which boasts a three-and-a-half-hour runtime and the biggest budget of his career. It is a morose, composed tale of the thrills and tragedies of mob life and its devastating aftermath.

“The Irishman” is based on the 2004 book, “I Heard You Paint Houses” by Charles Brandt. It’s a narrative with confessions of the crimes of Frank “The Irishman” Sheeran, a hitman for the Bufalino crime family, who was close to the enigmatic Teamsters Union head, James “Jimmy” Hoffa. With a priceless cast headed by Robert De Niro as Sheeran, Al Pacino as Hoffa and Joe Pesci as Russell –– the head of the Bufalino family –– “The Irishman” tells a sprawling tale of death and tragedy in the world of organized crime. Hoffa, pursued by Attorney General Robert F. Kennedy, went missing in 1975 and was never found. Al Pacino delivers a fitting performance for such an elusive figure in American history.

De Niro is refined as the often ruthless Sheeran, expressing the brutality of his work with a stark froideur. The film’s most endearing performance belongs to Pesci who not only came out of semi-retirement for the role but also leaves his usual histrionics for his iconic role as a reserved, calculated boss not daunted by the task of eliminating Hoffa. De-aging effects are used to mostly great effect to portray the seventy-six-year-old De Niro as a mid-forties Sheeran with pale blue eyes.

​While mafia life has often been portrayed as glamorous throughout American media, Scorsese abandons the luxury it’s associated with and focuses on its wake of destruction. The film has the recurring motif of introducing a new character along with when and how they met their grisly deaths. A sense of eventual perish is emphasized throughout the film, sparing no detail to the constant sense of unpredictability in this twisted underworld where loyalties spanning decades dissipate.

For such a violent era in American history, this can’t help but feel fitting, as the mafia has largely died down now. One of the film’s best reflections on the toll of this harrowing life is reflected through the isolation of Sheeran’s daughter Peggy, who grows fond of Hoffa.

As Sheeran ages decrepit, he ultimately ends up as a forlorn figure, failing to reconcile with Peggy –– who suspects the blood on his hands –– and his choices. While Sheeran’s accounts were largely debunked, the mystery of what will ultimately happen to Hoffa adds a hint of suspense to the film.

​Scorsese has added to his repertoire of excellence with a film that towers above today’s releases. To see these iconic actors who have shared the screen throughout the years, adds to the malaise of the film as the viewer can’t help but wonder if this is indeed the final time.

Paradoxically, viewers are delighted that Scorsese finally directs Al Pacino. “The Irishman”’s malaise parallels a bevy of tales that have defined some of the film’s greatest careers without sparing harsh realities of an end to an era.