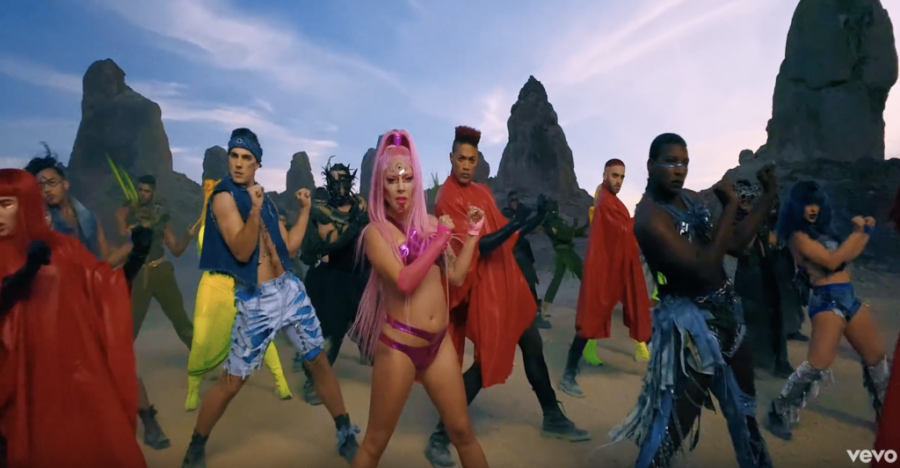 Lady Gaga’s new single “Stupid Love” was released at midnight on Feb. 28. After her astounding “A Star is Born” success and the remarkable launch of her makeup line, Haus Laboratories, fans awaited a long-overdue pop song from the legend.

This pop song features amazing synth beats and strong disco vibes as well as Gaga’s unforgettable resonant voice. Overall, the sound is beautiful as it spreads the message of love and coins Gaga as the “Kindness Punk” in her music video.

The first scene of the video sets the the tone with captions saying, “The world rots in conflict. Many tribes battle for dominance. While the Spiritual ones pray and sleep for peace, the Kindness Punk fights for Chromatica…,” right before it dives straight into the song. “Chromatica” references the name of Lady Gaga’s sixth album and fans are excited to see more of “Kindness Punk” in future releases.

The colorful  music video shows groups of crazy-costumed aliens who dance along to a rapid background beat with Gaga, who is clad in pink and ready to stop anybody near her from fighting. This resonated well with Gaga’s image of grounded self-love and unity amidst colorful  chaos, something that was foreign and alien-like to her viewers back in 2010 but is now welcomed and celebrated today.

Some fans point out that the sound of the new song has a strong similarity to her song “Born This Way” with its catchiness and fast-paced beat that makes listeners want to move while hearing it.

“Stupid Love” is a strong reminder of what Gaga preaches and will continue to showcase in her music consistently. “All I ever wanted was love,” she sings loud and proud for all her fans and viewers to hear. This song is very much needed in a time of conflict and tension as it serves to reiterate the message of loving each other.