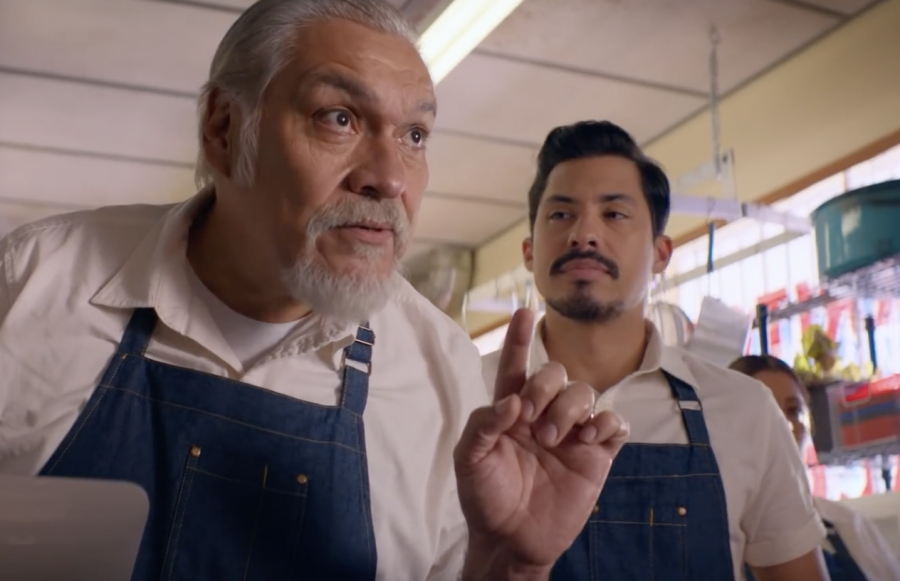 (Left to Right) Pop (played by Joaquín Cosio) and Chris (played by Carlos Santos) ask a customer to leave a nice review for their restaurant, Mama Fina’s. PHOTO COURTESY/YouTube Netflix

Gentrification — we know what it’s about. To some, it’s an opportunity for improvement and renovations, but to others, it’s a means of wiping out lower-class residents and unique culture from their neighborhoods. Netflix’s original bilingual series, “Gentefied,” released Feb. 21, is a clever play on the words “gentrified” and “gente,” (“people” in Spanish). It portrays the issue of gentrification as a family within the predominantly Mexican-American Los Angeles neighborhood of Boyle Heights aims to keep their business running by changing their menu to attract new customers.

Created by Marvin Lemus and Linda Yvette Chávez and executive produced by America Ferrera, the series follows the story of a Mexican-American family who own a beloved taco shop and are threatened to conform to the rapid changes of the neighborhood — like the increase in rent of the shop or the odd request of customers to fuse traditional mariachi music with hip-hop.

What starts off as a quirky comedy, develops into a heartfelt drama. When watching the show for the first time, it’s unclear whether the show is one to laugh, cry or inspire a revolution. 30 minutes’ worth of 10 episodes is too short and quick to take everything all in but just enough to finish wanting more.

Other than gentrification, the series tackles topics of feminism, racism, stereotypes, homophobia, unfair working conditions and gay brown love as it covers the story of each character, along with their Latinx friends and lovers. Casimiro “Pop” Morales is the widowed owner of “Mama Fina’s” taco shop. He is also the only existing father figure for his granddaughter, Ana Morales and two grandsons, Chris and Erik Morales.

Ana is a queer artist in love with Yessika, Boyle Heights’ ultimate resistance fighter. Erik is a book lover and co-chef of Mama Fina’s who’s also in love with his baby momma, though he is insecure of his worth for her. And Chris, unlike his cousins, didn’t grow up in Boyle Heights. Instead, he grew up in Idaho and moved to Los Angeles to work at a fancy restaurant. To his family and others in the show, he’s too “gringo” to be a “real Mexican.”

Much like other Latinx-focused series such as “Jane the Virgin” or “One Day at a Time,” this show offers different perspectives on modern society through the different generations present.

The diversity between LGBTQ and white-passing Latinx is often a conversation of authenticity amongst communities. Am I a fake Latinx? Many Latinx shows raise awareness about the confusion surrounding Latinx identity. It opens up the question as to what it means and what it takes to be a real Latinx.

The Morales family struggles to decide whether gentrification is something to fight against or work with. The series questions the concerns of gentrification  — do what you have to do to support your family or actively fight against it? There’s constant ambiguity between the idea that change is either good or that it means forgetting the unique culture that was brought in by immigrants and their families.

What happens when a carne asada taco is not enough to satisfy the taste buds of a community of white hipster customers? The business that ultimately worked to feed the family slows down and the next step is to develop a cultural fusion restaurant that instead sells watermelon radish carne asada.

For people like me, a Latina who’s grown up in a Latinx-centered neighborhood and has exposed herself to other cultures around the Queens borough, gentrification has been a rising factor. Sometimes it’s hard to see when it occurs right beneath you but when you are made aware, the fate of Latinx communities comes into question. Although there’s nothing wrong with diving out of your cultural comfort zone, remembering your roots provide grounding throughout the sudden shifts.