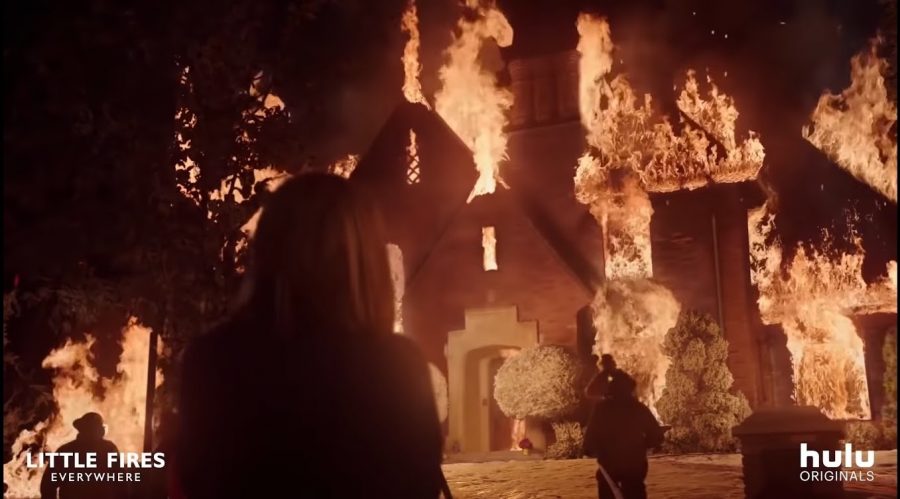 The opening scene of Hulu's "Little Fires Everywhere" is that of the Elena (played by Reese Witherspoon) witnessing the unfortunate destruction of her house. PHOTO COURTESY/ YOUTUBE HULU

In the midst of the coronavirus shutdown, one might think it would be nice to revisit simpler times –– say, the 1990s. While family drama, motherhood, race and class issues exist regardless of the decade, Hulu’s “Little Fires Everywhere” provides the comfort of nostalgia with a flashback to life in the fall of 1997. Based on the bestselling novel by Celeste Ng, this limited series (which premiered on March 18) will have a total of eight episodes that tackle timeless issues.

Reese Witherspoon plays tightly-wound, perceivably “perfect” white journalist Elena Richardson, and Kerry Washington stars as Mia Warren, an African-American artist suspicious of everyone and everything around her. In the first episode, the opening scene is that of a house in flames, and a horrified Elena is looking upon the demise of her home. The show then goes back four months to August 1997, when Mia and her daughter Pearl (Lexi Underwood) move to Shaker Heights and rent a duplex from landlord Elena. Mia and Pearl quickly find themselves interwoven with Elena’s family. Pearl befriends Elena’s children and Mia accepts a house helper (essentially a maid) position in the Richardson’s home, resulting in both Mia and Pearl being at Elena’s house on a daily basis after school.

Elena and her husband Bill are raising four high schoolers: senior Lexie, the homecoming queen dating an African-American boy and seemingly following in her mother’s perfect footsteps; junior Trip, a popular athlete who has a “thing” for girls named Jen; sophomore Moody, a kind and quiet young man who first gets to know Pearl; and freshman Izzie, the angst-ridden baby of the family who is battling rumors around her sexuality. Pearl is intelligent and friendly, aware of what she and her mom don’t have, but accepting of it. The Richardsons are clearly wealthy and the Warrens are not; as an example, Moody gives Pearl a bicycle because she doesn’t have one, but Mia makes her return it, and later builds her a bicycle out of second-hand parts.

The stark differences in each family’s privilege, race, class and finances are painfully evident and quickly become a point of contention between the two mothers. It becomes clear that Mia is running away from something or someone, and Elena uses her journalistic skills to find out.

The drama among the children becomes secondary in the Hulu series, with the primary plot being the chemical reaction between the two mothers. The music is a welcoming throwback to the greatest hits of the time, and butterfly clips, the Spice Girls and crop tops are featured throughout. Although the series falls short of being scorching-hot (Elena’s narcissism grows tiring as she wedges her way into situations), “Little Fires Everywhere” is ablaze with suspenseful plots and a strong cast. It just might provide the nostalgia for the late 1990s that viewers are searching for.