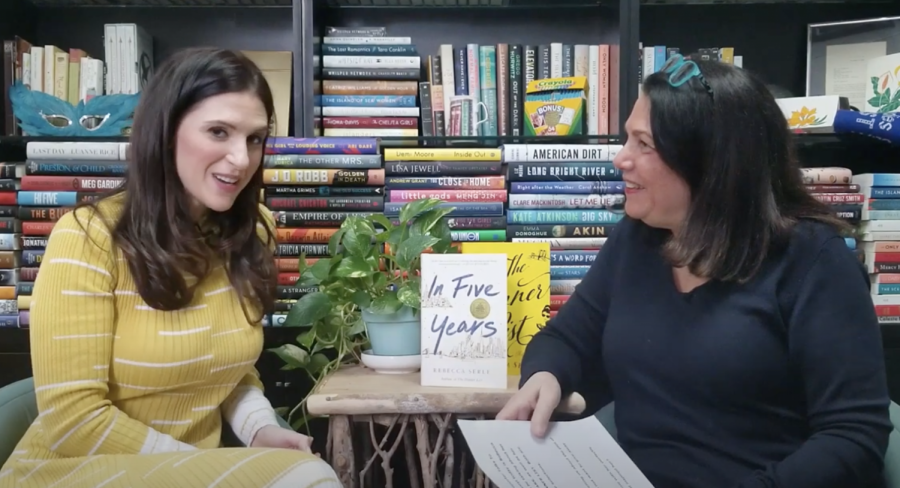 Author Rebecca Serle (left) discusses the character development in her latest novel, "In Five Years," in an interview with The Book Reporter Network. PHOTO COURTESY/ YOUTUBE THE BOOK REPORTER NETWORK

“Where do you see yourself in five years?” This is often used as an interview question or talked about among friends. Author Rebecca Serle explores this popular question in her latest novel, aptly titled “In Five Years.” Dannie Kohan, the 28-year-old protagonist, has the best day ever –– she lands a new job after a successful interview and her boyfriend, David, proposes to her later that evening. She falls asleep in a state of bliss only to wake up in an unfamiliar apartment with a different guy –– not her fiancé, David. When she looks at the television, she sees the date on the screen –– it’s five years later. What happened?

She awakens, for real this time, and she’s back in the world she knows. Dannie tries to shake it off as a dream, but that five-year jump sends her into a tailspin. Was it just a dream? Who was that mysterious guy? Life goes on, 4.5 years pass, and Dannie still hasn’t married David. However, Dannie’s best friend, Bella, has recently started dating someone new –– the guy from her dream nearly five years ago.

Serle weaves a dramatic, thought-provoking story that tugs at readers’ heartstrings. There’s romance, humor, friendship, heartbreak and hope. Dannie is a “Type A” personality who has her future planned and is following a very narrow path. The dream she had impacts nearly every decision she makes in her life afterward (such as whether or not to go to therapy), and slowly the life plan she had set for herself goes awry. Anyone who has ever had their life planned out and watched it take a different route will likely relate to this story. Although the romantic relationships are a large part of the story, the most meaningful relationship is that of Dannie and Bella, who are life-long best friends. The authenticity of their friendship, deep love and history will likely make readers reflect upon their own friendships.

Clever, powerful and moving, this quick read (less than 300 pages) will linger in your mind long after you finish it. “In Five Years” is a Good Morning America, FabFitFun and Marie Claire Book Club selection and is available as a hardcover, e-book and audiobook.