Netflix tries to emulate Disney in animated film “Over the Moon” 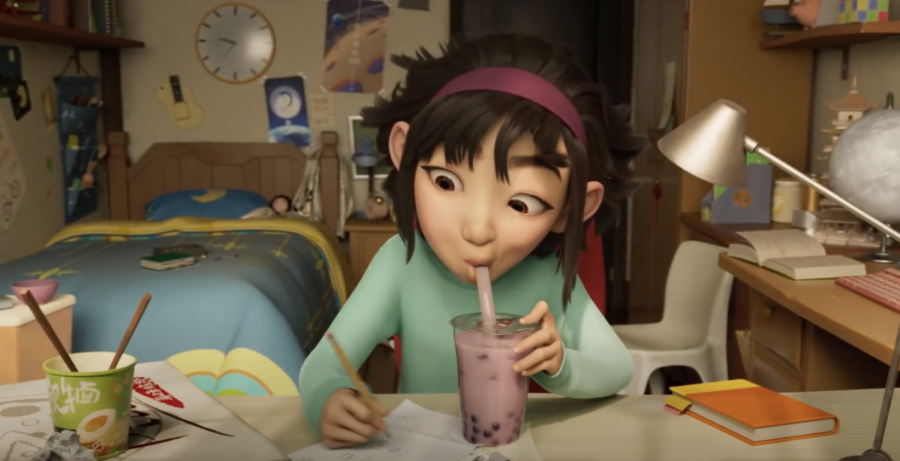 Fei Fei (voiced by Cathy Ang) works day and night on the blueprints for her rocketship to the moon. Photo Courtesy/ Youtube Netflix

Have you ever heard of the lady on the moon, Chang’e? I remember learning about this Chinese legend back in elementary school: Chang’e takes an immortality pill and waits for her one true love up on the moon.

Well, in Netflix’s new animated film “Over the Moon,” 13-year-old Fei Fei (voiced by Cathy Ang) furiously believes in this legend, since it is the one dear relic left of her late mother. It is a beautiful yet heartbreaking story in the beginning of the film as it flashes back to when Fei Fei was a toddler and learns the secret mooncake recipe from her parents. It was like a short film: in the span of one song Fei Fei grew up, her mother got sick and passed away and it’s now four years in the future.

The characters, their anguish, sorrow and loneliness felt real and relatable; that is until Fei Fei built a rocketship to travel to the moon to find Chang’e, hoping to prove that Chang’e is real so her dad won’t marry his new girlfriend, but instead choose to live the rest of his life in memory of her mother. Don’t get me wrong; I loved seeing a female STEM protagonist swooning over magnetic levitation and physics. I felt that on a personal level. The uncertainty and unrelatedness arrived when Fei Fei and her soon-to-be younger stepbrother landed on the moon with the help of two dragons.

Apparently, from Chang’e’s “tears, heartbreaks and sighs,” her sidekick Jade turned the desert moon into a “radiant city of light” –– nothing like Paris though. Instead, it is occupied by colorful talking blobs, mooncakes, chickens and frogs. The moon city, Lunaria, seemed to be a mix between Pixar’s “Inside Out,” a disco and an artist’s palette of colors: bright, shiny and odd. You really don’t expect the immortal human to be living with talking pixels on the moon, hosting concerts of her vain yet catchy solos.

The film’s director Glen Keane, a former Disney animator, definitely gave off Disney-vibes in this film through the typical storyline — a protagonist overcomes hardship while embarking on a solo-adventure to solve the problem — with a really sweet message at the end. Although the idea of Lunaria is overrated, I thought the colorful city of Lunaria was pleasing to the eye and the intricate details in Chang’e’s traditional clothing and Fei Fei’s town back on Earth were stunning. However, it would have made for a more compelling story had the characters’ journey been developed on Earth rather than the moon.

Despite some of the cringeworthy songs and pixelated creatures on the moon, there is still an important message we can take away from this film. Fei Fei was so worried that if her father remarried he would forget her mother and their beautiful love story. However, she comes to realize that moving on does not mean you are forgetting the past and all the good memories it came with. Those will remain in your heart: forever and always.