Notable Novels: Leave the World Behind 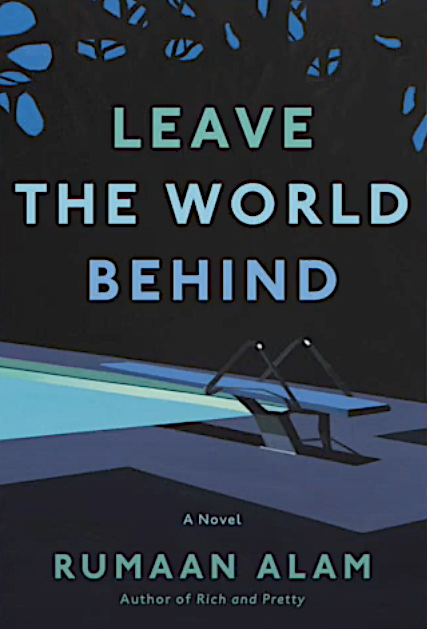 A weekend in the Hamptons at an Airbnb with a pool might sound like an ideal getaway. It sounded perfect to husband and wife Clay and Amanda, who rent a house for a weekend with their teenage children. But a late-night knock on the door sets the idyllic weekend trip on a twisted, dark turn. “Leave the World Behind” by Rumaan Alam is a suspenseful, yet incredibly vague, novel that takes on race, family dynamics and explores what happens when we are disconnected from the world.

White, middle-class Americans Amanda and Clay are jarred when they hear a knock at the door late one night at their rental. On the other side of the door is an older Black couple, G.H. and Ruth, who explain that they are the owners of the house and that there has been a blackout in the city so they decided to come to their Hampton home instead of attempting to get back to their apartment. Amanda is immediately suspicious of these people claiming to be the owners of the house. The blackout, however, seems to be a legitimate story since cell phones and television services are no longer working, something Amanda discovers when she tries to validate the couple’s identity on her phone. A few push notifications from before the internet went out indicate a blackout hitting the East Coast and a hurricane making landfall. Although they still have power, the uncertainty of G.H. and Ruth’s story combined with the loss of phone and TV service doesn’t sit well with Amanda and Clay, who have a sleepless night trying to determine if what G.H. and Ruth said was entirely true.

Themes of race and family are sprinkled throughout the novel. As parents, all four adults recognize the instinct to protect their children at all costs, but now that something unknown is happening and Amanda and Clay’s son suddenly falls ill, they are not sure how to proceed. Amanda and Clay’s prejudices are exposed in their skepticism of the Black couple, not believing that they could own this beautiful home and stereotyping them as potentially dangerous. The discomfort of a Black couple knocking at the door of a white family is thick as molasses, and the house becomes a type of battleground between the couples.

And as for the situation at hand – is there really a blackout? Is it an apocalypse? How safe are they in this house, away from the rest of the world? Alam paints a vague scenario that allows readers to guess for themselves what could be happening. The choices the couples make play out like a movie, similar to a movie scene in which the viewers yell, “Don’t go in there!”

“Leave the World Behind” is a suspenseful, pseudo-dystopian novel that takes readers from a dreamy weekend getaway to a wild nightmare. A movie version is in the works and expected to release on Netflix, with actors Denzel Washington and Julia Roberts already on board.  Readers who prefer a lot of detail and clarity may not enjoy this book, because it leaves a lot open to interpretation and lets readers make their own conclusions. Readers who are okay with ambiguity and allowing their minds to explore the possibilities will likely find this book appealing. Be forewarned, though … this novel lingers in your mind when you’re not reading it and long after you’ve finished it, as you can’t stop thinking about what transpired in its pages.