The world of debs and courts collides with modern scandal 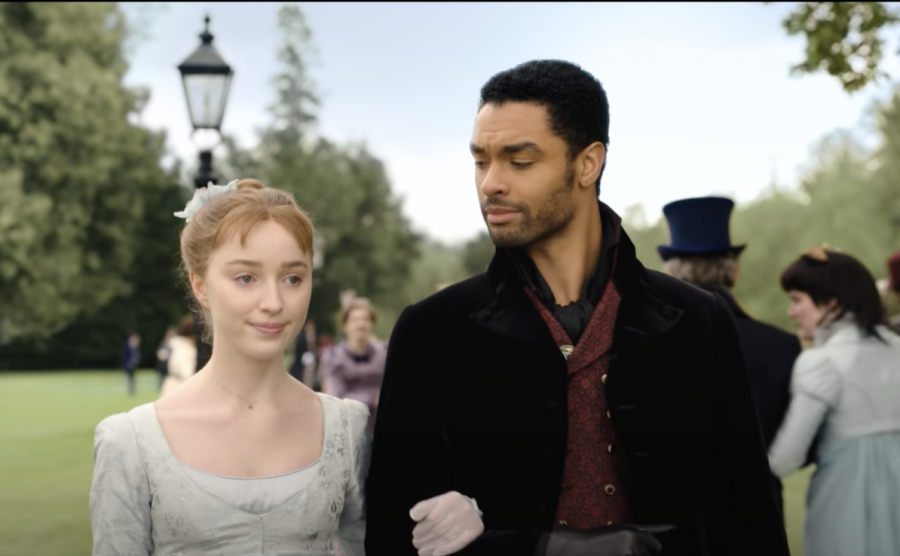 Netflix has taken the lead in creating entertaining, original content. With the slowed pace of the TV and film world due to the pandemic, streaming platforms have become our most up-to-date source of entertainment, in and outside our homes. The large increase in new subscriptions Netflix has received since the beginning of 2020 is not surprising. People spending more time at home  want ‘new’ content to browse and watch and Netflix gives them that option. Just when I thought Netflix  could not top the limited series documentary “Jeffrey Epstein: Filthy Rich,” “Bridgerton” was released on the streaming platform.

Sex, scandal, romance and royality encapsulate the themes of Season 1 of “Bridgerton.” The show was released on Dec. 25, 2020, and  rapidly grew in popularity since its release date. My Instagram and TikTok feeds were full of fan edits, reviews and pleas to watch the show. Whether it was the beautiful Duke of Hastings, played by Regé-Jean Page, courting in the 1800s or the many explicit scenes, viewers seemed to be hooked. I, however, did not jump at the offer. With the random clips from social media, my first impression left me without a desire to binge. During the last week of winter break, searching for a new series was not on the agenda but Netflix’s home page made it easy to click on, as it was the No. 1 ranked Netflix original.

Based on the novel series by Julia Quinn, “Bridgerton” is a period piece set in 1813’s London, England. Daphne, the oldest daughter of the Bridgerton family, has come of age and must begin her first ‘season,’ which is where daughters begin to court for potential husbands. There are three main families to follow: the most esteemed Bridgertons, the scandalous Featheringtons and the small Basset family. These families are also the main subjects of Lady Whistledown’s gossip pamphlets. Think “Gossip Girl” but in the 1800s. Lady Whistledown’s (voiced by Julie Andrews) identity is a secret, but she sees and uncovers the real secrets of these families;some in favor of social praise, while others are able to ruin reputations.

Not only does “Bridgerton”  deserve praise for the storyline’s suspense and unpredictability, but it also is worthy of praise for the technical features as well — the costumes and jewelry are phenomenal and it is obvious that the designers paid  attention to the closest of details, from the corsets to the crowns. The cast is refreshing as well. Most actors in the drama I did not recognize, but I thoroughly enjoyed their work in the show. Lastly, the music. Classical instruments and orchestrated pieces have a contemporary feel. The songs chosen are modern pop songs that have been transposed into classical pieces — songs like “Wildest Dreams” by Taylor Swift, “thank u, next” by Ariana Grande and “bad guy” by Billie Eilish are reimagined with stringed instruments.

While “Bridgerton” does not replace my favorite Netflix now-HBO-Max-owned series, “Gossip Girl,” I have now momentarily forgotten about my frustrations of its departure. “Bridgerton” is suspenseful, funny, romantic and eye-catching. It encapsulates everything the 1800s could have been if modern gossip and the questioning of a women’s “duty” was present during the Regency era of court and debutants. All in all, this series definitely deserves ‘binge-worthy’ status.

Season 1 of Bridgerton can be found on Netflix. It consists of 8 episodes. The series was renewed for a second season on January 21, 2021.