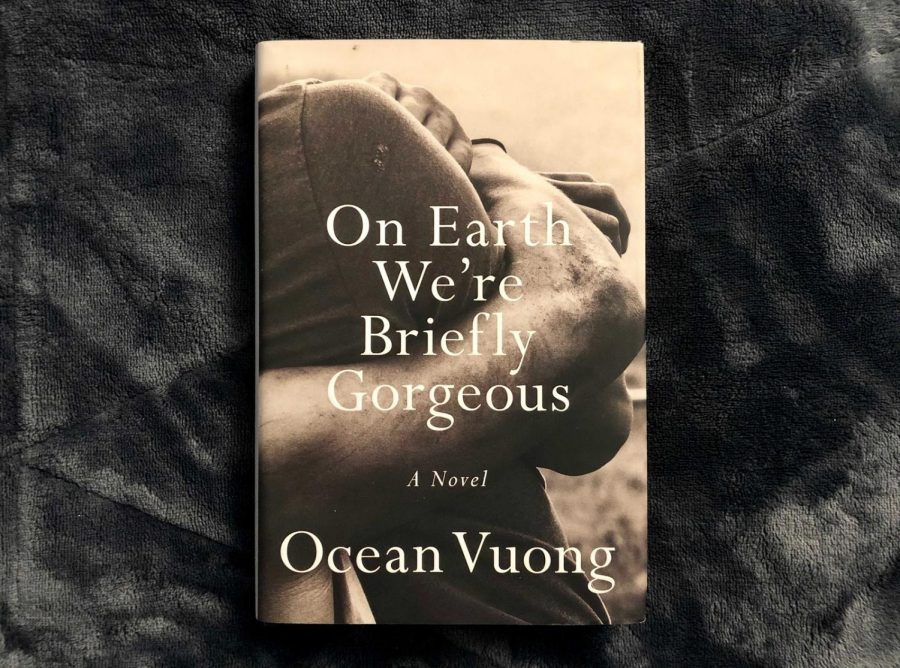 “On Earth We’re Briefly Gorgeous,” the debut novel by poet and author Ocean Vuong is extraordinary, and nothing short of it. It is an epistolary novel based loosely off of Vuong’s own experiences that delves deeply into the process of growing up, being a child of immigrants, LGBTQ+ love and relationships, socioeconomic statuses, cultural divides and more. It’s a story that resonates with many people, especially people of color in America.

Ron Charles sums it up best in his Washington Post review: “Emerging from the most marginalized circumstances, Vuong has produced a lyrical work of self-discovery that’s shockingly intimate and insistently universal.”

The main character, who goes by Little Dog (a nickname given to him by his grandmother), is a Vietnamese-American man living in Connecticut. This book is meant to mirror Vuong’s own life — a collection of his letters to his  illiterate immigrant mother, knowing that she will never read his words. Regardless, he still writes it with the intention to explain his perspective and takeaways from his childhood.

Much of the book focuses on what it means to become American. One of the first chapters recalls a moment when he and his mother were at a grocery store trying to buy oxtail. He was only a boy, not proficient in English, unable to communicate on behalf of his parent. So, desperate for food, his mother began to mimic the sounds and movements of a cow. The butcher laughs and pities them, as a feeling of desolation and helplessness stems from Little Dog — emotions that many immigrants have experienced. Little Dog asks, “What is a country but a borderless sentence, a life?” He later continues with: “What is a country but a life sentence?”

Vuong’s wordplay is what keeps you glued to the book. You’re often left wondering how you could intertwine such levels of passion and wit in just a few mere sentences. When Little Dog is in college and his childhood friend (and lover) dies from an overdose, Vuong writes: “I’m broken in two,” and later, “Now I’m broken into.” Another example, when he writes about the hardships of life: “It’s not fair that the word laughter is trapped inside slaughter.”

I actually started the book back in August of 2020, but I was so enamored by Vuong’s poetry-like prose with beautiful diction and recurring metaphors and emblems (such as the migrating monarch butterflies) that I decided to wait until winter break to finish it. It was a good call because Vuong’s metaphors continued to unravel until the very end of the book. I was able to linger on every sentence and reread paragraphs that left such a strong impression on me that I couldn’t help but begin to write my own set of reflections in a similar writing style.

Vuong’s prose shares the same strengths as his poetry, which earned him the T.S. Eliot Award in 2017 for his work “Night Sky with Exit Wounds.” His exceptional use of elision, juxtaposition, and sequencing together acts like a collage. Passages are bombarded with repetition and recurring phrases which only build momentum, much like his poetry.

Although “On Earth We’re Briefly Gorgeous” is non-chronological, Vuong’s word choice and continuous remarks about the nature of predator and prey, the intersection of war, victimization and his existence, and his growing capability as a writer versus his mother’s loosening grip on communication, give the book a smooth flow that helps us see the bigger picture, just as Little Dog is able to reflect on his childhood as an adult. Vuong may be one of the best writers of our generation, and to not read this highly acclaimed book would be to do yourself a huge disservice.