A breath of fresh air for the DC Cinematic Universe 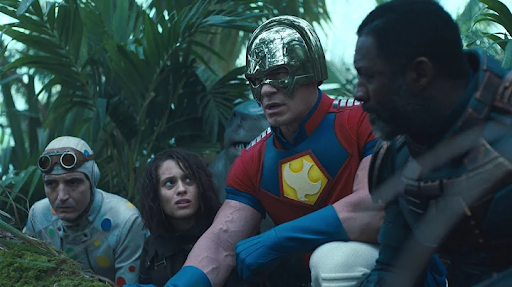 Following a summer of failed attempts to revive the entertainment industry during the catastrophic COVID-19 pandemic, James Gunn directs a reimagined, joyful, action-filled and Tarantino-like half-sequel half-reboot of the 2016 movie “Suicide Squad.”

Starring A-List celebrities such as Margot Robbie, Viola Davis, Idris Elba and John Cena, “The Suicide Squad” brings back the controversial characters of Harley Quinn and Amanda Waller, and introduces new supervillains to the squad like Peacemaker, Ratcatcher 2 and Bloodsport.

Although the first “Suicide Squad,” directed by David Ayer, is heavily criticized by comic fans, Gunn, the popular “Guardians of the Galaxy” director, undoubtedly resuscitates the excitement of this group of criminals and beautifully captures the essence of the squad. The film is simply gory, humorous and chaotic.

Despite Gunn’s magnificent work in this franchise, his involvement in this film was heavily discussed by fans due to his previous controversies. In 2018, a series of tweets and other media were unearthed that revealed Gunn explicitly talking about subjects such as rape and pedophelia. His tweets led him to be fired from the “Guardians of the Galaxy” projects, which he had previously directed.

With so many characters and plot lines involved, it is extremely easy to get lost in a film of this nature. However, unlike Ayer’s 2016 film, which arguably places a heavier focus on Harley Quinn, Gunn exceptionally gives each character enough screen time and background that allows the viewers to humanize these felons and form emotional connections with them.

While Robbie, Elba and Davis were outstanding, as usual, Portuguese actress Daniela Melchior steals the show by delivering a youthful and poignant introduction to Ratcatcher 2. The phenomenal chemistry by the entire ensemble and their sense of family, despite the dangerous circumstances they are put through, makes the film even more enjoyable.

Every once in a while, after a series of poorly executed movies, we get an amazing film from the DC Universe — “The Suicide Squad” is said film. It is a breath of fresh air for the DC Comics cinematic franchise. With spectacular actors, a superb director and eye-catching visuals, “The Suicide Squad” is easily one of the best movies from the DC Comics universe. Hopefully Gunn becomes a regular in this franchise, despite the controversy around his name, so he can finally save this world of superheroes and villains.