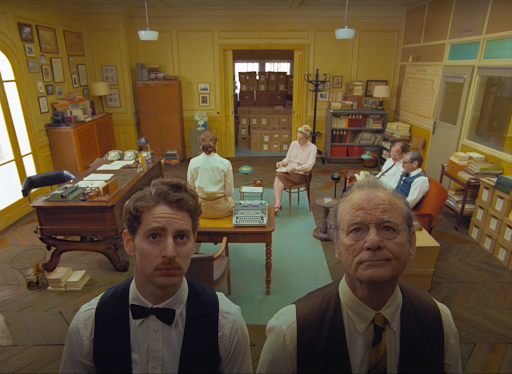 With a limited release this past week before reaching all theaters on Friday, Wes Anderson’s highly anticipated project “The French Dispatch” is finally here. Boasting a star studded cast that includes Bill Murray, Tilda Swinton, and Timothée Chalamet among others, it tells each story being published in the final edition of the titular French newspaper. Anderson’s first live action film since 2014’s “The Grand Budapest Hotel,” this uniquely formatted feature is sure to win the hearts of audiences worldwide with its raunchy humor and gorgeous aesthetic.

Though this cast consists of several high profile names that combine for an endless number of Oscar nominations, one should not go see “The French Dispatch” specifically for their favorite actor or actress. Much of the cast’s screen time is very evenly distributed, which I predict will damage some individual hopes for this upcoming award season. Nonetheless, this is intentional as the film moves in and out of its frame narrative. Even without dominant lead roles, Timothée Chalamet and Jeffrey Wright stand out the most. Some critics thus far have described the cast as overstuffed, which I strongly disagree with, as that sounds like more of a problem for the film’s payroll than for the audience.

From the opening frame, one can easily tell it is a Wes Anderson project. The acclaimed director strikes yet again with a colorful palette that compliments many of the black and white shots found throughout. Interestingly enough, I was able to find many similarities between the cinematography of “The French Dispatch” and Anderson’s animated projects “Fantastic Mr. Fox” and “Isle of Dogs.” With this being said, the film very much has the feel of a love letter to the director’s previous works. However, that is not to say it is not unique; on the contrary, the film’s structure is unlike many others. Picture this: you flip through a newspaper, where each headlining story represents a different area of interest. That is “The French Dispatch.”

So if you are a prior fan of Wes Anderson’s work, you are sure to enjoy this new film. Loaded with hilarious jokes and its own unique flavor, it is not so much about finding a segment you like, rather about picking which one is your favorite. Be sure to see “The French Dispatch” before award season rolls around, and as always, appréciez le film!

“The French Dispatch” is now playing in select theaters and will release nationwide on October 29th. If you are looking to find some of Wes Anderson’s prior projects via streaming, “Moonrise Kingdom” is available on HBO Max while “Fantastic Mr. Fox” and “Isle of Dogs” are available on Disney+.