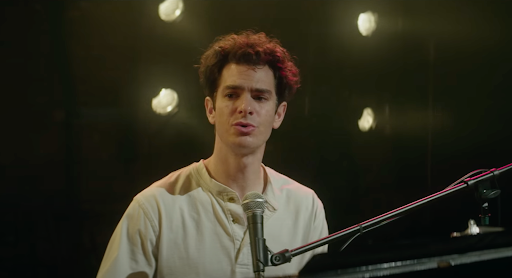 When film companies turn to the theater industry, they typically roll out some adaptation that, in most cases, ends up performing poorly—see 2019’s “Cats.” This is often due to a heavy reliance on musical numbers or a failure to translate the plot to film. However, in his directorial debut, Lin-Manuel Miranda turns the tide on this narrative and delivers one of the year’s best films.

The “Hamilton” frontman shows the creative process and all of its struggles in this adaptation of “Tick, Tick… Boom!,” a musical exposing the harsh reality for those like Jonathan Larson, a playwright seeking to jumpstart his career.

Andrew Garfield stars as Larson, who goes on to write “Rent” after the events of the film. With a Tony Award under his belt from 2018’s “Angels in America,” Garfield is no stranger to the Broadway that inspires much of the film. However, in this frame story, he turns in one of the greatest performances of his career.

Larson feels the excruciating weight of his own expectations upon him, struggling to balance his personal relationships and the musical he is working desperately to finish. Garfield portrays such desperation and fixation even in simple dialogue, convincing himself that his approaching 30th birthday will mark the end of his opportunity.

While this dilemma rages on internally, Larson’s role as the narrator allows for the viewer to better understand his obsession with accomplishment. Garfield delivers strong emotions throughout several scenes, so convincingly that the musical feels like a tragedy, even with its upbeat musical numbers throughout.

A surprise standout in “Tick, Tick… Boom!” is Robin de Jesús, who plays Larson’s best friend Michael. As his character provides a contrast from Larson’s circumstances, it also creates a commentary on the struggle between following your dreams and giving up. De Jesús and Garfield also perform a powerful number titled “Why,” making for one of the most emotional, memorable scenes in the story.

While the musical lays out much of the film’s source material for Miranda to execute, his impact on the final product cannot be understated. He removes the glamorous mask of Broadway to showcase what life is like for artists on the ground floor, something he himself can attest to.

With Larson passing away in 1996, the autobiographical nature of the original “Tick, Tick… Boom!” has since raised obstacles for those looking to reenact it. Nevertheless, Miranda and Garfield do wonders to commemorate the playwright’s work and its everlasting effect on the industry.

“Tick, Tick… Boom!” is now available to stream on Netflix. If you are interested in more of Larson’s work, the 2005 film adaptation of “Rent” can be found on HBO Max.