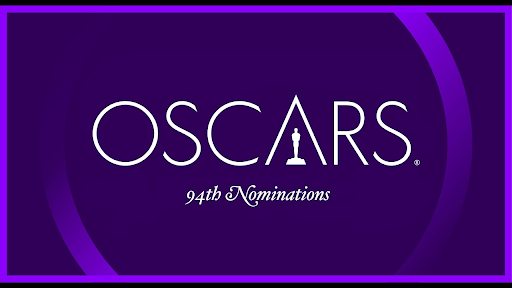 The 94th Oscars nominations have been released and looks to be one of the most competitive Oscar races in recent memory. There is no runaway favorite in any category, but there were a few particular performances that truly stood out to me.

For the past few months, I have strongly maintained my stance that Kristen Stewart should win the Oscar for Best Actress. As I iterate in my review of “Spencer,” her portrayal of Princess Diana is a true visualization of the character’s inner torment and conveys so much emotion to the audience without needing to say a word. However, as Stewart did not win the Golden Globe nor the SAG Award, look to Nicole Kidman and Jessica Chastain (the respectful winners of those other major awards) as strong contenders as well.

Though Will Smith has won both the Golden Globe and SAG Award thus far for his role in “King Richard,” this does not mean there is a wide gap between him and his competition. Andrew Garfield was incredible in “Tick, Tick… Boom!,” a role that not only demanded emotional range, but also musical capabilities as well. Though I would personally vote for Garfield in this category, all signs point to Smith being the favorite here.

Nearly any film in the Best Picture category has a strong case to win at this year’s ceremony. However, I think the most interesting argument is that of “West Side Story.” Sure, it is both a film remake and a Broadway adaptation, but Steven Spielberg (my choice for Best Director) has created a visual masterpiece while taking creative liberties to make this version truly unique. When considering all factors across casting, production, design, cinematography and many more, “West Side Story” is the Best Picture.

Though it did not receive as many nominations as one may have expected, keep an eye on “Dune” as a favorite in many of the technical categories. It was a visual masterpiece that audiences and critics alike truly enjoyed.

At the end of the day, I expect “West Side Story” to finish with the most Oscars won by any film this year. However, with COVID-19 affecting the timing of these film releases as well as the award shows themselves, do not be surprised if there are many surprises at the 2022 Oscars.

The 2022 Oscar Season is full of breathtaking films that encapsulate what “movie magic” is. I have spent a lot of time watching many of the nominated films and performances and many have stood out to me.

I agree with my colleague Connor in many ways, especially his stance on Kristen Stewart’s “Spencer.” I believe that she will take home the Best Actress Oscar for her haunting performance as the late Princess Diana. When I saw the movie in theaters, I immediately knew the power and strength of her performance.

When it comes to the Best Actor title, I believe it will be a tight race between  Will Smith in “King Richard” and Andrew Garfield’s performance in “Tick, Tick… Boom!” The two have proved they are the frontrunners, both having won Golden Globe Awards for their performances. I personally am rooting for Garfield because I am a big fan, but I think the two deserve the top prize.

The Best Picture category is certainly the most competitive race filled with many spectacular films. I think that Jane Campion’s (my pick for Best Director) “The Power of the Dog” starring Benedict Cumberbatch, Jesse Plemons and Kirsten Dunst (all nominated for awards) will take the top prize. The film is nominated for seven awards and I believe it will win many of them. The story left me amazed and deserves all its praise. My personal favorite of the bunch was Sian Heder’s “CODA” about a hearing child of deaf parents. That movie left me in tears and it is extremely underrated in the race.

I am very excited to see what will unfold at this year’s Oscars, and may the best film and performances win!