A King Dethroned: Examining the Will Smith Incident 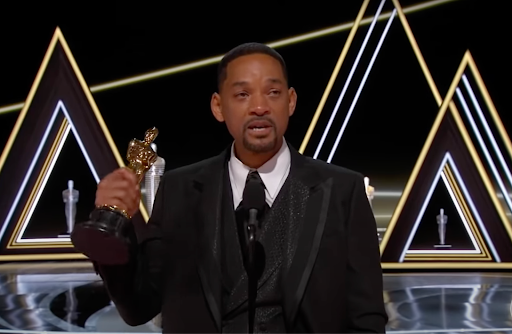 The Academy Awards: it is the true crown jewel of the motion picture industry. Any actor or filmmaker dreams of the day they can walk on stage in Hollywood’s Dolby Theatre, immersed in their peers’ applause while accepting cinema’s highest honor.

That aura was not present late Sunday evening. Instead, viewers worldwide held their breath as Will Smith approached the stage to accept the Oscar for Best Actor, the first of his storied career. Just minutes prior, the “King Richard” star had walked on stage and slapped Chris Rock for joking about Smith’s wife, Jada Pinkett Smith. Will then berated the comedian from his seat for speaking about his partner of 25 years, stunning the audience as they realized it was a serious confrontation.

While circulating clips paint most of the picture regarding the event on a surface level, the surrounding context and immediate aftermath prove to be the best resources in analyzing this incident. Rock had joked about Pinkett Smith’s shaved haircut, stating that he could not wait to see her in “G.I. Jane 2.” Pinkett Smith suffers from an autoimmune disorder called alopecia, which causes hair loss and ultimately forced the actress to shave her head.

Did Rock know about Pinkett Smith’s condition? It is hard to say, but according to the Wall Street Journal, he did not tell the joke during rehearsals and it was not on the teleprompter. He may have known it would not get approved, opting to save it for the live show instead.

Alternatively, being a talented entertainer himself, Rock could have thought of the joke in the moment. With many attendees clearly drinking throughout the night, it is plausible that Rock’s statements were not premeditated. However, he did tell a crude joke about Pinkett Smith at the 2016 Oscars as well, furthering theories that relations between the comedian and the Smith family were previously damaged.

Regardless of what encouraged Rock’s actions, Smith’s response is what will ultimately be remembered from the 2022 ceremony. It was extremely out of character for him, but the true shock came in that Smith initially laughed at the joke. The broadcast showed him smiling next to a displeased Pinkett Smith, cut to Rock and then depicted Smith marching on stage all within a 10-second span.

With what is publicly known about Smith and Pinkett Smith’s relationship, it is especially surprising to see Smith act out in this manner. This makes it difficult to place his motive, especially as he shifted from amusement to anger (enough to assault someone) so quickly. Did Pinkett Smith pressure him into acting? What does he owe to her, especially as she publicly admitted to cheating on him in a 2020 “Red Table Talk” video? It is extremely hard to believe his immediate reaction was to act the way he did. As a fan of Smith’s work, I do not want to.

The actor’s Oscar acceptance speech carried additional weight following the events that had transpired. Fighting back tears, Smith said, “In this time in my life, in this moment, I am overwhelmed by what God is calling on me to do and be in this world.” This man is struggling to do right by his family, one that has seen its fair share of internal drama over the years. Though I cannot condone his actions, I sympathize with him and the stress he must be under.

But without the context of Smith’s speech, I can understand why people have such strong emotions about this incident. To act that way on national television is deplorable, but I think Smith would agree. Additionally, several co-stars have since spoken out to attest to his usual kind nature. I think he is a good person who made an emotionally charged mistake in the moment.

While we may not get direct answers from the Smith family — or Rock — on what transpired, I do not think the first-time Oscar winner deserves to have the award revoked. A ban from next year’s ceremony seems like a sufficient punishment should the Academy opt to punish Smith following their investigation.

However, it will never be that simple for the actor. There will be people who choose to define Smith based on that 20-second video. I do not think that is fair, but it is the harsh reality. Sunday night’s headlines will follow him forever, especially if this is the only Oscar he ever wins.

In the time that has passed since the incident, Smith has resigned from the Academy and released a formal apology. He described his own actions as “shocking, painful, and inexcusable” in a statement to Variety, among other news outlets, echoing the words of many who witnessed them.

While the Academy’s president, David Rubin, publicly accepted the apology, the famed organization will move forward with its disciplinary proceedings. A decision is expected to be reached following their board of governors meeting on April 18.

However, in resigning, Smith has taken a proactive, sincere approach to accepting the board’s decision. Prior to the star’s resignation, being stripped of such membership was widely considered to be one of the Academy’s most severe options for punishment. Though Smith can still receive nominations and awards from the Academy, this removes him from a prestigious group of over 10,000 industry professionals, all of whom are granted voting privileges for the Oscars.

Only time will tell what happens to the actor, as there is no true precedent for such proceedings. It is important to note that Harvey Weinstein and Bill Cosby, in the wake of their heinous allegations, got to keep their Oscars after being expelled from the Academy. Unless this institution truly fears a negative impact on its public image, do not expect Smith to face much additional punishment.

It is clear that Smith has taken so much pride in portraying Richard Williams and telling his story in “King Richard.” I just hope that the film’s message and magnitude are not lost in the wake of this stunning event.