“Where The Crawdads Sing:” From Book Pages To Film Screens

While the book is mysterious, romantic and action packed, did the film reach fans’ expectations? 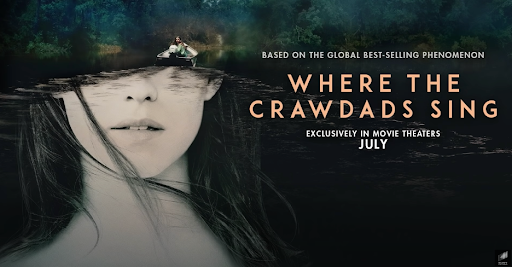 The film adaptation of “Where the Crawdads Sing,” Delia Owens’ New York Times best-selling novel was released on July 15. The film was both beautiful and heartbreaking, and a fascinating adaptation of the book.  In this day and age, I rarely see movies with such a deep storyline. Special effects and car chases are a fun cinematic experience. However, this story demonstrates that less is more by showcasing beauty in simplicity. As well as all the numerous feelings and emotions humans experience and how those feelings lead to different actions — and to different roads in life.

“Where the Crawdads Sing” projects different love perspectives: the love of family, a friendship that evolves into a love affair, the love of a stranger and the love of oneself. The story creates what we have known as heroes and villains, a good guy and a bad boy fighting for the same gentle girl.

The main character, a young girl named Kya is up against her biggest fight, her story takes a turn when she is blamed for the murder of Chase Andrews and sent to prison without any proof she committed the crime. Her world will give viewers hope, but then take it away once the film unravels the million-dollar question of who committed the crime.

Crime, thriller, mystery and romance are just some of the genres featured in this film. One look at this movie made me cry, smile, laugh or frown since it mimics the tale of an abandoned child left to fend for herself, with the marsh as her only ally and strangers’ voices who only showed her rejection, hatred, and disapproval.

The suspense of a crime will keep eyes glued to the screen. In simpler words, it is just an excellent film adaptation.

Director Olivia Newman portrayed the book’s essence by staying true to the storyline, characters and emotions of the story. This film captures the gentleness, strength and softness of the story, and thus is an authentic adaptation of Delia Owens’s novel.

Many have been captivated by this story, and one includes none other than Taylor Swift. The singer-songwriter wrote an original song, “Carolina,” about Kya’s life and legacy. “I wanted to create something haunting and ethereal to match this mesmerizing story,” Swift described in an Instagram post.

“Where the Crawdads Sing” represents the strength of a woman, a brave outsider who never backed down, regardless of the lies, the broken promises, the shattered memories, and the burdens left as a souvenir from her past. She lived on a treacherous road, but she always kept her head high and knew her worth even when no one else saw it.

At the end of the day, people who watch the film will find that on some occasions, or many times throughout one’s life, they will be alone. Kya only had herself, her heart, her mind, and her strength — and she was content. People can search the deepest sea or the driest desert, but they may not always find someone to lean on.  Viewers discover they have two of their own shoulders to cry on, and they are enough. If audiences can learn something from Kya, it’s to know their worth and keep their eyes open; predators are out there.