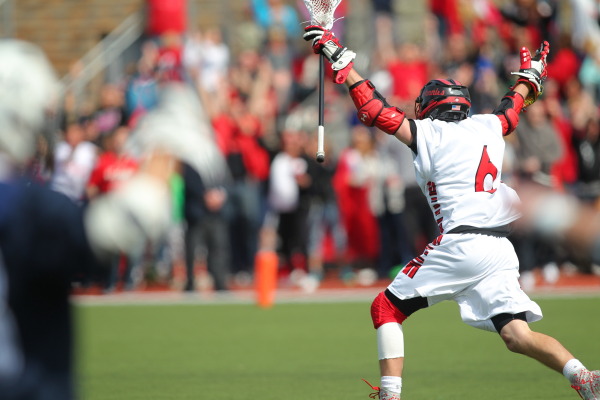 Kieran McArdle celebrates a game-winning goal against Villanova in 2014

If you take a quick glance through the St. John’s lacrosse record book, there’s one ubiquitous name.

Kieran McArdle’s name is inked on nearly every St. John’s offensive record. In his four seasons in Queens, he amassed 264 points (the total number of goals and assists). The next closest player registered 219.

“The coaching staff really just showed a lot of interest in me,” McArdle said of his choice to attend St. John’s in a recent phone interview with the Torch. “I wasn’t that high of a recruit until my senior year.”

McArdle came to Queens without garnering a ton of attention before putting St. John’s lacrosse on the map with the help of his teammates. He flew under the radar until his senior season at Connetquot High School on Long Island. McArdle came out of nowhere to finish second in all of Suffolk County with 112 points in 2010.

He remained one of college lacrosse’s best kept secrets until his sophomore season when he broke out with a three goal, four assist performance against Notre Dame.

The program’s last winning season came in 2013, McArdle’s junior season when the Red Storm went 9-4 and registered a win over top-ranked Notre Dame for the second straight season. Later that season, he was named a USILA All-American, the first time in school history.

After a 7-7 record in McArdle’s senior season, the program was put into a state of rebuilding.

“My senior class had a ton of success, and it’s tough to rebuild right away,” he said.

Between McArdle and his teammate Kevin Cernuto, the program suddenly had to replace two players that combined for 235 goals and 194 assists in their four years on the field.

The rebuild that the program’s been undergoing for the past two or three seasons has finally turned a corner in 2018. St. John’s lacrosse beat No.18/19 Hofstra at home, and has a shot to finish the season with a .500 record for the first time since McArdle’s senior year. The team currently sits with a 6-7 record with one game left to play on Saturday against Georgetown.

But for McArdle, his success at St. John’s carried over to Major League Lacrosse when he was drafted fifth overall in 2015. He led all rookies with 49 points in his rookie campaign, good enough for him to be named MLL Rookie of the Year.

Since October of 2016, McArdle has expanded into indoor lacrosse, when he was signed to the Toronto Rock of the National Lacrosse League as an unrestricted free agent.

During the MLL season, which lasts from mid-April to August,  McArdle will travel on the weekend to play games.

He hasn’t been able to attend many games since he graduated from St. John’s in 2014, but McArdle is excited about where the program is right now.

“Every day we competed, it didn’t matter if it was fall ball or the spring,” McArdle says of the type of culture that the team had when he was a player. “It starts with hard work, but it doesn’t necessarily have to be on the field.”

He was on hand to watch St. John’s play at Stony Brook in a tough 8-6 loss on April 3. Through the rain-obstructed vision, McArdle saw that culture in the St. John’s players.

Senior attackman Jason DeBenedictis has been a crucial part of the rebuild for reasons that have nothing to do with how many goals he scores or how many assists he throws out.

“Anytime you have a leader like that, he’s spread his game out to be more of a dodger and a passer,” McArdle said of DeBenedictis.

Despite being years removed from the program, McArdle says he still talks with Coach Miller and the staff once a week to talk about how their respective seasons are going.

However, this is the first season for McArdle where no players on the Red Storm’s roster are former teammates of his. He’s done lacrosse camps with the Madsen brothers and speaks sometimes with sophomore Matt Oehl. Both Oehl and McArdle graduated from Connetquot High School.

He believes that more players on Long Island should consider St. John’s as a place where they can flourish. There is an almost universally considered belief that Long Island is the hotbed for lacrosse. Seventeen players on the 2018 St. John’s lacrosse roster alone are Long Island natives.

“I think that some kids will go to some schools, not get playing time and then end up kicking themselves when they didn’t pick a school like St. John’s.”