Freshmen come from near and far 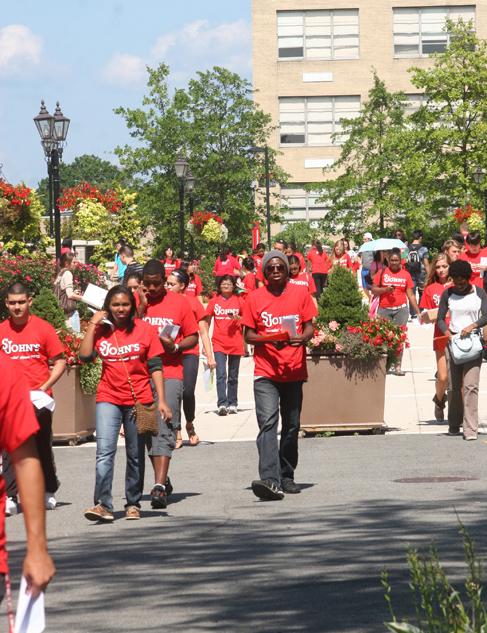 Walking down the strip towards the softball field, you may get the opportunity to meet an artist whose mural is displayed at the Museum of Modern Art (MoMA) or an architectural intern from Karachi, Pakistan. You may meet an employee of NASA’s Space Camp or a committee board member for social justice in El Salvador.

These examples provided by the University are just four of the nearly 3,000 new students that will be roaming the three St. John’s NYC campuses this year.

Net deposits (the amount of students who have made their initial tuition payment) have increased by five percent this year, according to Bryan Gross, Associate Vice President of Enrollment Management. This growth is due to a the slight increase in students from St. John’s “primary market” of the five boroughs and Nassau County and a three percent increase in students from the “secondary market” – the rest of the world. In the past two years, St. John’s has seen deposits rise by more than 100 students from outside of the primary market, he said.

Gross said that this increase is a direct result of greater outreach to large population states such as Texas, California and Florida. In addition to the greater national efforts, St. John’s has also been focused on increasing its diversity with international students. Recently there has been a University presence in South America, China, India, Korea and many different Caribbean countries.

Take for example, Luis Gustavo Coutinho de Rego, Bruno Augusto Constantino and Luciano de Azevedo Telesca Mota, three Brazilian transfer students majoring in computer science. They were each contacted by St. John’s after receiving one of the 150,000 Brazil Science without Borders awards given out this year.

This increased outreach to the secondary market does not take away from St. John’s responsibility to the primary market.

“St. John’s is still very much focused on the primary market and the Catholic community,” Gross said.

They have established a new Catholic Leader Scholars Program this year, in addition to the preexisting Catholic School Scholarships and Catholic Student Scholarships offered to eligible incoming freshmen. They also have the Hugh L. Carey Community Scholarship Award which is awarded to “full-time and first-time students” commuting from the five boroughs.

St. John’s has done much to not stray from its original goals and values, making education available to all. According to Gross, there is a focus on providing “very high need” students opportunities for higher education. Advantage Academy is a University and NYC Department of Homeless Services program that provides free education for eligible homeless and previously homeless students to receive their Associate’s degree. Advantage Academy began in the fall of 2009 and has been running ever since. Gross pointed out that St. John’s focuses not only on increasing racial, geographical and religious diversity, but also on economic and situational diversity.

The University, once focused on providing higher education to its immediate community, boasts that it has now transformed itself into a home for everyone, near or far. With students from as far as China and as close as across Union Turnpike, St. John’s has begun providing for its students a level of diversity indicative of the Queens community surrounding it.