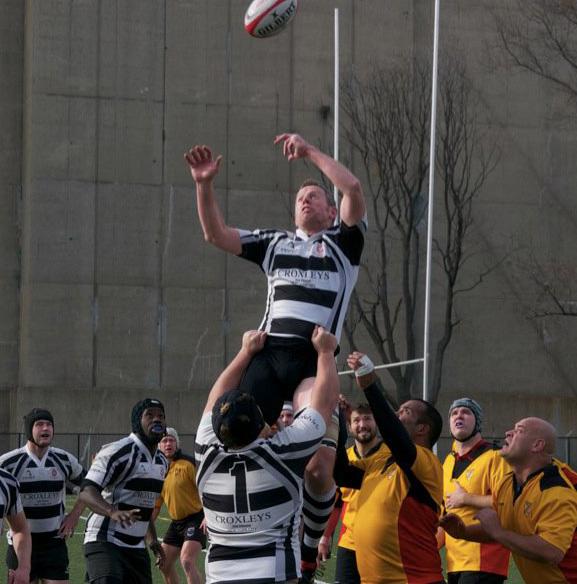 In college life, the world of sports is just as big, if not bigger, than the academic life on campus. From intramural flag football to NFL games being screened every weekend and our very own Red Storm athletic teams, it’s impossible to escape the world of sports.

One sport that you might not see at St. John’s though, is the game of rugby. However, back in the 1970’s the sport was extremely popular on campus, according to Alan Whelan, the founder of an undergraduate rugby club during his time as a St. John’s student.

“During my time at SJU, the interest was phenomenal,” he said. “We were the largest club on campus.”

The club eventually grew into what is now the Village Lions, playing in the first division of the NY Met Rugby Union.

“The Lions are without doubt the greatest social rugby club in NYC,” he said. “They draw players from rugby playing colleges across the country and from all over the world.”

Whelan told the Torch that although the club was popular among the students on campus, the administration was not fond of the sport.

“SJU never gave us any assistance in recruiting new members period,” he said, except for the $2,500 the club received from the school, which he said went to coaching, referee fees and registration dues.

During the time that the Lions played on campus, the group, according to Whelan, was largely self-sustaining, paying for their own travel expenses through the efforts of a band that traveled with them called The Rocks.

“We paid for all our own travel expenses from revenues earned from the band,” he said. “The rugby club got a dollar per person for every student who showed up at the gigs with an SJU student ID card. We often made three and four hundred bucks on a gig.”

The Lions became so prominent that they drew the attention of several clubs in Europe.

“Because we were great hosts and the dominant college side on the East Coast, we were offered fixtures against every European college side that came through NY.”

Whelan said the Lions played European teams such as Manchester U, Nottingham U and Paris U and accused the administration of not welcoming the touring sides to campus.

“Not a single member of the SJU administration ever came down and personally welcomed any of the dignitaries that traveled with these touring sides.”
Whelan said that in 1985, the administration at the time made the choice to ban the group from the University.

“They accused the rugby club of ‘Over Indulgence,’” he said.

The Village Lions became the first college club to make it to the aforementioned NY Met Rugby Union, when they outgrew their own league.

“In 1975 I asked the NY Met Rugby Union to allow us to leave the college division and join the Men’s senior division because we could find no worthy opposition among the colleges in our league,” he said.

The Lions found immense success in the league, winning Divisions Two and Three and they made it to the first division in 1979.

Currently, the Lions field three men’s teams and two women’s team each week in the first division on their home pitch in Randall’s Island and travel up and down the east coast and often tour overseas.

Senior Mark Eberle, a fan of the sport of rugby, said he wished he knew of the presence of an alumni rugby club, saying that it could help promote interest in the sport and bring people together.

“It’s not a super-popular sport so it’d be really cool if we could get together and talk to guys, watch some games, and play a little bit,” he said. “It doesn’t even have to be super competitive, just enough to grow the sport.”

Whelan also said that he wanted those interested in rugby to know that the Lions have never forgotten their alma mater, despite the rough relations with the administration in the past.

“I don’t want our present undergraduates to feel we have abandoned them,” he said. “We welcome them with open arms and will run rugby practice for them at Cunningham Park, close to the campus so they can learn the game and enjoy playing during their precious college years.”

The Lions will host their Friends and Family Homecoming game on Oct. 20. Whelan extended the invitation to the game to all current undergraduates.
Whelan can be contacted for more information at [email protected] or you can visit villagelions.org.