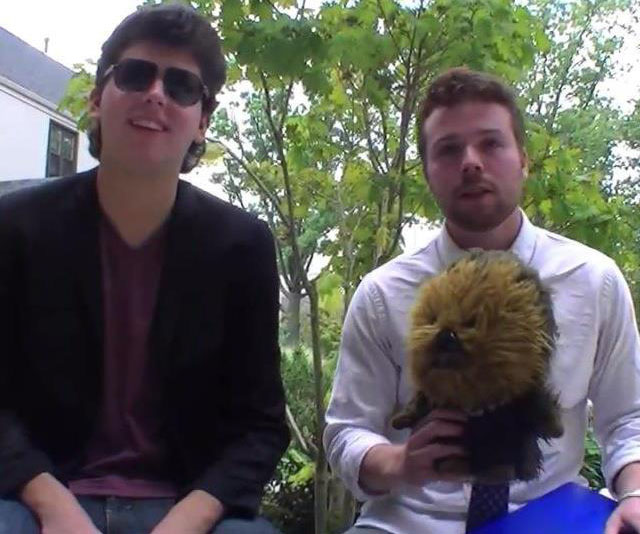 There are many things that are synonymous with the autumn season at St. John’s.  Among them are cooler temperatures, a new college basketball season and the return of the intramural flag football league. For one of the teams in the league, it isn’t enough just to win; they want to record it for posterity.

The #Dieslow football team has commissioned its own “Hard Knocks” style series to document the team’s run in its Sunday night league, where it currently sits in first place.  The idea was first hatched when members of the team, including quarterback Jason Lapin, spent time studying in Europe.

“We started talking about [flag football] while we were abroad,” Lapin said. “I felt like kind of a jerk because I was taking it so seriously and I was like, ‘The only way to make it funny would be for us to make a show about it instead of being that way too serious guy.”

“We want to make the viewer laugh,” Inman said. “The goal is to get people to keep watching these videos. We’re 5-1 and we don’t have too many fans.”
In the first episode, the players go around campus and the community asking people about what they think of the team, which they dub “New York’s football team.”  The responses vary from the mundane, “Who’s that?” to the ridiculous, including Lapin hyping up the team at a local Modell’s Sporting Goods store.

“I think they thought it wasn’t going to be funny,” Lapin said referring to his teammates’ incredulousness. “I don’t think they trusted how funny I am, but we pulled it off.”

“They thought it would be more of a documentary, not like the funny video it turned out to be,” Inman added.

As episodes two and three are being produced, the attention turns to field, where according to players, is holding onto the number one seed with its 5-1 record.
Their ultimate goal is to win the league, which results in a trip to Maryland for the regional championship.  With that comes more time for footage for a show that is trying to keep the laughs coming.

“During the week we can think of stupid stuff we can say,” Lapin said. “Basically no one knows about it, so if you just take a camera and ask them questions like they know, it’s hilarious because they’re like ‘Uhh what the hell?”

While the majority of it is meant to be humorous, Inman plays his part as the cliché spewing coach, including a segment of the show known as “Coach to Player,” where he takes a different player under his wing every week.

“We have the segment that features player pep talks,” Inman said. “It’s a great look inside what goes on between team members besides the action on the field and the jokes.”

Things get more personal than most people might expect with a college-aged intramural team.  Lapin said he is driven, in part, by his childhood desire to participate in the Little League World Series that never came to fruition.

“I think it’s incredible that at 20 years old, on a stupid flag football team, we have an opportunity to go somewhere and play football with a bunch of random people we’ve never met in our lives and just experience that dream of mine in a different sense,” Lapin said, referring to the Maryland aspirations.

The final goal for the series is to have 10 episodes available online, including what they hope to be that run to Maryland.  Meanwhile, #Dieslow’s plans for the future remain unclear.  While the team is only organized for flag football, the players are open to the possibility of expanding to the soccer league.  There is no word if softball has been discussed as well.

The series can be found on Youtube by searching “Hard Knocks #Dieslow.”

Inman added, “We’re just trying to win, have a ton of fun and create some laughs along the way.”