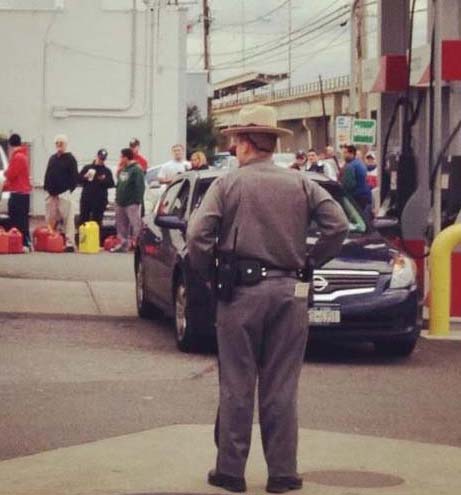 For Rob Delsignore, a junior commuter student, returning to school on Nov. 5 was no easy task. In order to make his way to campus, he had to leave behind his normal mode of car transportation for a crowded LIRR train. Without easily accessible gasoline, his car was useless and unfortunately for him, public transportation wasn’t much better.

“It was different, I’ve never had to take the train [to school] before,” Delsignore said. “I had to take the LIRR to the Peter Pan bus. It was complicated, but thankfully, now I’m driving again.”

Superstorm Sandy left a region typically reliant on gasoline crippled in its wake. During the storm, the port in New York  was closed for the safety of ship crews and as a result, all oil deliveries ceased. Coupled with a lack of power at most gas stations, long lines formed at the few stations functioning.

“I was lucky,” junior Jon Perez said. “I used my dad’s van to get to school. Eventually I had to get gas for my car, which meant getting up at 4:45 the morning of Election Day and waiting six hours for gas.”

Shortly after the storm, New Jersey Gov. Christie signed an executive order to help ration the amount of gas. The order permitted people to purchase gasoline depending on the numbers on their license plate. Residents with a license plate ending in an odd number or letter could fill up on odd days, while those with an even number would be limited to even days.

“As New Jerseyans continue the long process of recovering from Hurricane Sandy, it’s imperative that our families have secure, reliable access to essential supplies like fuel,” Christie said in a statement.

“Only 25 percent of gas stations are open,” Bloomberg said “Drivers are still facing long lines. Frustrations are only growing. The best way to help customers buy gas faster is to alternate the days that drivers can purchase gas.”

While the restrictions have been implemented in New York City and Long Island for six days, the lines have not dissipated.

“I’m able to get to school now with the little gas I have,” Delsignore said. “But I don’t know how long this will last and if it’s too much longer, I may find myself back on the train.”