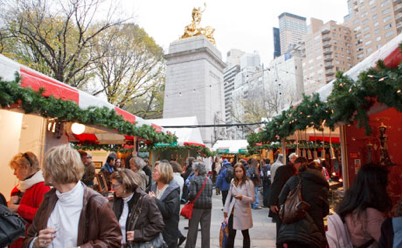 Santa needs help this holiday season and there are only a few places to go to get the best experience while helping out the big guy. For all of you that missed the extravagant yet chaotic and hectic shopping experience on Black Friday, don’t worry. The shopping deals and discounts are far from over in the city that never sleeps.

If you plan to be in the Big Apple during the Christmas Holiday Season there are a few places that must be visited in order to have the ultimate shopping experience.  For a limited time only during this season, vendors set up booths selling items such as scarves, toys, household items, ornaments, jewelry and candy.

2.     Bryant Park Holiday Shops: Bryant Park becomes a market-styled extravaganza this holiday season as it continues its annual tradition of festivities. With nearly 130 merchants from all over the world, the shops at Bryant Park should be at the top of your list. This free holiday fair also features the Bryant Park Pond where free ice skating takes place Monday through Friday.

3.     Union Square Park Holiday Market: Union Square Park during the holidays is the epitome of an outdoor shipping wonderland. With over 100 vendors with treats just for you, Union Square is a must-visit. Hot Cider is also served at special stands throughout the park along with other sweet treats as you shop!