St. John’s Veterans Get a Voice 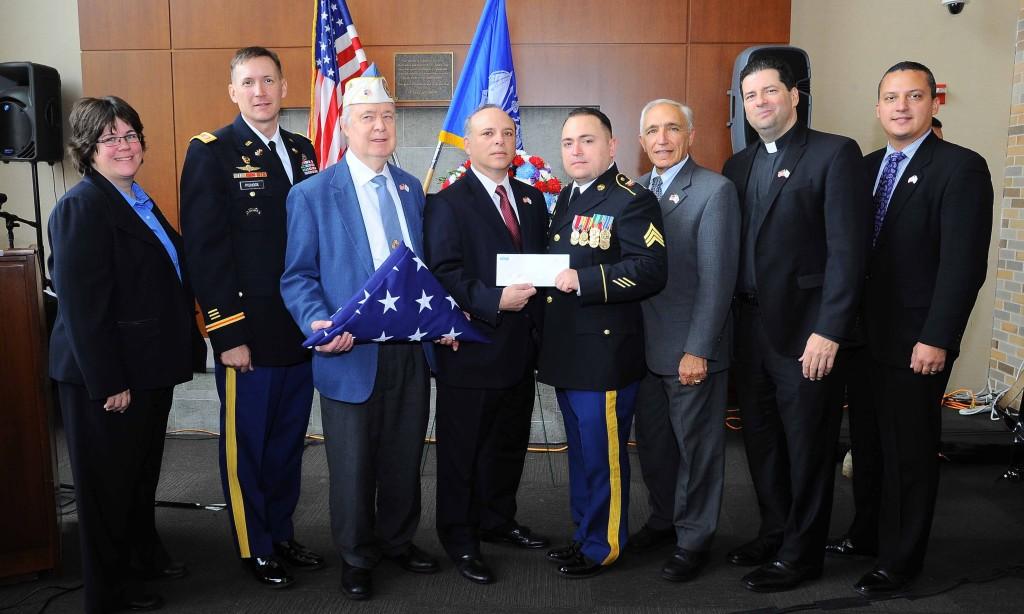 When Gus Garcia, 23, stepped on St. John’s campus after spending years away from a classroom, he was alone and uncomfortable. Although he was just a few years older than his fellow freshmen, he felt like he had little in common with students coming right out of high school, while he was coming right out of the Marines Corps.

It wasn’t until sometime later, when Garcia was able to connect with some fellow student veterans on campus, that he finally started to feel like a contributing member of the St. John’s student body.

Pointing to the table in the back of Marillac Hall, where he used to meet his other student veteran friends, Gus reminisced about those connections he made, “We just clicked.”

He explained getting to know other veterans on campus made him feel more at home and helped with his transition from the military to school.
“When I first came here I came to school and left,” he said. “Now I have some friends, not just veterans;  you get back into the flow.”

With over four hundred undergraduate and graduate student veterans at St. John’s, Garcia was not the only one who felt the lack of a veteran community.
Jerry Ojeda, 37, is a disabled veteran who served in the U.S. military for 10 years. On 9/11, he was one of the first responders and began serving in Iraq when the war began in 2003.

Ojeda and Garcia, along with six other founders, teamed up. Their purpose, now detailed in their constitution is, “to provide a venue for cohesion, support, interaction and knowledge for all veterans, past and present, aboard the University so that they may be empowered to succeed in their transition from military service to their educational endeavors.” Thus emerged, the St. John’s Student Veterans Association (SJSV).

“There were veterans that would come up to me and say, ‘Hey would you want to start a organization?’ and so forth and I was very much interested,” Ojeda said. “Because when I first joined the school, I was pretty lost.”

Ojeda, now the president of SJSV, faced a lot of obstacles when re-entering academia after eight years away from a classroom.

Although it has only been two semesters, SJSV has hit the ground running. So far this semester, they have put on several events such as resume building and career networking. Throughout the semester, they will also be having transcript workshops and even faculty discussions.

Ojeda explained that many veterans entered St. John’s not accustomed to technology used by students on an everyday basis. SJSV is there to help veterans with things like operating St. John’s Central, Blackboard and even their St. John’s email accounts.

SJSV wants veterans to understand the benefits they receive because of their service. With programs like the G.I. Bill and the Yellow Ribbon Program, many veterans do not even realize they are eligible for a free education.

“Basically our tuition is covered,” Garcia, now SJSV Vice President, said. “Every month we get an allowance to come here.”

This May, Garcia will be studying abroad in Italy. That is something that many student veterans do not even know they are eligible for. He hopes SJSV can help keep student veterans stay in the loop on programs that he thinks they should be taking advantage of.

“A lot of veterans don’t know about the benefits that are out there,” he said. “There’s a lot of scholarships [and the] study abroad program.”

Both Ojeda and Garcia reiterated that SJSV is open not only to student veterans, but also to professors that are veterans, students considering the military, students who have parents in the military and even to those who are supporters of the military. Currently, they have about 30 to 35 members that show up to
general body meetings on a regular basis.

“This semester, we have seen a really good amount of participation,” Ojeda said. “We have had our meetings with some good substance.”
The group has been active in the community, assisting with Superstorm Sandy relief this past winter as well as putting on different events for its members that help raise awareness for different causes which include stopping violence against women in the military.

Ultimately, they want student veterans to know that St. John’s cares about them. The community is here to support them in anyway that they can and
welcome them with open arms, they said.

“Unfortunately a lot of people have post traumatic stress disorder and stuff like that,” Garcia said. “It’s different from being around other service members and then being around eighteen year olds. Nothing knocking them, just a different environment. Different life experience.”

Tomorrow, the association is hosting an event called, “Angelversary,” which honors two fallen Marines that lost their lives during service. The two young
Marines were also good friends of a member of the SJSV at St. John’s. The event will be held in the D’Angelo Center Living Room at 2 p.m.

In the near future, the organization has planned a trip to Washington D.C., where they want to visit the various national memorials. It also hopes to host many more events, get its name out on campus and continue to provide advice, support, direction and social interactions for student veterans at St. John’s.

“We put them on the path to success,” Ojeda said. “We are here to help veterans.”

He is confident that the organization will continue to flourish.

“We can never change what happened to us,” he said. “But, we can hopefully change the experience for others.”