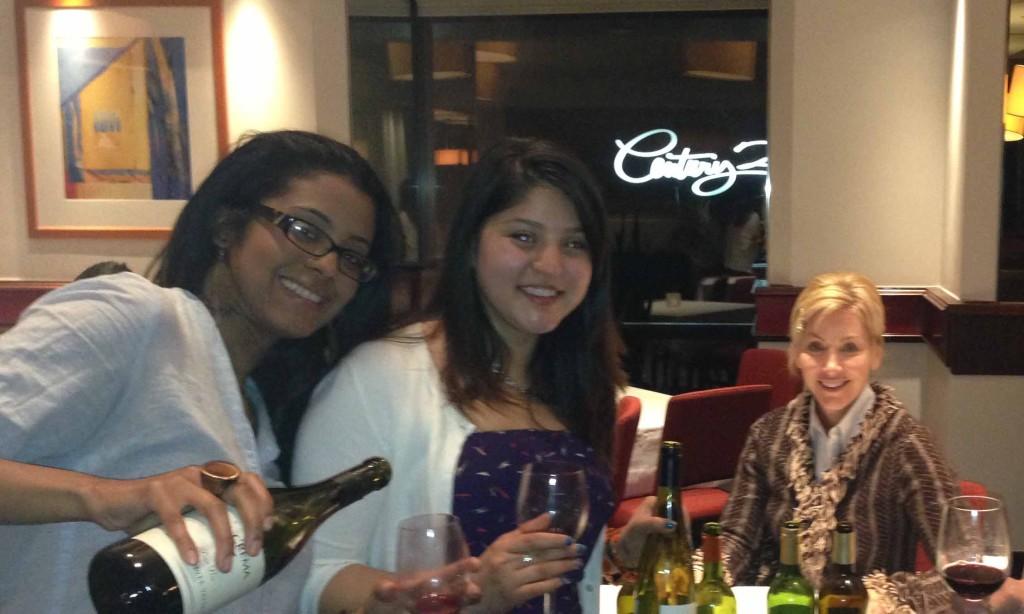 St. John’s resident assistant Zach Hedgepeth, watches as residents come in and out of their Manhattan dorm rooms with wine glasses in their hands.

Although the glasses are empty, he knows that they won’t be for long. Still, the resident assistant does nothing about it.

“The residence facilities are alcohol-free environments regardless of age,” states the St. John’s University’s Residence Life Handbook. Beer kegs, taps, or anything else that connects to alcohol consumption are banned.

Even being 21 years old, the legal drinking age in America, of-aged St. John’s University residents are not allowed to consume alcoholic beverages on campus. However, there is an exception.

Professor Dawn DuBois has been teaching St. John’s University’s only wine tasting course to 21-year-old students since 2009 on the Manhattan campus. Respectively, she is the only professor on campus that is allowed to give her students alcoholic beverages regularly.

Throughout the course, she teaches her students about wine in many different aspects: historical, geographical, climatical, legal, industrial, and of course- the tasting.

“You can’t possibly understand wine without tasting it. It’s like having an art class without drawing or painting,” DuBois said.

The course includes a textbook, a test almost every class, and multiple guest speakers that are in the wine industry. A $100 material fee to join the class is mandated in order for DuBois to buy the wine, although she sometimes brings wine from her own collection.

The objective of the course is to prepare students that are interested in pursuing the wine industry as a career. In the three-hour and three-credited class, her students taste at least (a sip of) eight different wines once a week- four white and four red.

“This is a tough class, unless you’re really going to work hard,” she says. An average of four to five students drop the course every term, and some even fail- DuBois said.

The course sometimes uses up to $475 of wine a week, allowing students to savor delicious alcoholic beverages from France’s Chardonnay to other mouth-watering wines from other regions.

Since the course does not supply appropriate glass wear, students bring their own wine glasses. Registered student of the class, Daniel O’Boyle, had his dorm room searched and his wine glasses taken away. Once verified that he attended the class, they were given back to him.

“I’ve had one or two occasions where students abuse the alcohol and allowed themselves to get buzzed and loud and I pretty much handled that. That’s rare,” DuBois said about the students drinking in her class.

To appreciate the wine to its fullest extent, DuBois does not believe her students need to swallow the beverage. Having it on their tongue is enough.

“I encourage them to bring a cup to spit into,” DuBois said.

DuBois pointed out that in Europe, wine has a different connotation than in America.

“Wine is a preferred beverage to water- wine was part of life. You don’t drink wine to get drunk. It was an enhancer for food, and a safe drink,” DuBois said about the culture of wine in Europe.

“In other countries, it is treated as an agricultural product, but in this country it is treated as a narcotic,” she added. The course also covers how the church played a big role in the development of wine in the past.

Ketienne Telemaque, the Residence Minister for Vincentian Service and Justice believes St. John’s University’s acceptance of the wine tasting course has nothing to do with the Catholic faith.

“As far as what the wine is, it is not ever looked at as an alcoholic beverage (in church), it’s always looked at as the blood of Christ,” Telemaque said.

In relation to the “dry” campus policy, DuBois and Telemaque both agree that St. John’s University enforces it for public safety reasons.

“The dry campus policy, from my understanding, is not a result of our Catholic faith but more as a result of (21 year olds) just being responsible citizens,” Telemaque said.

“You’re in a generation where the drinking age is 21. You can vote at 18. You can fight for your country and die for your country, but you can’t drink,” DuBois said. She believes 21-year-olds should be responsible enough to handle the correct consumption of alcohol in her course and outside of it.

“Wine isn’t the culprit,” DuBois said, “It’s the abuse of it-and the abuse of it comes from not respecting what it is and being undisciplined about your
consumption.”