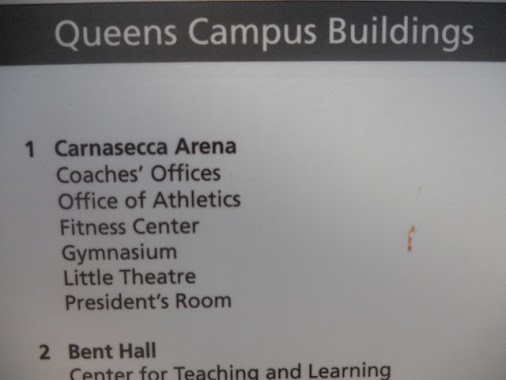 Being a member of the Naismith Memorial Basketball Hall of Fame, winning 526 games at St. John’s and achieving living legend status in New York is no guarantee that the University’s campus maps will spell your name correctly.
Carnesecca Arena is named for the iconic figure who spent 24 seasons as the St. John’s men’s basketball team’s head coach, but when students look for directions, they see the building listed as ‘Carnasecca Arena.’

The beloved Lou Carnesecca is known for building St. John’s into a national power, and for his sideline sweaters that were as loud as his personality. How, then, could such a mistake be made?

“It’s just reprehensible,” Bob Saunders, a St. John’s alumnus, said.  “It speaks to a lot of things. How could this happen, and what does this reflect? I think it’s just outrageous.”

“I think it’s just awful,” junior Taylor Brisco said. “He’s a legend, so much so that our main arena for sports is named after him.”

‘Carnasecca Arena’ is listed first on the campus maps all around St. John’s, which have a date of August 2011 on them.  The Johnnies have played in the gym since 1961, but it was called Alumni Hall until changed for the Hall of Fame coach on Nov. 23, 2004.  Oddly enough, a statue from that night, now in the display case in the lobby of Carnesecca Arena, reads, “Your Are St. John’s.”

University spokeswoman Elizabeth Reilly provided a statment via email, “As part of the University’s re-branding initiative, all campus signage and maps are being replaced to reflect the new University logo and any necessary corrections are being made at this time.”

Perhaps a reason that the misspelling has gone largely unnoticed is because of the lack of attention they receive.  Many students walk right past them without second thought, and even if the map is being read it doesn’t mean they’re looking for ‘Carnesecca Arena.’  A quick reader might even skip over the snafu.  This is not meant to downplay the situation.

“It’s awful,” Janet Kleiner, who earned her Master’s Degree from St. John’s, said. “How can no one pick up on that?  It’s an unusual name, but who’s overseeing the production of that?”

Ironically, the man who cares least about the spelling error: Lou Carnesecca.

“Don’t worry,” he said. “It’s been killed a thousand times.”