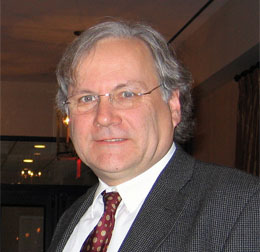 Robert Tomes did not always want to be a history teacher.

The author and St. John’s professor said when he was a little boy he planned on taking Mickey Mantle’s job for the Yankees.

“When he was retiring, I’d be in my early twenties,” Tomes said. “Just the right age to take the job.”

His dreams of playing centerfield at Yankee Stadium were eventually dashed when in high school, he learned how hard it was to hit the curveball.  He said plan B was to become a rock and roll star.

“I was in a band for many years, then went solo,” he said.  “Then at age 30, I realized I was better at writing than writing songs.”

The 1960s and 1970s were influential to Tomes, who teaches Contemporary United States History and History of the Vietnam War courses at St. John’s, in addition to Discover New York and the Honors core history requirement.

“I had a sense that all of these significant changes were around me,” he said. “I sensed I was in something that needed studying and figuring out.”

Tomes has written several books including “Apocalypse Then: American Intellectuals and the Vietnam War, 1954-1975,” which was called “A noteworthy achievement” by the American Historical Review.

Having been at St. John’s since 1988 does not mean he is set in his ways.  “Everyday is a new day for me in the classroom,” he said. “I try to keep fresh.  I really feel that particularly at St. John’s where I’m not really teaching history majors, it’s very compelling to me to make history interesting to them.”

“Dr. Tomes goes completely against the stereotype of a stuffy professor,” he said. “He knows his stuff, and has the resume to prove it, but he doesn’t take himself too seriously, and I think that helps students relate to him and makes the learning process so much more engaging.”

Hirshon said Tomes is the type of professor who has former students coming back to campus to visit him one or two decades after they have had him.

“Because they really respect him but also have fond memories of all his jokes,” Hirshon said.

Tomes, being a history lover himself, said one thing that bothers him is that so many Americans have distorted views of the past because of the current entertainment media culture.

“We don’t want to be interested unless it’s entertainment,” he said.

This is something that concerns him, especially with the 50th anniversary of JFK’s assassination approaching.

“You could get a team of professional historians, and they’d have a busy day sorting through what Oliver Stone made up,” he said of the 1991 movie “JFK,” which deals with the cover-up of the Kennedy assassination.

He feels that the heavy emphasis on reading and math in grade school has taken away from other subjects, including history.

“By the time they get to college, they’re overwhelmed, don’t know the facts or how to formulate an argument using facts,” he said. “My job is

to make you think.  I don’t care what you think as long as you think critically.”