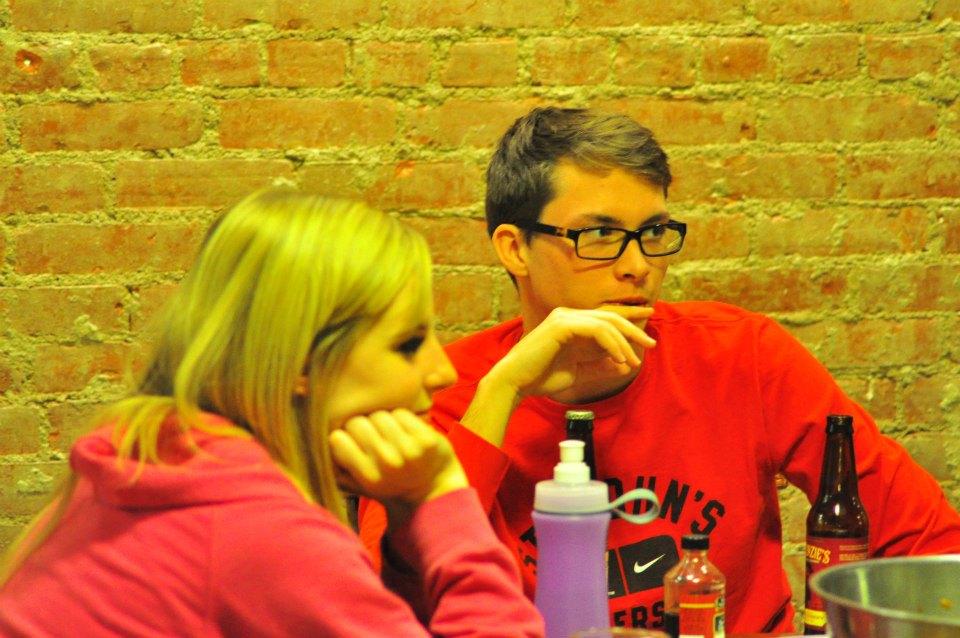 The night started out like any typical Friday in college.

Hayden Nichols and his group of friends attended the Red Storm Tip-Off at Carnesecca Arena Oct. 25. They watched Lupe Fiasco perform on stage and then the group made plans to hang out at a friend’s off-campus apartment afterward.

But the night that started out normal ended in tragedy.

According to Malinda Nichols, Hayden’s mother, the 19-year-old St. John’s sophomore fell four stories from a friend’s apartment balcony that night in what witnesses describe as a freak accident.

More than a week after the accident, he is in critical condition at New York Hospital Queens in Flushing, Malinda said.

Malinda sat down with the Torch last week and spoke through tears about her son, the accident and the road to recovery.

“I am taking it all in and it is insanity,” she said, sitting at a table outside of the D’Angelo Center. “A parent cannot comprehend what it feels like. You never even remotely thought about… no parent ever goes there.”

Hayden’s mother, who lives in Galveston, Texas, said she was getting ready to attend an employee picnic on Saturday, Oct. 26, when she got a call that would alter her world.

She was holding a freshly baked pie and heading out the door looking forward to fun-filled fall day when her phone suddenly began flashing with phone calls and messages. Malinda didn’t recognize the numbers and started going backwards listening to the messages. The first message came from a St. John’s administrator, then Hayden’s landlord and then the hospital. She called back the administrator first and heard the worst. Hayden had been in an accident.

This all happened at 10 a.m., Malinda said. Two hours later, she was boarding a plane to be by her son’s side. As frantic as it must have been, Malinda still remembers the details. She called a friend who paid for the $1,800 flight and drove her to the airport. She left her younger son Chance, who is a senior in high school, in the care of another friend. And she spoke to Hayden’s neurologist on the ride to the airport.

“I cried the whole way,” she said.

Malinda said on the flight to New York she had no idea what to expect, but she reassured herself Hayden would be okay. He would wake up, she would stay for a few days until he could leave the hospital and she would return to Texas. That’s what she thought.

But what she found in a hospital bed was not the witty, sarcastic, lively boy she left in New York.

Hayden has a traumatic brain injury, she said. He has multiple broken bones in his face and his pelvis is broken in three places. He has a large fracture of his femur bone and some other fractures as well.

Malinda said her son is lucky to be alive.

What exactly transpired Friday night is still somewhat unclear. According to party attendants and from what Malinda said she has been told by detectives, the party was being held at the apartment of a friend of Hayden’s on the fourth floor. The party was getting loud and the police came. As the police were leaving, they saw Hayden on the ground.

Daria Coney, a recent St. John’s graduate and party attendant, said everything happened quickly and that most people didn’t know how the accident occurred.

“One minute people were leaving, the next people were coming back to tell us someone had fallen and cracked their head open,” she said. “And next, someone came and told us Hayden had fallen from the balcony. It was all unimaginable at the time and I don’t think anyone knew how to react.”

So many unanswered questions remain for Malinda—was it fear of the police that caused Hayden, a kid that she said has never been in real trouble, to fall? Did he think the drop wasn’t that far and try to jump? Did he slip? According to Malinda, Hayden’s alcohol content was equivalent to less than a beer at the time of the accident.

“Nobody will really know what happened until Hayden wakes up and he talks,” Malinda said.

But Malinda wants to reassure all who were at the party that no one is at fault and sometimes bad things happen to good people.

“I never want any of those people there to feel any level of guilt, like they had anything to do with this,” she said.

Hayden is popular at St. John’s.  He is a member of the Improv Troupe and an intramural soccer player. He works at the campus television studio and is well thought of among his professors and peers.

“I always enjoy talking to Hayden,” Dr. Thomas Kitts, Hayden’s English professor, said. “Besides being an excellent student and writer, he has a great sense of humor and a wonderful curiosity about things.”

Hayden can often be seen skateboarding around campus. His tall stature, blond hair, blue eyes and welcoming smile make him easy to spot but he is most well known for his sense of humor.

Billy Marengo, a sophomore and former member of the Improv Troupe at St. John’s known as the “Bad Astronauts,” considers Hayden a close friend.

“He is the most confident guy in the room during Improv,” he said. “The stage is his to conquer. That’s where you see him just blossom.”

Marengo added, “Hayden is one of the funniest guys I have met. He has so much ambition while still being relaxed. He is a very caring guy who just has a good heart and unending sense of humor that could make a sad moment into a happy one.”

Malinda said Hayden is the sort of kid that every mother wanted to have.

Despite all Hayden is enduring, Malinda is extremely hopeful. As a star soccer player in high school, Hayden has a lot going for him, according to the doctors. His athleticism as well as his strong and young body should help his recovery.

Malinda remains positive, prays a lot, relies on her faith and thanks the St. John’s community for its support. She said she has been amazed with the outpouring of help from her friends, community at home, family, sorority sisters, Hayden’s landlord, the hospital workers and everyone in between.

“Great sense of community from all the students,” he said on behalf of the University. “We’re a big University family and we are displaying our Vincentian and St. John’s values.”

A university spokeswoman added in a statement: “This outpouring of support is indicative of what makes the students at St. John’s so special.  We will continue to pray for Hayden as he recovers.”

One of Malinda’s sorority sisters from college set up a Give Forward donation site for Hayden. The site has already raised over $10,985. As a single mom with hospital, travel and food expenses to consider, she appreciates the help. She is currently staying in Hayden’s apartment near campus.

“The campus community has been amazing,” Malinda said, tears streaming down her face. “When you are sending your son away, 2,000 miles to a place you have never been…he landed in a very good community. I know that he enjoys it.”

On Thursday, Malinda had to un-enroll Hayden from classes. She said Hayden is on a full presidential scholarship at St. John’s and is technically ahead one year because of all the credits he came in with from high school. Withdrawing him from classes, Malinda said, proved to be exceptionally difficult.

She spent the afternoon before withdrawing Hayden touring St. John’s and learning all about the place her son calls home for a good portion of the year. She had a personal tour of the television studio where Hayden works, stopped in to chat with his bosses and walked the halls Hayden walked just a few days ago. Malinda said she understands why Hayden loves St. John’s so much and she looks forward to him gracing the campus again soon.

For now, the message all around remains, “Hope for Hayden.”

“As his mother, I know he is an extremely determined individual,” Malinda said. “He’s got fight in him.”

To donate to #HopeforHayden visit: