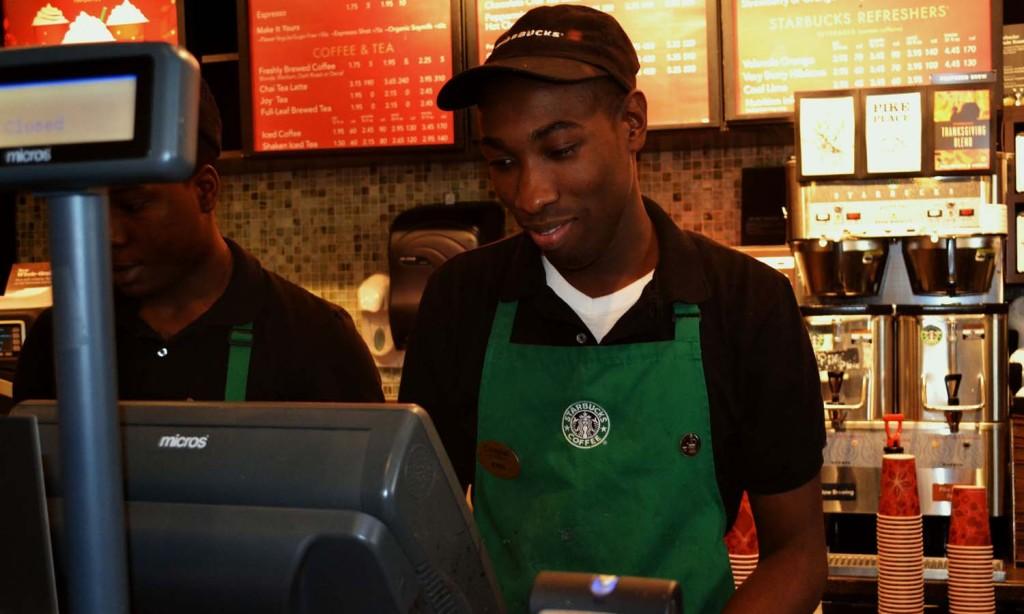 Java John serves up coffee and the occasional beat to customers at Starbucks.

It’s Monday morning at 9 a.m. right before the most popular morning classes start. In an instant, the line starts building and a rush of students pour into the small space. Starbucks is booming at the peak hour of the day, students desperately seeking their morning cup of coffee, special drinks and maybe even some breakfast food to perk up and prepare them for the rest of the day.

Most don’t think about the people behind the counter, maybe it doesn’t really pass their mind after they order their complex drink and pay.

But the Starbucks workers have to start their day long before the line begins to form. They must come in to start up all of the machines, stock the refrigerator shelf with a large variety of cold drinks, pre-packaged sandwiches, salads and snacks.

The small bakery counter has to be stocked with fresh bagels, muffins, scones and other treats. The store does not restock itself.  The workers have to come in early to prepare the food and the barista’s have to make sure all of the equipment is clean and ready to face the mad rush of eager Starbucks-enthusiasts.

Jonathan Scott, 24, or “Java John” as he is called, is one of those employees who aids in the process of preparing the campus Starbucks for the day’s mass volume of customers. Java John has a unique story. He essentially lives a double life.

Leaving his home in Flatbush, Brooklyn at 5 a.m. Java John takes three trains, to make it to campus on time. He has been an employee at the Starbucks branch at St. John’s for 2-and-a-half-years and arrives promptly at 7:30 to start his 8-hour shift. Balancing between preparing drinks and register, he said that he probably serves more than 500 people a day, to whom he often raps for when they ask.

Java John is not your average Starbucks employee; he’s a barista by day and rapper by night. Under the stage name “JAY SUPREME,” he spends most of his nights attending other shows and events to get connections and network so that he too could perform at these venues in the near future. He is currently working on his mix tape titled, “The Force,” which is halfway finished and he’s pushing his way to making it big.

With his team, N.E.O.M., (The New Era of Music) behind him, he has worked in his fair share of professional recording studios. When asked more about his sessions in the studio, he casually slipped with a smile that he, “has connections to Jay-Z,” which led to an array of questions. This got him talking about whether he’d want to be signed under ROC Nation, Jay-Z’s record label, to which John responded a firm “no.” But he also said that it’s not totally out of the overall equation.

He’s currently trying to launch himself into the industry as an unsigned “Independent” under N.E.O.M., saying that being signed at a major label in the future, rather than at the start, is the goal. He would rather start out independent.

“I’d rather create my own success, and have more creative control,” Java John said. “Then when I can prove myself, I have more control and I can do it my way.”

Java John explained that it’s easy for artists trying to start out get taken advantage of by the big record labels.

“They would get more from what I built than I would,” he said.

Starting to open up about his work, the passion coming from his voice is noticeable as he explains the innuendo of “Star Wars” quotes he used to enhance his verses throughout, “The Force.”

“Can I go nerd for a minute?” he said, as he starts to explain the concept behind this piece of work.  On a track titled “King Super,” he explores the concept of being a martyr, and he referenced the line from “Star Wars.”

“You can’t win Darth, if you strike me down, I shall become more powerful than you,” he said.

Java John further explained that once people are to the level of a “king,” there’s much responsibility and paranoia and lack of trust associated, which
inflicts an internal battle.

“It compliments the martyr aspect of the song, saying he is more powerful dead than alive,” Java John said. “That’s how the theme of “Star Wars” plays its part in the reality of the song, because I believe the best fantasy is
realism.”