Pizza shop battle under the bridge 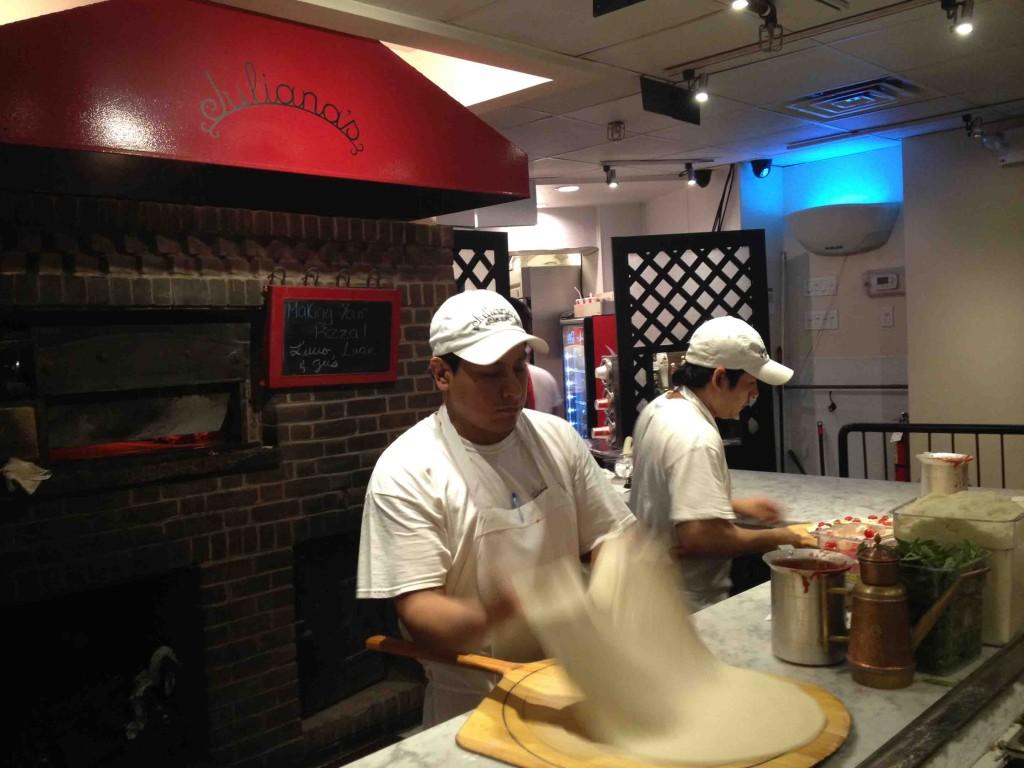 A satisfied customer with a toothpick in his mouth exited the restaurant assuring the crowd that the pizza was well worth the 45-minute wait.  Whether you’re a local, or an honorary New Yorker who is looking for something delicious to satisfy the appetite you’ve worked up after the long, scenic trek across the Brooklyn Bridge, Juliana’s Pizza has a pie to try.  But, next to Juliana’s, sits another pizza restaurant called Grimaldi’s, and with the two comes as much controversy as delicious food.

The two establishments at the foot of the Brooklyn Bridge share something more than being neighboring pizzerias.  Much has been written about the two competitors, but perhaps a local New Yorker tells the story best.

The short version of the story, according to Roberta Langella, who moved from Brooklyn and now lives in Harlem, is that Patsy Grimaldi opened his Patsy’s Pizzeria at the original Fulton location. She said that Patsy sold the restaurant to Frank Ciolli. However, the landlord eventually evicted Ciolli, and Patsy came back, this time as “Juliana” after the name of his late mother.  Ciolli, she added, opened a restaurant in the building next door, now called Grimaldi’s.  But in addition to the business competition, a legal food fight of sorts ensued.

According to press reports, Ciolli alleged that Patsy was unfairly competing with him after selling him the good will of the business, and the two have reportedly called inspectors to check on the legality of each other’s coal ovens.

All these controversies aside, the question remains: which is the better pizza?

Robyn Footlick, a close friend of the Patsy Grimaldi family, said that since the opening of the restaurant over a year ago, locals have been torn between letting the out-of-towners know about Juliana’s, and “keeping the secret for themselves.”

Ms. Langella clearly takes sides in the disputes noting that Juliana’s is the one and only original pizza.  She says that she and her family put their money where their mouth is: “My brother was their first customer the first day they opened, we had my father’s 80th birthday here … so it’s like a family tradition even though they still make me stand in line like everyone else,” she said jokingly.

While inside Juliana’s, a customer gets to observe the pizza making in action.  In addition to the quaint New York photos which decorate this simply-designed restaurant, check out the Juliana’s FAQ chalkboard where you will find fun pizza trivia such the right temperature for a coal oven (800 degrees F) and Frank Sinatra’s favorite pie (sausage).

Next time you venture out past Union Turnpike to find a good slice of pizza, go to 19 Old Fulton Street in Brooklyn, get a pie at Juliana’s and maybe even step into Grimaldi’s for the pizza test.