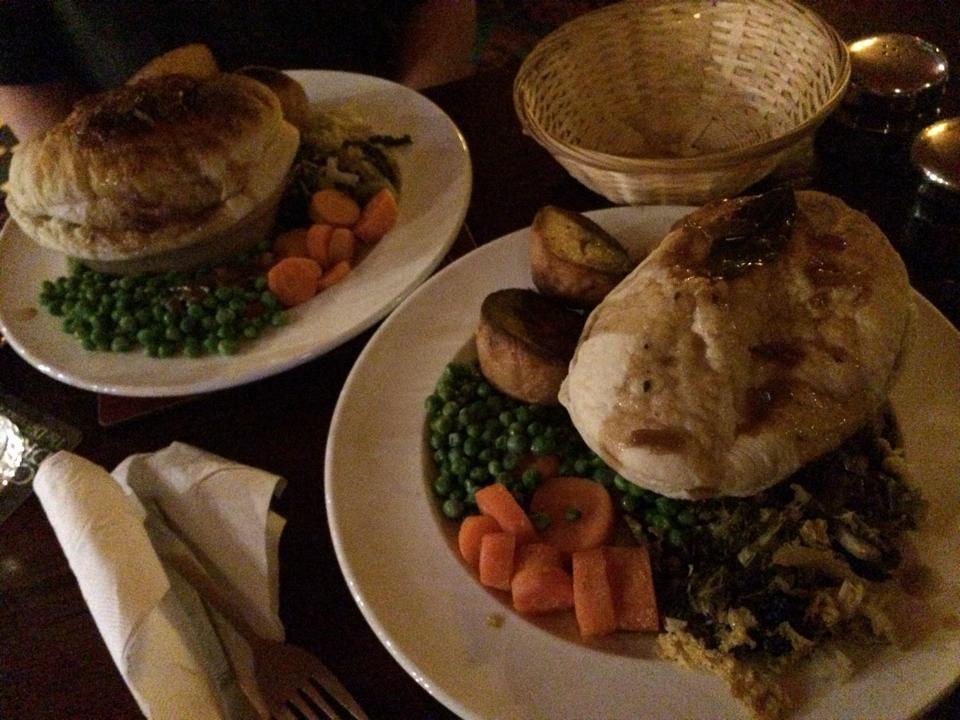 Steak and mushroom pie was one of Kyle’s first meals while studying abroad.

In the fall semester, I was presented with the opportunity to continue studying for my major while living in Great Britain instead of the usual Discover Europe escapade. So as my winter break concluded I left the land of avocados and palm trees and, a day later, entered the realm of perpetual rain and streets where cars drive on the left-hand side of the road.

As I exited Leeds/Bradford airport, two thoughts came to mind: ‘Wow, this place is a lot colder than California’ and, ‘It could be worse, I could be in New York.’ With my first study abroad revelation in hand, I made the short trip to my accommodation: an abandoned brewery in Kirkstall four hours north of London. While I do not have a room sitting on the edge of the Leeds and Liverpool Canal, I do get a decent view of Leeds Rugby Academy, of which I know nothing about.

Although I have only been here for three days, I can say that I have encountered the expected and the foreign.

I was only a day-and-a-half situated into my new home when I met two new friends outside the Brewery: Marcus, hailing from Sweden, and Frankfurt-born, Felix. It was only when we were walking that I noticed they both towered over my 5’7” frame. As I continued to think about how much greater my life would be if I were three inches taller, us three and an American friend of mine talked about soccer (or football, I guess). Again, something I don’t really know anything about. But I was more than proud to say 10 words and nod my head in that 45 minute discussion about FIFA and Dortmund, Felix’s favorite team.

Probably the worst part about Leeds, the city where my new campus is situated, is the rain. With the ever-damp roads and mushy grass, the last thing one would want to do is walk around for an hour in the dark trying to find his or her way back home. But, in my typical “let’s make things harder than they have to be” fashion, that is what I did. I ventured onward and when I reached civilization, I began to fancy (a British term that I have only used once, which is now) warm food and a warm place to be. Wait, that’s a pub.

Believe it or not, it’s difficult to find food in all the pubs, at least where I live. I eventually came to an unassuming place simply named West End House. Although I hoped to try haggis – a Scottish pudding consisting of sheep lung, heart and liver – it was not on the menu. But, clever as I am, I adapted to the situation at hand and approached the bar to place my order: steak and mushroom pie. Ten minutes later a mound of puff pastry waltzed its way onto my placemat and was heartily consumed with water, my nonalcoholic drink of choice. I consider that to be a pretty successful end to my weekend.

That concludes all the high-octane adventures I encountered for now. Cheers (a British term that, again, is my first and only time using.)

Kyle is the Online Editor for the Torch and will be writing a story each week while he is studying abroad this semester in England.