Lieutenant leading and learning on campus 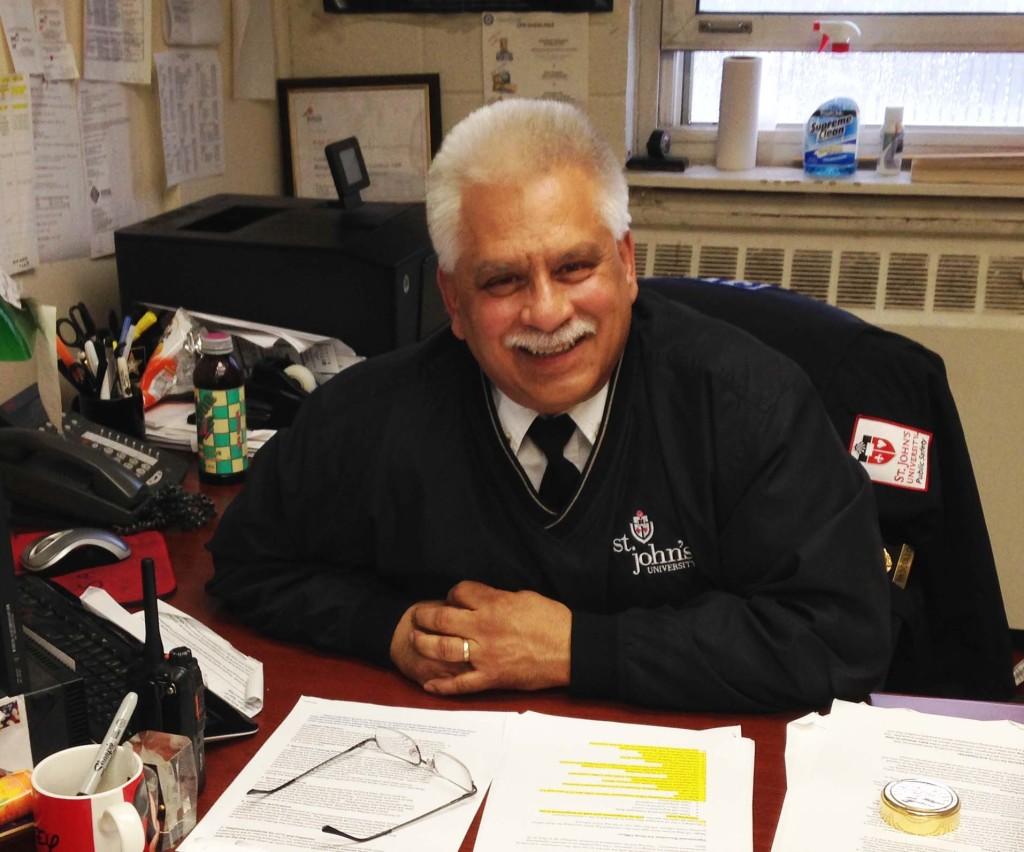 Lieutenant Ralph Pascullo at his desk in his office at St. John's

Lieutenant Ralph Pascullo sits at his desk, leaning forward with his arms folded. The St. John’s logo is sewn into his jacket resting over his heart. His NYPD badges hang on the wall in a picture frame above his head.

The 61-year-old is surrounded by papers, books and photos of his family. He smiles wide, his eyes glistening as he talks about his three children and wife. A photo of him from decades ago is part of a collage made for his police department retirement. He sports that same genuine smile.

Pascullo is the current St. John’s Department of Public Safety Lieutenant and Training Coordinator. But that’s not all he is. He also is a student.

Decades after he completed his bachelor’s degree, Pascullo decided to take advantage of the opportunities his position at St. John’s provided him. One of those opportunities being—free classes. He is in his second semester now, on track to receive his masters degree in Criminal Justice Leadership by 2016.

“I am obviously a non-traditional student,” he said. “I am the oldest person in the class.”

Also a family man, Pascullo can’t help but brag about his three children and wife. His son is getting his second masters degree at St. John’s, his first daughter is a nurse and his youngest daughter, still in high school, loves to help others. He said all his children are passionate about education.

“I think they are proud I went back to school,” he said.

Pascullo said he always wanted a masters degree. This semester he is taking Constitutional Law and Public Administration. People will often ask him in his classes, why are you here? He was a leader in law enforcement for nearly three decades.

At first Pascullo said he was intimidated by the classroom, but now he is excited to hear what professors think about the field in which he spent most of his life working.

“The professors are so knowledgeable that they bring up things that I never thought about,” he said. “I might have done it in principal, but now I want to learn exactly what the experts think about it.”

Pascullo, originally from Flushing, joined the Police Academy in 1973. He worked hard, even went back to school at one point to get a four year degree. He advanced through the ranks.

“I was a good street cop I believe and I did get promoted,” he said.

He was assigned to the most elite unit in the NYPD, the Emergency Service Unit.

As a result, of being in that group, Pascullo became the task force leader for New York State FEMA Urban Search and Rescue. He said that meant he got to respond to all sorts of disasters in and around the United States including Hurricane George, the first World Trade Center Bombing and the Atlanta City Bombing during the 1996 Olympics.

Pascullo spent his career doing everything from defusing hostage situations, responding to bombings and fighting terrorists. He was on scene during the attempted subway bombing in 1997 that inspired the book, “Jihad in Brooklyn: The NYPD Raid that Stopped America’s First Suicide Bombers.”

He is also currently security for a member of a North African royal family. He retired from the NYPD in 2000 as Deputy Inspector, Executive Officer of the Special Operations Unit, after 28 years of service.

“I really have to say I had the greatest ride in the world in the NYPD,” he said.

Pascullo said he was at the top of career at the time of his retirement. He did not want to retire, but he had a heart attack.

“Once the medical condition occurred the career was over,” he said.

The morning of his heart attack Pascullo had come from a midnight tour of duty. It was a difficult situation he said, but nothing out of the ordinary. It was a barricade hostage; a man was holding a knife to his daughter for six or seven hours. Wearing a heavy vest in the summer and negotiating behind locked doors was not unusual for Pascullo he said. But when he came home that morning he suddenly felt a burning feeling in his chest. He called the ESU and told them he thought he was having a heart attack. He was right.

Two stents later, the Police Sergeant came to his bedside in the hospital and told Pascullo his career was over.

“I wasn’t prepared for what happened. I was still right in the prime of what I was doing. Happy with what I was doing. No intentions of leaving. And then one day you are told it’s over,” he said. “One day you wake up top of your game and the next day some guy comes in and says you know this is finished.”

Pascullo said it was devastating. He spent a few months at home, but he couldn’t sit still. He got a job at Shea Stadium as the Chief of Security. Still not satisfied, he also took a side job as the Inspector General’s Under Cover Agent for the Off Track Betting Corporation for the City of New York.

Despite being retired, on Sept. 11, 2001, Pascullo went straight to Ground Zero to help. He said in all his years of service, he never saw anything like it.

He can remember flying down Flatbush Avenue to deliver supplies to Ground Zero in a helicopter not long after the towers were hit. They were the only aircraft in the air and Pascullo said they were probably the first people in history to see what the towers looked like after they had first gone down.

“Never expected anything of that magnitude,” he said. “I don’t think anyone did.”

A very large percentage of people he knew died that day.

“That was a tough time,” he said. “When September comes around, you start to think about it.”

Pascullo said his position at St. John’s has been more than he could ever imagine. He knew some people at St. John’s from his time in law enforcement and knew of the tuition remission program for the children of employees. His children were almost college age so he decided to try and get a job at the University. Next thing he knew, he was a Public Safety Officer. He started at the bottom, moving up the ranks quickly. He is now a Lieutenant, the highest uniform rank in Public Safety. He cannot speak anymore highly of St. John’s.

“I think it saved me from what I missed in the Police Department,” he said. “It is a pleasure to be here. It is such a pleasant place to work.”

Pascullo has now been at the University for almost 10 years. And because nearly 75 percent of the Public Safety Officers at St. John’s are retired NYPD or New York Corrections Officers, Pascullo said it feels like home.

“That brotherhood is very, very hard to find any other place in the world,” he said about the NYPD. “Here at St. John’s though, I have to say, it comes close.”

“The Department of Public Safety and the St. John’s University community are extremely fortunate to have such a dedicated and knowledgeable individual on our team,” Lieutenant Thomas Lawrence, the vice president of Public Safety, said. “Lt. Pascullo’s passion and enthusiasm to ensure the safety of our campuses along with the training and experience obtained during 30 years of service with the NYPD is unmatched.”

Pascullo said St. John’s is a great place to work.

And soon he will hold a masters degree from the University he loves.

“I always felt that you should never stand still in life,” he said. “You should always try to improve.”