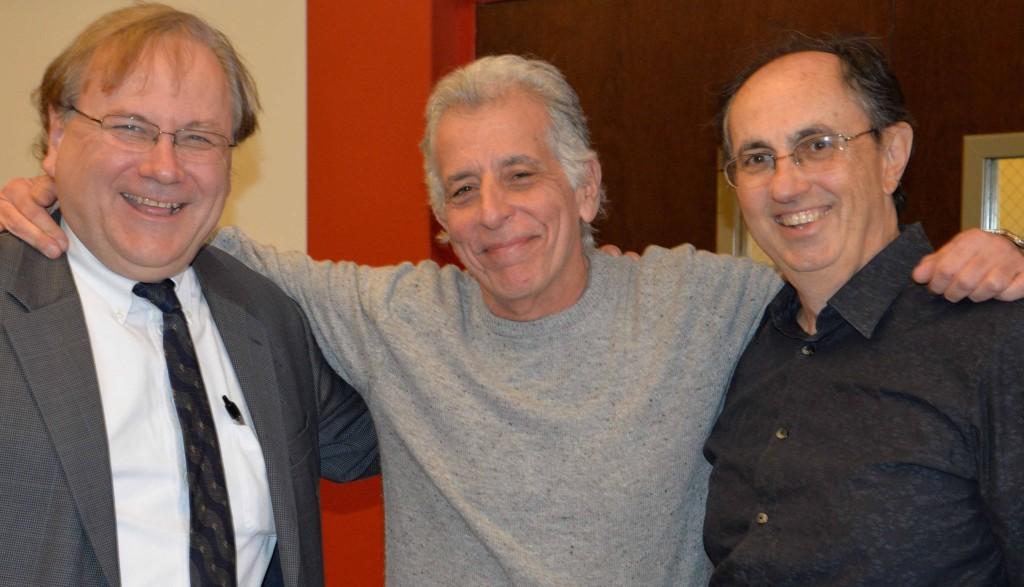 Tomes, Pitilli and Kitts have a writing group where they give advice and critique each others work.

Students can usually be seen studying together and reviewing each other’s work over lunch in Marillac Hall. What may be surprising to some though is when they see professors doing the same thing.

“Working in a group, for me, is a huge security blanket,” said speech professor Lawrence Pitilli.  “Writing is a lonely pursuit.  There is a light in the wilderness so to speak.  Somebody’s out there doing the same thing.”

Pitilli meets with history professor Robert Tomes and English professor Thomas Kitts to review their writings. “We just wanted to have an audience,” Kitts said. “We read whatever we’re working on to the others.”

The professors realize they can experiment a little more in front of a regular audience.

Kitts points out that taking a chance in certain settings can get you vilified.

“Some of those reviews can be harsh,” said Tomes laughing.

“There’s trust in people you’re with and I trust Tom and Bob significantly,” Pitilli said.  Kitts and Tomes have known each other for 25 years, and Pitilli has known them both for 15.

The writing group returned last fall after temporarily folding. There were 10 professors the last time, four or five regulars and a number of professors who dropped in and out. “You just couldn’t get your stuff read,” Kitts said. “You could spend 40 minutes on a few pages.”

Although the group enjoys what they do, they take it seriously.

“We get down to business,” Kitts said.  “We’re pretty methodical. None of us are really emotional. We’re not afraid to say ‘I don’t know.’ It’s good to have that safety.”

The trio write primarily for academic purposes, which can make transitioning to mainstream work difficult.

“I can never write the way they write in Rolling Stone, or the Village Voice,” Kitts said.  “It’s so lively.  It’s silly when I try it.”

“It can’t get free-flowing,” Pitilli explains. “Everything has to be documented, verified. It can’t be sensationalism.”

The professors are able to bring what they do in the writing group into the classroom.

“My mantra is great works aren’t written, they’re rewritten,” Pitilli said. He is able to show papers that have corrections all over them.

“I tell students, if we go through the process, they should,” he said.

Pitilli admits, “I’ve improved on my active voice thanks to Dr. Kitts.”

Tomes feels that it’s not always the writing that develops. “What improves as you get older is your vision, the passion you feel about certain things,” said the history professor. “Writing skills were honed pretty early.”

“For me, it’s looking forward to something,” he said.  “It’s a sociable thing as well.  I’m going to hang out with my buddies and do something that’s astute.”