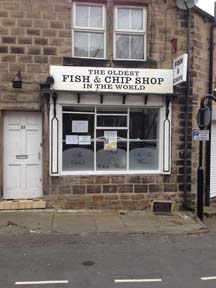 After I got back to my accommodations from a short four-hour trip to Caffe Nero in the city centre (I can spell it that way because I’m in England) on Friday, I reflexively opened up my news feed on Facebook. The first thing I saw was a Lent-inspired post from BuzzFeed regarding fish and chips. I hurriedly clicked on the link that took me to a list of 25 things I didn’t know about this dish.

It was point number four that sparked a particular interest. Interestingly enough, and as a huge coincidence, I learned that the oldest fish & chip shop in the world is located in Yeadon, just outside of Leeds.

“What a treat,” I thought to myself. I impatiently waited for the next morning (I was eating fish & chips while reading this post about fish and chips) to set out on my latest quest: an expedition to the oldest fish and chips establishment in the world.

I took the train from Leeds and got off at Guiseley, only a 10-minute ride. From there I set out on foot for a half hour until I reached Yeadon, another stereotypical-looking British town with stone buildings and a convenient location on top of a steep hill that was sure to set a raging fire in my calves. I reached my destination. On a small side street to my right at 23 Sandy Way, with only a small sign outside its doors. I walked directly across from the establishment to notice its designation as the oldest fish and chip shop in the world (it’s been serving the community since 1865.)

I stepped closer to the building. I noticed it was a bit dim, and then peered through the window to notice that it was uninhabited. I then looked at their hours of operation. They close at 1:30 pm on weekends and I arrived there a little bit after 2:00 pm.

So much for that.

Speaking of Ireland, it was St. Patrick’s Day on Monday!

I must have gone to Dublin, right? Or London? Nope, I stayed right here in good ol’ Leeds to partake in the local festivities. We actually celebrated it on Sunday, the day before one of the greatest days of the year. I set out for the city centre on Sunday afternoon and after passing a couple cross-lights exiting the train station, I was able to hear music. This was 10 minutes away from where I first heard it, so it was quite loud. Not that anyone cared.

This would-be-full-Irishman-were-it-not-for-his-part-French-Canadian-ethnicity was too excited to join the crowd and showcase his countless arm freckles. I entered Millennium Square. Upon entry, there were a few things I noticed: There were several hundred people in attendance. There was a small carnival for the children. There were two incredibly large and busy beer gardens. There was a stage not too far from me to which even more people gravitated.

I was first introduced to a group called The Pigs. I couldn’t understand much of what they were saying, but over the banjos, flutes, violins, guitars and drums I could make out a couple words that I deciphered as “We want to see you dance and want to see you jiggin’.” Very festive, this song was.

After they were finished jiggin’, traditional step dancers took the stage. Two Irish dancing academies were showcased while I was there. Unfortunately, it was rather difficult to see these kids dance while I was behind an unusually tall crowd. After they were finished, it was back to the music, this time brought to us by the Leeds Irish Society. I counted a group of over a dozen on the stage, with instruments including a guitar, an accordion, many flutes and violins, one drum and one harp.

The Irish Society played various tunes, some instrumental and some with lyrics. They even played a Scottish song; I only know this because they introduced it before playing it. The festivities continued to take place for what I’m assuming is the rest of the day; I left at 3 p.m. to satisfy some hunger issues. That pretty much sums up my weekend. Three traditions – Catholic, British and Irish – in as many days.

Kyle Fitzgerald is studying abroad in England this semester and writing about his excursions each week.