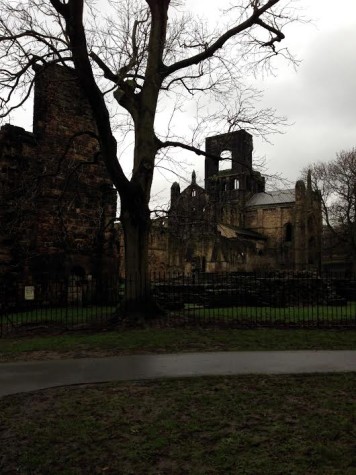 It was 7:00 p.m. on Friday when I began to hear a periodic muffling in my stomach. After identifying the cause to be hunger, I set my compass towards adventure. And what better place to start than Kirkstall Fisheries?

After my 10 minute walk up Kirkstall Lane I arrived at my first destination of the evening: my local fish n’ chips shop. It’s a very simple and small space; maybe holding 10 people inside it. But it is a festive one, with multi-coloured lights adorning the outside wall.

Anyways, I placed my order and was soon handed a partly-transparent wrapping of fish n’ chips with salt and vinegar (which I now prefer over ketchup). After I learned that they also sell battered Mars and Snickers bars I exited Kirkstall Fisheries.

My next stop: Kirkstall Abbey Park.

By the time I arrived at the park it was maybe 7:45 p.m. I passed the wild daffodils and found the bench closest to the River Aire. As I began to sink my teeth into my meal of the day, I took a moment to observe my surroundings. In front of me was the rive, but it was the background that notably drew my attention.

Beyond the river was the Brewery, my living space until the end of May. Along the road and even beyond that was illuminated by the street lamps lining the road. And then as my eyes began to upwardly scroll, the orange luminescence pressed against the musky purple-blue sky.

Then my eyes went back to the foreground, and as my ears focused on the dull roar of the canal I was passed by the occasional duck and even a pair of swans.

Not a bad place for a Friday night dinner, right?

Following my fancy feast I strolled about the park. I’ve been here a couple times before in the day time, but wanted to know how the evening affected its appearance.  It is a bit more eerie during the evening, but I guess that most ruins would be.

But what is the deal with this place, anyways? Why would I care to learn about it at all?

Less known than that famous coronation spot in Westminster, the Kirkstall Abbey is incredibly well preserved for being in ruins for over 400 years. This abbey was actually a monastery that housed monks of the Cistercian order. It came about in the year 1152 when a fellow named Henry de Lacy made a promise to Mary that he would create an abbey should he recover from a serious illness. And he did, so he did.

But how did this Cirstecian monastery cease to exist? Well, King Henry VIII had a large part to do with that. You know, the king famous for having the many wives. He was also the basis for a song by Herman’s Hermits. It’s an awful song; incredibly catchy, though.

Anyways, Henry VIII ordered that all priories, convents, monasteries, and friaries be disbanded. This followed him passing an order that separated England from Papal authority because he wasn’t granted an annulment. This five year period that spanned from 1536 to 1541 became known as “The Dissolution of the Monasteries”. And the Cirstecian monastery, now Kirkstall Abbey, was forced to be disbanded as well.

This monastery, unlike most, has remained well-preserved. It is even a Grade I listed building, meaning not too many places look as good as or better than this one.

It wasn’t until this time I viewed the Abbey, though, that I actually realized how well preserved it was. As I walked by the church I turned my head right to see the almost-intact church. Aside from the roof and the stained glass, it seems everything is there.

Having visited Westminster Abbey as well (which obviously loads me with all sorts of credibility and validity in this statement), I can say that my local Abbey is much more surreal than that of its much more well known compatriot. Sure, it may not have been the place where Will and Kate got hitched, or it may not be the potential grave site for William Shakespeare, but walking by this place with absolutely no expectations I could only be impressed.

So there you have it; a local Friday night adventure lasting approximately two hours. And all this started because I was hungry, just another reason why you should always listen to your stomach.