From Red Storm To The White House 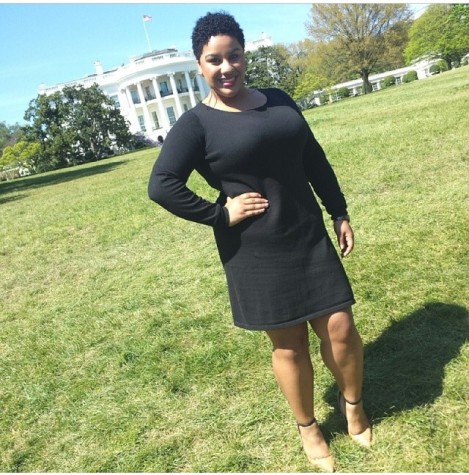 When St. John’s junior Najaah Daniels was working at the annual White House Easter Egg Roll on Easter Sunday, she met a 10-year-old boy who said he wanted to be a politician when he grows up. She was surprised; while politics and politicians are usually seen with ‘bad publicity’ around the world. The last time she had encountered someone that young who wanted to pursue a career in politics was years ago. This young, yet, bright and ambitious girl saw in the boy her 13-year-old self.  “You’re going to be my running mate,” she said to the boy.

“From the beginning, I knew my life would be different because of the color of my skin,” Daniels said. “Because I was being a woman and because I am a minority.”

She is majoring in rhetoric and public address at St. John’s, with a double minor in philosophy and sociology. As a child, Daniels had an unusual upbringing. She was born in the South Bronx and she lived with her biological parents until she was about 6 years old. Later, her aunt and uncle in the town of Pomona, Rockland County, N.Y., adopted her.

Growing up, she was strongly influenced by those surrounding her, who include her ‘strong’ adoptive mother as well as her five younger sisters, who motivate her to be the best role model she can be.

Daniels likes to think of herself as a “very self-sufficient” person who looks for opportunities rather than waiting for them to come to her.

Last year, through her own research and hard work, she was able to land an internship working for the Lawyers Committee for Civil Rights Under Law. She spent her summer as one of the two students picked across the country to work as a “FirstGen” (first generation) Fellow and a Public Policy Intern on Capitol Hill.

“I had an amazing experience,” Daniels said. “When I left (Washington) D.C in August and was back in school, I realized that I really wanted to try to work in the White House,” Daniels remarked.

Daniels wasted no time on trying to make her way back into Washington, this time, in the White House. Though the process was longer than it would be because of the government shutdown, she had a successful interview to work in the office of the vice president, more specifically in the Violence Against Woman Department with Lynn Rosenthal.

Within a week from hearing back from them, she was accepted to spend the spring working in the White House.

President Obama created the White House Task Force to Protect Students from Sexual Assault on Jan. 22 of 2014 just a couple of days before Daniels began her internship. This project is a combination of inter-governmental actions to prevent on-campus rape and sexual assault across the country.

This project has been her main priority during her time in the White House.

Working on an issue that she is so passionate about and working closely with these two individuals is a “blessing” to Daniels. According to her, the whole experience is “very unique, rewarding and challenging at the same time.”

“He (Biden) was elected senator of Delaware when he was 29 and my goal is to be elected a senator of New York when I am 29,” Daniels said.

Daniels sees Lynn Rosenthal as a “great boss and a great mentor.”

“She is dynamite,” she said.

Daniels talents have not gone unnoticed at St. John’s. The Associate Director of Events in the Office of Admission, Corinne Gentile, considers Daniels to be a “gem.”

“Najaah is one of my student ambassadors who assists with the events and gives campus tours throughout the year,” Gentile said.

“She is an incredible, inspiring, proactive self-starter who is absolutely making her mark on campus and will continue to leave footprints wherever her path may take her.”

Gentile had selected Daniels to share her inspiring story with the accepted students and their families during the Opening Session for Accepted Student day. She mentioned how proud she is of her accomplishments and that “she is exactly where she belongs.”

Assistant Director of Multicultural Affairs Andrew Bennett said he wasn’t surprised when Daniels was selected to work in the White House. He met her through the RISE Network mentoring program of which he manages. According to him, she stood out on paper and he was immediately impressed.

Though Daniels achieved a lot through her own hard work, she believes that students should take advantage of the career center’s resources and help.

“You need to know how to brand yourself,” Daniels said. “I feel like the career center is a great source to get you from point A to point B.”

Daniels might be away for the semester, but she is certainly not taking a semester off from school. She is taking the total of 18 credits, including her internship as well Spanish and online classes.

Daniels also pointed out that she believes that young people should get more involved, voice their opinions and become more aware of what is going on in our society.

“In our day and age, a lot of us are afraid to speak up because we are young,” Daniels said. “We have to have confidence in our abilities.”

She also wishes that more people her age would take more time to know what is going on around them. Daniels brought up the fact that only two of her friends on Twitter “tweeted” about a big decision that the Supreme Court upheld regarding the affirmative action, while many others were posting about something else, like the “new pair of sneakers that came out.”

Daniels is thankful for all her opportunities and is hopeful about her future.

She often uses Mother Theresa’s “Do it Anyway” poem in her speeches as well as a life motivator, especially in the part where Mother Theresa said, “Give the best you have, and it will never be enough. Give your best anyway.”

“In the next eight years, I would like to be elected official for New York and I am still looking into my options,” Daniels said. “Eventually I want to run for president.”