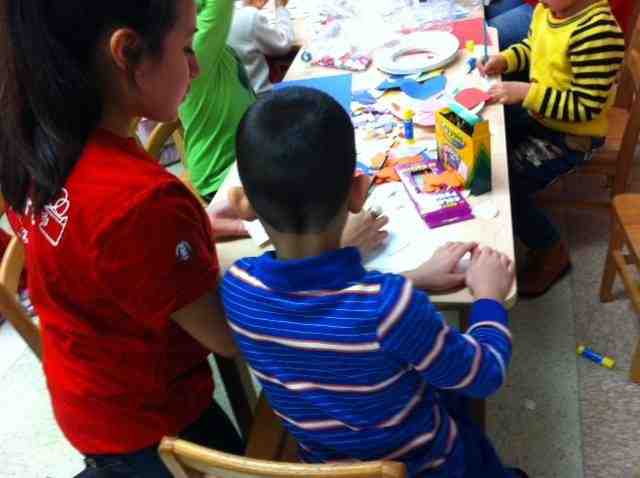 A St. John's student assists one of the kids in an arts and crafts project.

Lucy was a special little girl in a preschool in Jamaica, Queens who caught the eye of Desiree Francis about four years ago. Lucy was one of the many low-income kids that needed  extra help to reach her potential. Back then Francis was just a freshman, psychology major at St. John’s University. Lucy couldn’t speak a word of English and Francis couldn’t seem to get through to her.

Through the Jumpstart literacy program, Francis began working with Lucy and she quickly saw improvement in her communication skills and became completely bilingual.

Today, Francis is a senior at St. John’s and her story is one of many that students have to tell about their involvement with Jumpstart. It was due to the program’s impact that Francis is now a Childhood Education major with a concentration in psychology. She learned about Jumpstart when she was just a freshman walking around the university’s activities fair. At the time she didn’t expect that this literacy program advertised on one of the tables would have turned out to be more than just a great idea.

“I fell in love [with the program],” Francis said. “Everyone should do it.”

Jumpstart is a national non-profit and federal fund literacy program aimed towards low-income, underprivileged preschools. St. John’s students involved in it work with schools in the Jamaica, Queens area. According to Daniel Doncel, Jumpstart’s co-site manager at St. John’s, students are subjected to 300 hours of service divided equally into the fall and spring semesters.

According to Doncel, selected students are given a list of 20 books that they are required to read to the kids twice. The first time is for the kids to enjoy and the second time is to reinforce what they’ve read. The goal of those working in Jumpstart is to make sure they push the kids to succeed while learning from the experience.

“Their job is to try to get as much from the kids as possible,” Doncel said. “You get as much as you’re giving.”

This is the reason why they work on it not only when they are in the schools and with the kids, but when they are home as well.  There’s typically much planning behind the scenes for different sessions and activities.

Though the students that work with Jumpstart receive a scholarship of $1,195 dollars as compensation, students find that they gain much more value in their growth as a person and as a future professional.

“The program sticks with you even when you’re long gone,” Doncel said. “It’s a great experience to see the impact that [it] leaves on the little kids and the impact on the big kids.”

Junior Nora Melendez is one of the students who embodied the professional and personal growth seen in those involved in Jumpstart. The English major student with a double minor in journalism and photography believes that being part of the program was something different she did – and she couldn’t be prouder to step out of her comfort zone.

“I must admit I was intimidated and didn’t think I would get it,” Melendez said. “But luckily I did and was offered the team leader position and everything just went from there.”

Melendez also added that the program changed her perception on education.

“Every child, no matter how disruptive or quiet they can be, has the potential to learn beyond what everyone else thinks they’re capable of,” Melendez said.

Melendez shared the story of a student named Andres who was obsessed with superheroes. No book would please him since there were no superheroes or activities, which would bore him because no character could fly.

“One day we read a book called ‘One Dark Night’,” she said. “It’s about how a mother cat saves her kitten from a horrible thunderstorm and gets them warmth and shelter. During their time, the children had a chance to come up with their own story at the writing center.”

Melendez continued by saying how Andres created his story as if the mother cat was using her super strength to save the kittens from an oncoming car, and his imagination kept running with that idea..

It was because of small moments like this that she believes Jumpstart changed her life.

“Education has always been important to me but I never thought I would have this active of a role within it,” Melendez said.

The program is great for St. John’s students involved and all majors are invited to participate. However, their impacts on the schools that are being helped are even more significant.

According to Melendez, those who can afford to go to preschool have a better outcome and a richer vocabulary than those who lack the funds. The gap between those kids in these two different social classes increases over the years.

“By the time these children reach elementary school that word gap can be a difference of up to 15,000 words or more.” Melendez said. “That literally sets up children from low economic backgrounds in a game of tag, trying to catch up but never fully being able to.”

Still, Jumpstart can pose some challenges. Francis, for example, said some teachers might feel a little protective over the kids at first, but believes that “once trust is established, everything is smooth.”

She also said that the amount of patience needed is significant – they’re never alone.

“Besides your team you also have the teachers,” Francis said. “The big issues are always on the teachers and you’re never by yourself.”

Junior Quintisha Upchurch also believes that the program nurtures not only the children but also the students that work with them. The Speech Pathology and Audiology major worked with the program during her freshman and sophomore years and said it was life changing.

“It made me aware of the education gap and really passionate about educating the children,” Upchurch said. “Everyone deserves an equal opportunity.”