The happiest show on Earth 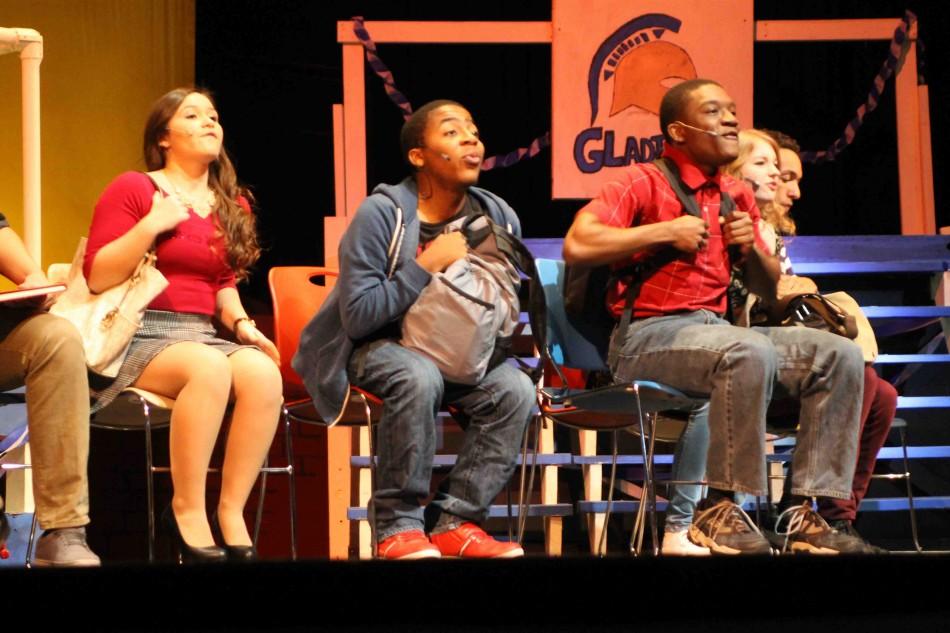 The members of the university’s Chappell Players Theatre Group premiered their musical titled CabaDisney on Nov. 20 in the Little Theatre.

All of the proceeds from the cabaret went to the St. John’s Bread and Life Mobile Soup Kitchen. The Brooklyn-based organization travels throughout the city helping to address the issues of hunger and poverty.

“They work extremely hard to combat these issues and we are so happy every year to assist in their efforts,” CabaDisney writer and director Emily Abma said. This year, the Chappell Players managed to raise over $2,400 from the cabaret.

Every year the group puts on a cabaret show with a different theme.

This year, the cast selected a handful of famous Disney movies to create your everyday high school ensemble.

Charlie, played by freshman Keith Buxton, is the nerd who longs to win the affection of the school’s most popular girl.

Freshman Evgenia Vasilyeva plays Maddy, Charlie’s best friend and the over-achiever in the show. She wishes to be pretty and is secretly in love with him.

Maddy even goes so far as to try out to be a cheerleader in the hopes that Charlie will notice her.

Fellow freshman Darius Harvey, plays Nick, the class clown who to be taken seriously by his peers.

Brandon Lisama plays the jock shose dad pushes him to be the best basketball player but he instead aspires to be a cheerleader.

Throughout the course of the musical, the characters draw on several Disney songs to tell their story.

Emily Abma states that that staging the songs was the most interesting part for her.

“We knew we couldn’t just stick scenes from Disney movies onto the stage for obvious costume, set, and music reasons,” she said. “Thus, we had to come up with a creative way to incorporate Disney songs. Since the music of Disney is so universal, we decided to use the existing themes within Disney lyrics to tell a story.”

During his tryouts for the basketball team, Charlie and several male members of the cast sing, “I’ll Make a Man Out of You,” the renowned song  from “Mulan”.

Determined to fit in with her peers, Maddy sings, “Part of Your World”, inspired by The Little Mermaid. During a cafeteria scene, the cast bands together to sing, “Be Our Guest,” from “Beauty and the Beast”.

The musical’s final number was “Get Your Head in the Game,” from Disney Channel’s “High School Musical”.

Abma is a senior majoring in education at St. John’s and is the current president of the Chappell Players Theatre Group.

This was Abma’s first time directing a full musical. In the past she assisted in directing, including their most recent show, “In the Heights”.

Abma does a fantastic job of tying in the high school storyline with Disney songs.

The songs were a way for the characters to express the struggles that they try to overcome.

Abma discussed her joy with directing the show.

“I had a wonderful time directing. It was a huge challenge but was extremely fun and rewarding to have a vision come to life with a group of fantastic people,” she said.