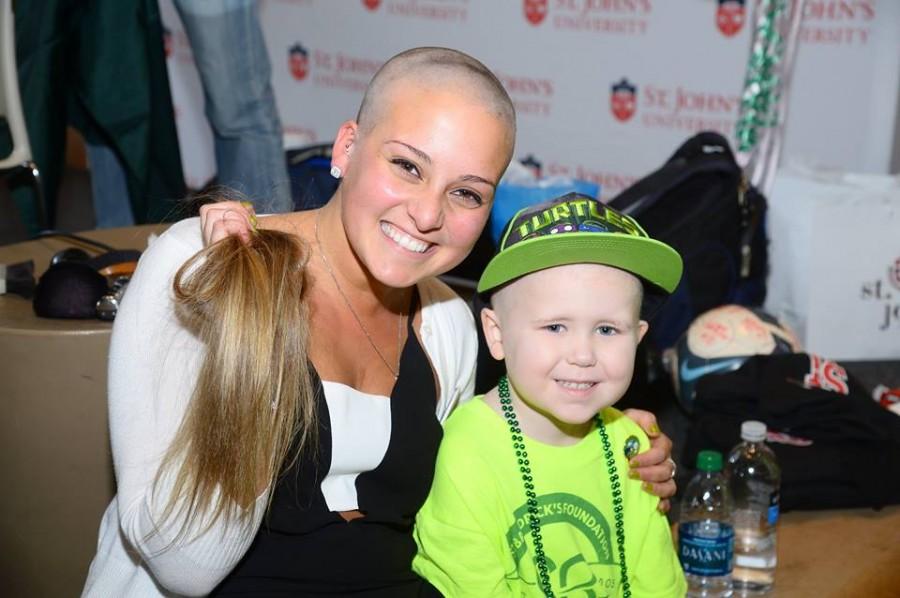 In the middle of her senior year, two months shy of graduation, Jackie Herro walked into the D’Angelo Center with a head full of hair—hair that would soon be in her hands and no longer on her head. It was March 20, 2014 during common hour when the buzzing of shavers and cheers of supporters filled the living room in DAC.

A year has gone by, and Herro reflected on one of the most memorable and profound times in her life.

Her day started out like any other: she felt completely normal, as if she wasn’t going to be bald within a few hours.

Herro found out about the event the year before, completely by accident.

“I was getting lunch in DAC during common hour and heard the commotion and walked over to see what was going on,” Herro said. “I couldn’t believe I had never heard of it before. I was ready to walk downstairs and do it right then and there but my roommates talked me into waiting for the following year so I was more prepared and could raise money,” she said.

“I’m thankful for that year because it gave me the time to raise as much money as possible, and buy really cute headbands,” Herro jokingly said.

She signed up early and created a fundraising goal of $2,000, and nearly quadrupled that by raising just over $7,000. Herro had almost 100 people sponsoring her, from friends and family, to friends of friends and even strangers.

“I will forever be blown away by the kindness of people and the way they supported me,” Herro said. “I had boutiques back in Jersey do fundraisers for me. A group of my girlfriends saved their change for months and that came out to over $200,” she said.

Herro recalled the morning of St. Baldrick’s Day and how one of her roommates decorated their house with balloons that had money hanging from the strings.

“I could go on and on. It’s still hard for me to wrap my head around the idea that so many people were willing to give in such fun ways to support me,” she said.

Herro has always been very passionate towards the cause. She has participated in many fundraisers and walks in the past, but never an event as big as St. Baldrick’s. She has been inspired to support childhood cancer research by her boyfriend in high school, Christopher.

“He has inspired me to do many things in my life,” Herro said. “He battled brain cancer for three years before passing away. During his journey, I spent a lot of time with him in and out of children’s hospitals and I saw some of the most heartbreaking things you could ever imagine,” she said.

According to Herro, Christopher was the influence behind her decision to participate in the event, but the money she was able to raise was aimed towards “all children battling illnesses.” Looking back at the moment of shaver to head, emotions flooded Herro.

“I cried the entire time they were cutting my hair, but never one sad tear,” Herro said.

When Herro was on stage and looked into the audience, she saw everyone she loves and the conscious thought of doing what she did for Christopher was an emotional ride. She needed a moment before she was able to look in the mirror or touch her head afterwards.

“Once I got the initial feel and look out of the way, I don’t think I have ever felt more beautiful or happy with who I was,” Herro said.

Herro learned a lot about other people as well as herself. Her eyes were opened to how much society focuses on appearances. Herro described the experience of going to get breakfast the morning after the shave with her friend, and how she got stared at countless times. At first, she said she felt strong and the stares didn’t bother her. After a few weeks though, she began to get a bit frustrated at people constantly staring.

“I didn’t care they were staring because I was bald,” she said. “I cared because it made me think – God forbid – I was actually sick and lost my hair due to an illness and they had no idea.”

She questioned if that was the way people looked at children or adults battling an illness.

“For whatever reason, being different is sometimes not accepted in this world we live in. But that made me even more proud to walk around with my bald head, living in solidarity with those who didn’t have a choice in losing their hair,” Herro said.

Herro never once regretted her decision to brave the shave. She spends much of her time volunteering and participating in events for different charities and continues to raise money and awareness for cancer research.

“I think people are petrified of the idea of curing cancer because it seems so out of reach,” Herro said. “But it is important to see that the little things, like volunteering and doing walks here and there will one day be the reason cancer doesn’t exist.”

“St. Baldrick’s was without a doubt the most amazing experience of my life,” Herro said. “I wish everyone would participate to see that something as little as donating your hair or cutting it all off can make a difference in the life of someone who hasn’t been as fortunate,” she said.