There to Here: Dr. Gempesaw’s journey to the U.S. 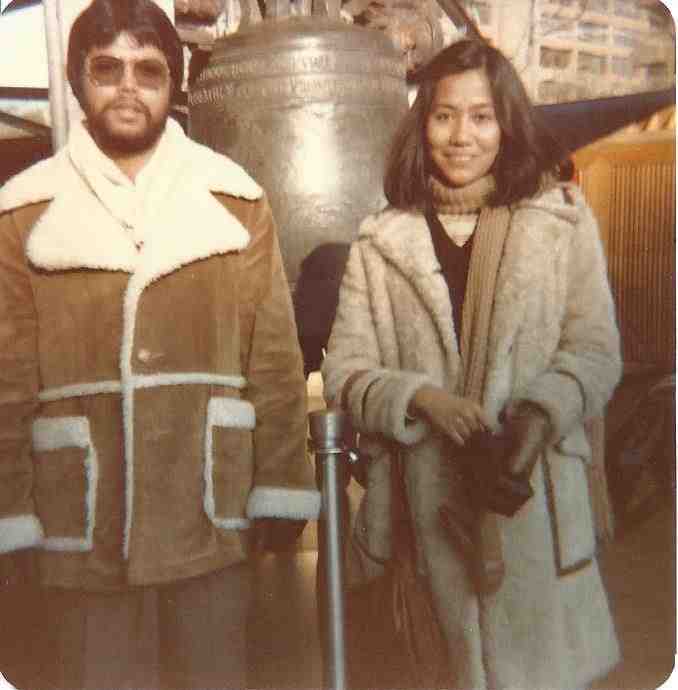 Dr. Gempesaw with his wife Clavel at the Liberty Bell in 1981.

A young boy from Davao, Philippines was playing a game of basketball during grade school, learning how to play from the American priests who doubled as his teachers. After he was finished with school for the day, the boy would head home.

The second-eldest of seven children in his family, he would gobble down lechon for supper, a roast pork dish that he would later become less fond of as he grew older.

Of course the boy would also eat balut, an infamous Filipino dish consisting of a boiled duck egg with the embryotic duck inside.

“It was a great childhood,” he said.

He grew from modest beginnings.

Both of his grandparents were travelers. His maternal grandfather was born and raised in Scotland before joining the Royal Mountain Police in Canada and later moved to Washington State. He then served in the American army under General John J. Pershing when he was sent to the Philippines on assignment. His grandfather took such a liking to the country that he remained there.

His other grandfather raised 18 children, though many of them were massacred before they had the chance to reach adulthood. They perished during the Japanese occupation. As the Japanese withdrew from the islands, the American army came back and the Filipinos traveled up to the mountains. The Japanese had the same idea, avoiding the Americans that were coming in from the sea, and went up the mountains where they met the Filipinos. A massacre ensued.

As the boy grew in age, he began to take an interest in the economics behind the agricultural industry of his country. The boy grew into a young man and earned an economics degree from Ateneo de Davao University.

He was then faced with a choice: stay in the Philippines or pursue a graduate degree in a foreign land. With some timeless advice from his mother, he made his decision.

“That spirit of learning more about other cultures and other nations was something that my mom would always remind us,” Dr. Conrado “Bobby” Gempesaw said.

He bought his plane ticket and traveled to the United States, filled with hope and ambition for his future.

“When I came to the United States I had one suitcase and it was heavy with dreams and determination,” Dr. Gempesaw said. “I didn’t really know what to expect when I came here.”

Upon arrival in New York City he went to the Port Authority Bus Terminal. He hopped on the Greyhound and, six hours later, arrived at West Virginia University. Filled with excitement to be in this new country, located in a relatively rural surrounding, Gempesaw found his first challenge.

He had to find a place to live.

Conrado was low on funds and did not want to spend it all so soon, so he sought out the international student office to look for a temporary living arrangement until he found a more permanent residence.

He then saw a Japanese student posting signs that read, ‘Wanted: Roommate.’ Bobby approached him.

‘I can be your roommate,’ the hopeful student said.

The Japanese student told him what the rent was and the young Dr. Gempesaw, still just one day into his journey, accepted and asked, ‘When do I start?’

‘A week from today,’ the Japanese student replied. The lease did not start for another week.

‘But I need a space for tonight!’ Bobby said.

“I still remember that day,” Dr. Gempesaw said. “The uncertainty and the excitement. You’re torn. There’s so much excitement, you’re in a new place, in rural America, basically.”

The Filipino native took a liking to the American culture. Different, yes, but people were always quite friendly towards him. He was filled with the excitement of this new chapter in his story.

Two weeks into his journey in America, Bobby was invited to a potluck party and enjoyed a great dinner. That night he called his girlfriend – now wife – Clavel.

‘What did you bring [to the potluck]?’ she asked.

He was confused by this question.

The struggles of an international student; but Bobby enjoyed life in the United States.

After he obtained his master’s degree in agricultural economics in 1982, Bobby traveled to Penn State to earn his doctorate. He then packed his suitcase and moved to the University of Delaware, where he began serving as the chairperson for the Department of Food and Resource Economics.

He worked at the university for 18 years until he accepted a position at Miami University (OH) in 2011, where he served as the provost and executive vice president for academic affairs.

But the Philippines still remained very close to Bobby’s heart.

During his tenure at Miami University, Dr. Gempesaw established an internship program with a law firm in his native country. Many of his students were very eager to call him about this popular Filipino dish.

“I arranged an internship program [in the Philippines] with one of the law firms and we would send our law students there every summer,” Dr. Gempesaw said. “And they would write to me and say, ‘I finally tried balut!’ It always comes up.”

Although just a common street food in the Philippines and Southeast Asia, eating a fetal duck in the shell is a concept that Westerners struggle to grasp. The texture of it, too, is certainly offputting.

“[Balut] is for the strong of heart,” Dr. Gempesaw said, laughing.

Then, in 2014, Bobby got a call from St. John’s University and again picked up his suitcase and went back to where his journey began: New York City.

Bobby arrived back in New York after accepting the job to become the 17th president of St. John’s University. He would become the first lay president in the university’s history, and the first to be born in a foreign country.

“[My family is] obviously very proud that someone from our city would be able to achieve this type of accomplishment,” Dr. Gempesaw said.

When Bobby was a kid in high school, he ran for secretary of school council and thought that his victory was all but assured.

He ended up losing the election, but the defeat left him with a lesson that has stuck with him his entire life.

“You cannot assume just because you want it, you get it,” Dr. Gempesaw said. “And it’s something that I learned growing up, that if I wanted something I must work for it.”

Bobby is no longer the only family member living in the United States. Currently, two of the university president’s sisters are living in America and his mother spends half her time here during the warm months, spending the other half of her time in the Philippines, when the weather gets frigid in New York.

Dr. Gempesaw is an ardent advocate for study abroad programs. He encourages international students today to not fall into the trap of assimilation, but rather branch out and mingle with students from all other parts of the United States and the world.

“It’s easy just to make friends with those who come from the same country as you have,” Dr. Gempesaw said. “Speaking the language is easier, but I really encourage both our international and domestic students to engage with each other because it’s only through that engagement that we learn from each other. Each of us as individuals, we bring a unique set of contributions to the educational process.”

Dr. Gempesaw jokes that even today he is still studying abroad.

He recognizes that not every student in the States, or at St. John’s University, will be able to study abroad in his or her time at college.

Dr. Gempesaw uses a term called “international networking,” where students from all parts of the world can have the opportunity to network with each other through study abroad opportunities to educate themselves and explore each others’ unique set of gifts.

“And how better can we prepare the next generation of American leaders [then] by allowing them to interact with others from other countries,” Dr. Gempesaw said. “So the way I look at it is that you learn about how to relate with the rest of the world by either going to their countries or bringing them here…So we are given that opportunity to interact with the best students in the world who will be the leaders in their country.”