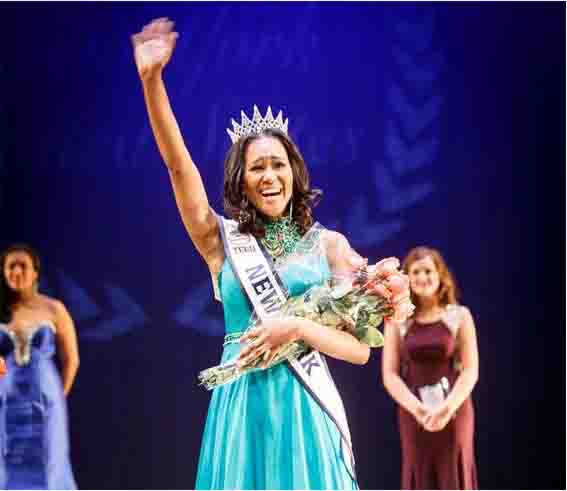 Andreia Gibau was overwhelmed with joy when they announced her as Miss Teen New York.

It was March 29, 2015. The room was filled with people anxiously waiting for what would happen next.

Over a dozen girls stood side-by-side on stage waiting to be judged. Each girl stood  with a confident smile on her face. They were all beautiful and each of them stoodout in their own, unique ways.

However, only one of them would leave with the crown.

While most college sophomores were preparing for the next big party, St. John’s University sophomore Andreia Gibau was getting ready for her next on-air interview. Gibau, a Boston native, was just crowned the 2015 Miss Teen New York USA.

“Everything changed within seconds,” Gibau said.

Gibau was in the spotlight from an early age. After modeling for eight years, Gibau’s drama teacher suggested she compete in pageants.

In 2013, Gibau took on that challenge and competed in her first   pageant, Miss Massachusetts Teen USA.

Gibau finished amongs the top 15 contestants in the competition.

Motivated to do more pageants, Gibau decided to participate in a pageant in her new home state, New York.

After searching for pageants to enter, she finally decided to apply to the Miss Teen New York pageant.

Self-motivated, she began to prepare for the pageant on her own.

While her friends were out on the weekend, Gibau walked up and down the halls of Marillac at St. John’sUniversity, perfecting her strut.

She would throw on some music and walk the night away, until the early hours of the morning.

Although Gibau could have  gotten a pageant coach, like many girls in the pageant industry do, she felt that it was too expensive and if she worked hard enough she could succeed on her own.

After a year filled with long nights practicing, Gibau was ready for the pageant. The three-day pageant event lasted from March 27 until March 29.

Throughout the pageant, each of the girls had to participate in four categories: swimsuit, interview, evening gown, and the popular on-stage question.

Gibau’s favorite part of it all was the interview because she likes to talk, and she knew that was the moment where she would be able to impress the judges the most.

“I was motivated by the judging process because I knew I was there to be judged,” Gibau said.

Although the process motivated her, Gibau said that her least favorite part of the competitive environment was the pressure it applied on herself and the other hopeful competitors.

Those four categories weren’t all that the contestants  needed  to worry about—the girls had to have a platform. Gibau’s platform was “Best Buddies,” a program that she founded  the chapter and is currently president of the progrm at St. John’s.

“Best Buddies” is a program that creates an opportunity for people with intellectual and   developmental disabilities to create one-on-one friendships, integrated employment and leadership development

The platform and dedication to service  caused Gibau  to standout in her division.

On the pageant’s last day, Gibau learned that all of her hard work finally paid off. She was named the 2015 Miss Teen New York.

Besides the desired crown, Gibau received the awards of Highpoint in Interview and Most Photogenic.

She was also offered a modeling contract with MMG New York.

Gibau said the whole experience was amazing for her.

Eventually, she plans to work on getting more young women into      pageantry.

“I think that every girl should do at least one pageant in her life,” Gibau said.

Gibau’s next pageant will be for the title of Miss Teen USA. Other plans include traveling toIndianapolis for “Best Buddies.”

In the future, she plans to be either a fashion correspondent or anything that would allow her to incorporate her intelligence with her “glamorous” side.

Gibau left an important piece of advice for girls interested in participating in pageants.

“Never doubt yourself,” Gibau said. “Put trust in God, and let it go.”