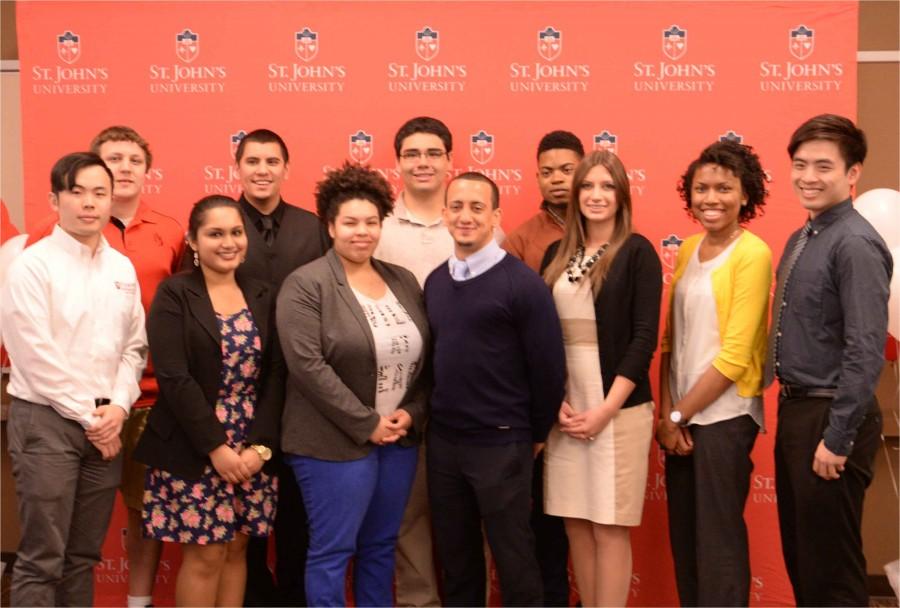 It was a beautiful spring afternoon at the University Center at St. John’s University: the smell of fresh flowers and freshly baked garlic bread filled the room. Dozens of faculty members and students invited to the Students Honored in Employment (SHinE) award ceremony were gathered around at assigned tables for the opening remarks.

Student workers can be found on all college campuses, and on April 14, St. John’s University hosted its first SHinE event.SHinE was initiated by the Office of Human Resources and student employment to recognize the most respected, hardworking and diligent students who work on campus.

“I am so happy that the students were honored because it’s a long time coming and they support the department so much,” Mary Cascio, student employment manager, said.

Student workers must have two consistent semesters of employment, maintain good grades, work a minimum of 10 hours a week and be a fulltime student in order be eligible to be nominated for SHinE.

There were 12 semi-finalists, and four students were awarded an honoree plaque and $500.

According to Cascio, the university decided to host their award program during the same week as national employment week, which took place on April 12-18.

The four students selected by the school will be represented in the 2015 National Student Employment Association.

Out of the 12 semi-finalists, Michael Andranvoich, an environmental science major and student worker for the Office of Facilities/Sustainability seemed to be the most recognized by the faculty at the event.

“Michael has got the qualities and passion to do the right thing with whatever he does,” Thomas Goldsmith,         director of Energy and Environmental              Conservation Facilities Services said.

The students recognized at the award program are known as the university’s best.

They are the most hardworking and dedicated students who take on their roles in the positions they hold, with professionalism and commitment to the learning experience.

“First off, I love my job. The position I have has really pushed me towards a future, not just in environmental science like sitting in a lab all day, but really working outdoors,” Andranvoich said.

As the awards were presented and the students were recognized, there was a recognizable trend in the qualities that all of the nominated students had—         they were all dedicated and went above and beyond what was assigned to them.

“I think it’s a great opportunity to   recognize the kids who work the hardest on campus,” Andranvoich said.    “I’m very happy I got nominated.”