St. John’s steps up to take back the night 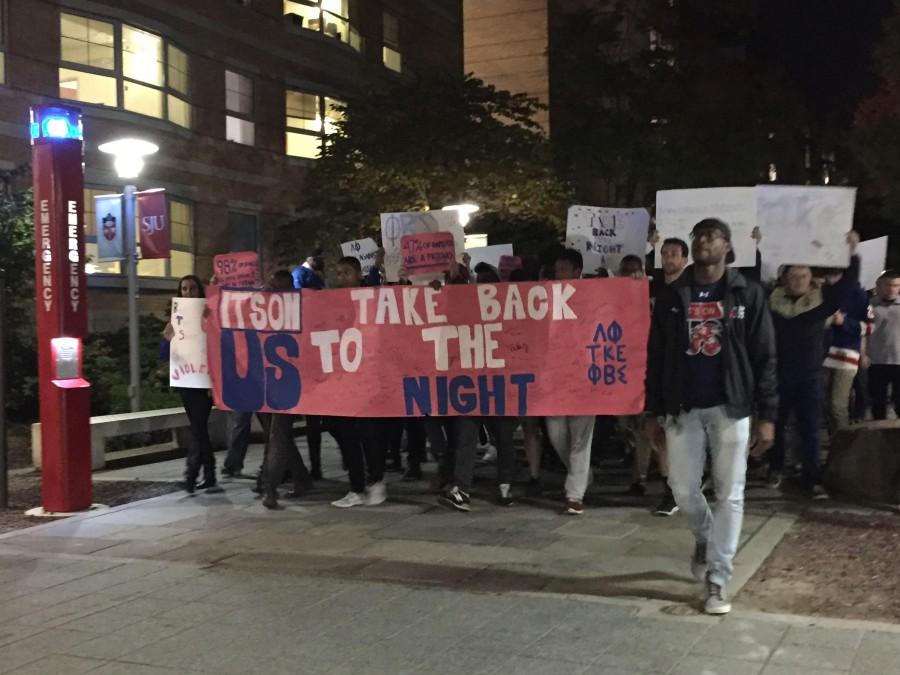 One in five women in colleges across the country face the horrifying realities of sexual assault.  Agonizing over their abuse, many of their stories go unheard as they suffer through their trial alone. This became a silent epidemic due to these victims not having a voice in society or having anyone intervene. However, the silence was shattered October 15 at St John’s during Red Steps up to Take Back the Night, an event organized by Student Wellness, Step Ya Game Up, Lambda Phi, Tau Kappa Epsilson, and Phi Beta Sigma.

Take Back the Night is part of a national campaign known as “It’s on Us” to raise awareness about sexual assault.

The night began with students leading a silence awareness walk to show their support for all the current and past victims, proclaiming their dedicating fight against sexual violence on our campus.

Adjunct professor and doctoral student Kandice Belluscio shared her story of how she managed to escape an abusive relationship, which she describes as revolving around “obsession and control.”

“When you’re in an abusive relationship it’s as your mind has become distorted and you can’t decipher what is realty and what isn’t. I lost who I was. “ Belluscio said. “Domestic violence is not black and white. It is not limited to certain groups of people. It doesn’t just involve physical altercations, and it truly knows no limits.”

Step Ya Game Up, St John’s official step team, showed their support leading a powerful dance and encouraging anyone and anyone that knows someone suffering from sexual violence to speak up.

Hannah Artiles-Stravers, the assistant director for violence prevention holds Take back the night during what is known as “the red zone” or the first 6 weeks of school when perpetrators are more likely to take advantage of vulnerable students.

“Student Wellness’ Mission is that our students have holistic wellness.” Artiles-Stravers said. “If students are being assaulted they don’t have wellness.”

Artiles-Stravers also teaches a class for bystander intervention urged students to follow what she calls the 3Ds: Direct, Delegate and Distract when they witness to someone facing sexual violence.

“I think this is important because I deserve to be able to walk around my school knowing that I’m safe and that some students here are watching out for my safety as well,” Junior Somalia-Rose Muhammad said. Junior, Henry Codron, President of Tau Kappa Epsilon felt it was part of their duty as part of Greek life to support this cause. “Fraternity and Sorority Life have a negative stigma when it comes to sexual assault”, Condon said.

He said that their organization came together to prove they are not in favor of sexual assault.

The loudest message of the night is if you or anyone you know is a victim of sexual assault, breaking the silence could possibly save a life.